He's Not As bad As They Said He Was 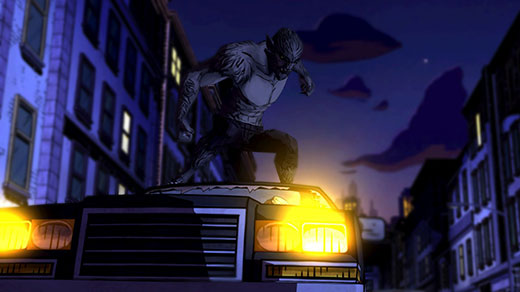 HIGH A satisfying wrapup to a strong series.

The fifth and final episode of Telltale's The Wolf Among Us

is now available. Titled Cry Wolf, the murder investigation that's taken Bigby and the rest of the Fables through a dark, twisted mystery finally resolves, and I'm happy to say that the developers deliver a satisfying conclusion to a strongly-written series.

Cry Wolf runs for about the same length as the rest of the episodes—90 minutes, give or take—but it's much heavier on QTEs than the previous ones. Players should definitely have a cup of coffee or catch a quick nap before beginning, because speedy reflexes will be required to come out on top of every situation. Otherwise, there are no puzzles and almost no environmental exploration. While that was a weak point for some previous installments, it feels appropriate this time thanks to the fast pace and focus on action.

Another success for Cry Wolf is the chunk of dialogue that comes after the beatings cease. Although I don't think staging A Big Narrative Recap & Wrapup really worked at the end of The Walking Dead's first season, it's more welcome this time since it makes more sense in a murder mystery than a survival story. Along the same lines, the callbacks and discussions between characters made me glad that I played The Wolf Among Us the way I did—I'm content with almost all the choices I made, but I am quite curious to see how things would've gone if my Bigby had been more brutal, or less concerned with justice than he was.

From a meta perspective, now that I've played through all five episodes and seen the story from start to finish, I think that the delay between releases was too long. If I had the chance to do it over, I would avoid playing piece by piece, and would instead play the whole series in one or two sittings.

While having a cliffhanger at the end of each Walking Dead episode worked because the stakes were so high and the content was so straightforward (will they die, or won't they?!?) that same feeling of breathless suspense did not apply in Wolf. Rather than building tension, the only effect the pause between installments had was that I forgot the details of the previous episode, and in a murder mystery, that's a problem. For instance, there's a revelatory scene in Cry Wolf that should have popped, but it fell flat because I couldn't recall the specifics that came before. The episodic format might work for certain things, but it wasn't a great fit here.

Despite the story-dulling pauses and my previously-mentioned concerns with technical production and the diminishing presence of gameplay content besides QTEs, The Wolf Among Us

has been an excellent series that I've enjoyed very much. Detective stories (noir or otherwise) are woefully under-represented in gaming, Bigby is a complex protagonist, the visual design is saturated with style, and the overall concept was a truly faithful interpretation of the source material—it even ended well! I'd have no problems recommending this to fans of the Fables comics and newcomers alike, and I look forward to seeing what Telltale does next. Rating for Episode 5: Cry Wolf: 8.5 out of 10. Rating for The Wolf Among Us overall: 8 out of 10.

Parents: According to the ESRB, this game contains: Intense Violence, Blood and Gore, Sexual Themes, Partial Nudity, Strong Language, and Use of Alcohol and Tobacco.  Although it might be tempting to have little ones sit next to a parent playing the game due to the fairytale nature of the story, don't be fooled – the game is aimed squarely at adults thanks to some graphic instances of violence (fights, bloody gunshots, etc.), plenty of salty language, and an overall tone that's very dark.  Nothing about this game is appropriate for kids, so please keep them clear and play this one after bedtime.

Deaf & Hard of Hearing Gamers: The subtitle mess from last episode has been sorted out and the conversations in every scene are now clear. There are no audio cues necessary for play, so with this fix, the game is again totally accessible.

I didn’t get the final bit at the end initially because you had to remember one line back from October.

Then I got it and thought, well that’s kind of clever I guess.

Yeah, a prime example of how the long pauses can detract from the game’s impact. My experience there mirrored yours, almost exactly.