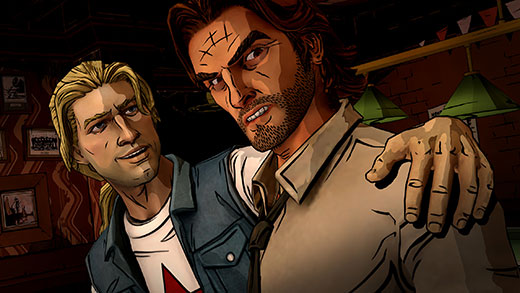 LOW Messing up a tense QTE because the controls were switched.

WTF Why are my responses to Flycatcher coming out so harshly?

The third episode of The Wolf Among Us from Telltale Games is now available. Titled A Crooked Mile

, it continues the murder investigation that kicked the series off and takes the Big Bad Wolf to ever-darker, ever-nastier corners of the Fables world.

As is the norm when reviewing story-based games, I'll refrain from providing specifics. Discussing plot info would be incredibly spoilery, especially since it's a murder mystery. However, what I can say is that Telltale is back to firing on all cylinders. The second episode (Smoke & Mirrors) felt a little undercooked, but A Crooked Mile is meatier, more intentionally-paced, and really lets players dig into the intrigue.

Just like any good noir tale, information is learned and clues are found as Bigby pokes around, and along the way, Bigby will again have the choice to go to a few different locations, the way he did in Episode One. Although it's a small thing, it gives the player a sense of being in charge, which is important since he's the one doing the legwork, and that bit of agency helps sell the experience.

On the other hand, something that feels slightly off is that Bluebeard's character isn't well-defined, and his relationship to the proceedings is unclear. It's a little late now, but I wish that the writers had given him a more formal introduction. As it stands, I'm not sure why he's being so pushy, or why Bigby and Snow are taking it. Otherwise, the case is unraveling quickly enough to feel as though progress is being made, but there's still plenty of mystery left to carry the final two episodes.

Besides the questioning and clue-finding, there are several action sequences in A Crooked Mile and I'm a fan of these intricate QTEs and the different ways they can play out. However, I'm starting to feel like a broken record when I say that Telltale should settle on a better control system. In one particularly tense scene, control of the action jumped from the left thumbstick to the right, and I kept failing the sequence because of the unexpected switch. This weirdness in the controls is bizarre, and complicates something that should be simple and instinctual.

Technically, the art style is still moody and amazing, with oversaturated colors turning the Fables world into intensely-contrasting scenes of pinks, purples, and neon that cut through the night. It's a feast for the eyes, and a perfect fit for the subject material. That said, the game still doesn't perform as well as it should on 360. Although the framerate isn't as bad as it has been with the last two, the loadtimes are still so chunky that I nearly got up to reset my system a few times because I thought the console had locked up. It should really run smoother than it does.

As a reviewer, it's difficult to give a breakdown of each episode because talking about specifics would ruin it for anyone who hasn't played, and since each new installment comes out so soon after the last, it's not surprising to see the same compliments (and complaints) popping up consistently. That aside, I think it's fair to say that A Crooked Mile

is a more substantial chunk of content than Smoke & Mirrors was, and I'm eagerly looking forward to seeing what happens next. Rating: 8 out of 10.


Disclosures: This game was obtained via paid download and reviewed on the Xbox 360. Approximately 1.5 hours of play were devoted to the single-player mode, and the content was completed. There are no multiplayer modes.

Parents: According to the ESRB, this game contains: Intense Violence, Blood and Gore, Sexual Themes, Partial Nudity, Strong Language, and Use of Alcohol and Tobacco.  Although it might be tempting to have little ones sit next to a parent playing the game due to the fairytale nature of the story, don't be fooled – the game is aimed squarely at adults thanks to some graphic instances of violence (fights, bloody gunshots, etc.), plenty of salty language, and an overall tone that's very dark.  Nothing about this game is appropriate for kids, so please keep them clear and play this one after bedtime.

Deaf & Hard of Hearing Gamers: for the most part, there's no problem.  Almost all of the dialogue is subtitled and in different colors to indicate which character is speaking. This episode is quite accessible for hearing impaired players

Hey Brad, thanks for your review. I personally think that it would be better if this game would be reviewed once all the episodes are in. I think the current way of publishing is solely a way to generate more/prolongued attention and thus advertising. A game is not like a tv series, and I for one will only play this (just like Walking Dead) once I can play all the episodes in once. I wonder if I am a majority/minority with this, but to review just an hour and a half gameplay? Doesn’t make sense to me. I guess you… Read more »