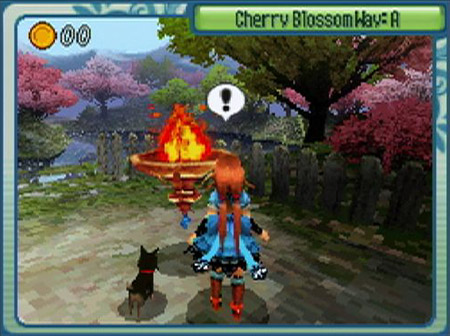 I've been putting a little time into The Wizard of Oz: Beyond the Yellow Brick Road on DS. I love games that repurpose classic characters or stories, and the saga of Dorothy Gale is certainly known far and wide. Sweetening the deal, the art style is very attractive and I have to admit I was kind of a sucker for the idea of having a four-character party made up of the iconic film characters.

Dorothy casts Heal! The Tin Man attacks with his Axe!

I'm not too far into it, but to be frank, playing the game is a very puzzling experience. Mentally, it seems pretty obvious that I should not be enjoying it—it's a bare-bones basic RPG framework (very beginner-friendly) and the gameplay consists of having Dorothy run down a long series of paths while smacking down various fantasy creatures. I put a number of hours into it, and so far it doesn't seem to get any more complex or varied than this. There's not even any story carrying it.

I let the wife have a go at it, and she quit out of boredom after about two or three hours. I totally understand why she did and I don't blame her at all. I mean, I really don't know why I haven't quit it myself. I see no compelling reason to keep playing, and yet… I do.

In other news, Spike's Videogame Awards are now accepting votes for this year's ceremony. In the RPG category, Demon's Souls is one of the nominees—and if there was ever a game that deserves every bit of props it could get, Demon's Souls is it. If you haven't already voted, go and cast your ballot. 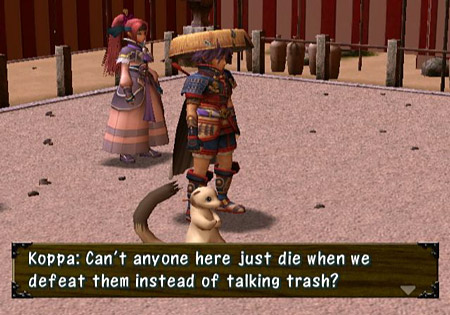 Speaking of Atlus games, news has started to trickle out about the upcoming Shiren the Wanderer for the Wii. Set to release on February 9, this is absolutely one of my most anticipated games for the foreseeable future.

In case you missed it, I picked up a copy of Mystery Dungeon: Shiren the Wanderer on DS a while ago and blogged about it obsessively for a few days.

I knew very little about it except for the fact that it was a Rogue-like, but it didn't take me long to fall in love. More than anything, I admired the unyielding discipline of the developers and the way they implemented the rules of the game consistently and fairly from start to finish. It was certainly difficult to be sure, but it was one of those rare games that never felt unfair or cheap. If I died, it was due to my own error and I would always immediately restart, completely motivated to redeem myself. Hearing that Atlus was going to bring the Wii sequel to the states put an immediate smile on my face.

You can read up on the game at the official blog site, and if you are at all interested in the sort of game that's not afraid to ask a little more from players before giving up the credits, then you'll want to keep your eye out for this one.

Finally, before leaving the topic of games, I'm getting near the end of my must-play list for 2009. At the moment, the only significant titles left to get to are Batman: Arkham Asylum, Uncharted 2: Among Thieves, and Assassin's Creed 2. If what people tell me is accurate, then this basically means I'll be playing three of the best games of the year back-to-back… definitely looking forward to a string of high-caliber hits like these. Hopefully they'll live up to their respective reputations.

In the meantime, if you've got a suggestion for a title that you think I should take note of before putting together our year-end wrap up, post a comment here, hit me up on Twitter, or send me an e-mail and let me know what you think deserves some recognition.

This looks so cool 🙂