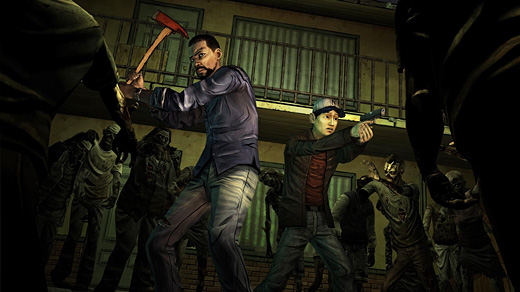 Started playing (and finished, actually) The Walking Dead, Episode 1—A New Day on Xbox 360 last night. It runs about two hours and costs $5. For fans of the comic/show, it's an absolute must-play.

It's best described as a combination of point-and-click gameplay with some Heavy Rain thrown in, and the mood and atmosphere are just perfect. I'm really not a fan of the obtuse, nonsensical puzzles this genre often relies on, but I'm happy to say that they are mostly avoided here. There were two times when I was scratching my head a little bit, but for the most part, all the focus is on the story and the puzzles are solved pretty logically.

The pace is fast, some familiar faces from the show/comic make an appearance, and there are plenty of significant choices and heavy situations that crop up. It's not perfect (my full review is on the way) but it's absolutely worth the cost of a double tall mocha and is a great addition to the Walking Dead franchise.

By the way, I played it on 360 and found the picture to be quite dark at times… I've heard that both PS3 and PC don't have that problem. Heads up!

In other heads-up news, the good people of @SignalStudios have stealth-launched not one, but TWO new add-on DLC packs for Toy Soldiers: Cold War.

I'll skip the run-down since I'm guessing most people who read this blog already know about Toy Soldiers. The series has been one of XBLA's all-time best sellers since it debuted, and if you crave more, both Napalm and Evil Empire are available and ready to play at this very moment.

I haven't cracked them yet myself (going to do just that once I post this blog, in fact) but these guys don't make bad games. If you didn't know these DLCs were coming—and really, I don't think many people did—then you have just been informed.

I finished the Wolfenstein RPG today (iOS) but only after much heartburn… like most iD shooters, the developers take some absolutely cheap shots at the player in terms of design, and what starts out as a clever, fun title turns into something that will make you gnash your teeth and go to GameFAQs in search of a God Mode. (And yes, there is one, although I am proud to say that I did not use it to finish…)

I still recommend it, but I would caution anyone starting it to be aware of what they're getting into. iD can be some real bastards at times. 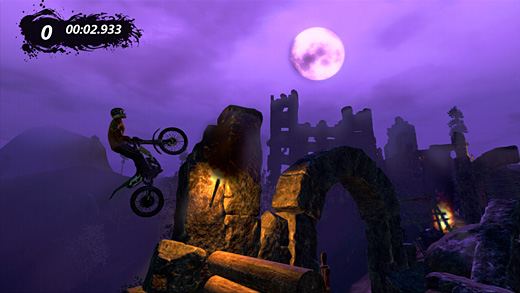 While I was still raging over the infuriating cheapness of Wolf's endgame, I jumped back into Trials Evolution and used my fuming anger to complete the last two Extreme tracks that I hadn't finished. I knocked them out one right after another, and the day before I had finally gotten around to finishing the final Extreme in Trials HD that had been left undone for two years.

At this point, I've now at least Bronzed every track in the series, and I've got to say, it feels pretty damned good. Trials on Extreme is some of the hardest, most brutal stuff in all of gamedom if you ask me, so being able to complete the tracks (even if my times/faults are garbage) is definitely good enough for me.

I mentioned it on Twitter the other day, but I recently played through the demo of Sniper Elite V2 (360) and it was a hell of a lot of fun.

I'm a sucker for sniping in games if it's done well, and I had high hopes for the original Sniper Elite. I'm sorry to say that it completely did not scratch the itch back then, but V2 seems to take the same concept from the first game and polish it up quite a bit. The graphics are a thousand times better, the controls feel smoother, and the developers have added frequent and varied kill-cam shots that Never Get Old. There's even one that mimics the new Mortal Kombat's X-ray supermoves… it's pure giggles.

I was only partially interested in it before playing the demo, but it's definitely going on my must-play list now. If the full game is as entertaining as that little section I saw, it will make for one fine weekend.

At the time I'm writing this, there are approximately 19 hours left for fans of SoulCaster and Escape Goat to buy limited-editionT-shirts offered by @MagicalTimeBean.

Both of these titles (XBLI) are FAB-U-LOUS, and if you're a fan the way I'm a fan, you'll want to jump on this before time is up.

One final thought for the night before I sign off—I'm not a fan at all of on-disc DLC (AKA ransomware) and I see common sentiment in gamedom echoes that. However, I was thinking about it the other day, and it struck me as a little odd that Skylanders is one of the biggest offenders out there, if not THE biggest, and nobody has said a peep about it.

Don't get me wrong, I think the game is great and having little figures to collect is fun, but unless I'm totally incorrect, the disc has something like thirty characters, four new environments and a few random odds and ends on it, and buying these figures just unlocks them. I mean, I'm not an expert on exactly how the chips embedded in the figures work, but it doesn't seem likely to me that the information necessary to access a character or whatnot is completely contained within the figure itself.

If my guess is correct about the extra content already being on the disc, that adds up to something like $400 needed to see it all (not including the initial game purchase) and that's no small sum, yo.