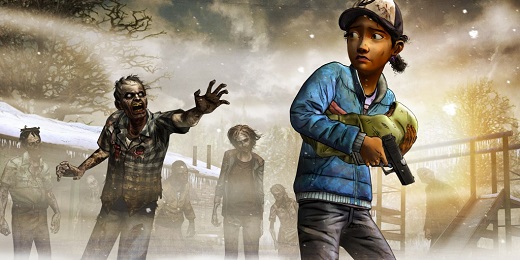 HIGH The brief chat near the end.

LOW Seriously, there's no "Let's go the OTHER way" choice?

WTF It looks like Clem's drunk in camp though she didn't have a drop.

With the release of Episode 5: No Going Back, the second season of Telltale's The Walking Dead is now complete, and to give credit where it's due, it was a strong way to close what was a largely underwhelming sophomore series.

After being quite dissatisfied with the first three episodes, the fourth (Amid The Ruins) displayed a marked upswing in quality, and I'm happy to say that the closing chapter was just as good. I would be curious to know whether the difference in tone, content, and quality are attributable to different teams of writers, or whether Telltale was responding to feedback from players like myself who felt like things were on the wrong track. Whatever the case may be, there's no question that this arc finishes much, much stronger than it starts.

So what's different about these final two episodes? I touched on one change in my review of Ruins… A big part is that the violence is used more sparingly, and as such, more effectively. It doesn't feel nearly as gratuitous as it did earlier.

There's also quite a bit of time taken to enrich the survivors in No Going Back. Initially it seemed like the writers were in a hurry to introduce (and then kill) people at a brisk pace, and I never grew attached to them the way I did to the cast of the first season. Now that we've had two episodes in a row with deeper conversations and events that aren't so rushed, these new folks started to grow on me. I can't recall the names of the characters from the beginning of the season, but I do remember those from the end, and I think that's pretty telling.

Those two factors are significant, but more importantly, it's now easier to see Clementine as the kind of character capable of anchoring the story. The previous episodes were awkward and jarring because Clem was mostly reacting to the grownups around her, or being shoved into situations that didn't make a lot of sense. The story is obviously about her character maturing, but things like adults (who were practically strangers!) deferring to her or putting her in charge of tasks made the tale hard to buy into. Recent scenes feel more natural and believable, and as such, she finally starts to feel like she's driving her own narrative.

Interestingly, some of the strongest sections of No Going Back (and the series overall) are built on things established in the first season. That significance is a testament to how strong that arc was, and the writers were smart to incorporate it.

In comparison, I'm curious to see if season three will have similar touchstones calling back to season two, but I suspect not. Too much of its running time was spent on things that had little impact, the characters had wide emotional swings, and there wasn't a satisfying amount of weight until the end… The first season of The Walking Dead was an incredibly hard act to follow, and season two seemed determined to hit all the wrong notes.

In fact, I was this close to simply quitting the series and not coming back, but Clementine & co. definitely recaptured some of the original Walking Dead magic before the final credits rolled, and I was grateful for that. In fact, things ended so well that I'm genuinely looking forward to the next season, and no one's more surprised about it than me.

Disclosures: This game was obtained via publisher and reviewed on the Xbox 360. Approximately 1.5 hours of play were devoted to the single-player mode, and the content was completed. There are no multiplayer modes..

Parents: According to the ESRB, this game contains: intense violence, blood and gore and strong language. There's no question that this game is absolutely intended for adults and no children should play or watch. Some of the scenes are brutal, and there's plenty of zombie-themed gore to go around. It's great, great stuff, but only for big people. Keep the kids away.

Deaf & Hard of Hearing: Subtitles are available for all of the dialogue—and there's a lot. The great news is that the developers go further than most, and included different colors to signify which character is speaking. It's a great addition and really helps make the cut-scenes easy to follow. In terms of the gameplay, there are no significant audio cues, so gamers with hearing issues can jump right in. .