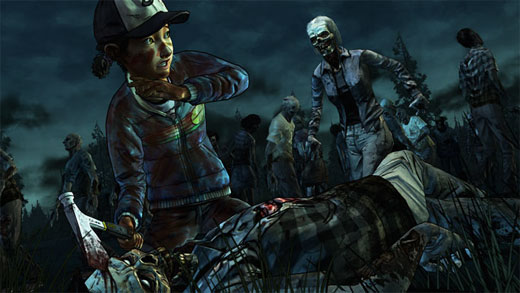 LOW The episode is trying a little too hard to show fearsome brutality.

WTF The weird facial expressions Clem makes when "…" is her response.

At this point in Telltale's second run on The Walking Dead

, I feel like I'm in a tough place. I wasn't a fan of the previous two episodes, and I've been hoping that this new series would hit its stride and suck me in the way season one did, but it's just not happening.

The reason The Walking Dead in any of its forms is such a compelling piece of fiction isn't the zombie-killing/survivor-getting-gruesomely-eaten action, it's the examination of the human condition under the incredible pressure of a theoretical undead apocalypse. The first season did a fantastic job of nailing this theme by presenting a great cast of characters that players could get to know over time, and then keyed in on the emotion of having these important people in danger or conflict. The second season has lost sight of this and gravitates towards rapid storytelling without giving much opportunity to become invested in anyone or anything.

In this third episode, Clementine and the people she's traveling with (I refuse to call them her group) end up in the clutches of the antagonist. While being held in his compound, things happen very quickly and the game has several obvious "you are supposed to feel something here" moments. I didn't. Frankly, I didn't like these characters to start with, and the new faces players meet have little to establish them. I understand that this is a different situation and that in this context, it would be impossible (and perhaps unwise) to mirror the structure of the first season, but the game doesn't have a fraction of the weight it did last time around, no matter how nasty or brutish the characters are to each other.

Compounding this lack of engagement is the fact that episode three hardly requires any interaction at all. With no puzzles whatsoever, the overwhelming majority of time is spent watching things play out and occasionally selecting a dialogue choice. There are two (maybe three?) scenes when the player can walk around and a few QTEs of fending off undead, but otherwise, it's just a lot of watching. I don't expect The Walking Dead to be an action game, but I do enjoy the feeling of having some agency and actually doing things once in a while. This episode falls heavily on the side of ‘interactive movie'.

As someone who couldn't wait for each new episode of the first season, it's incredibly disappointing to see this new series falling so wide of the mark. Of course, following such a phenomenal work is no easy feat, but this stuff hasn't even been in the ballpark. I was ready to forgive a couple of rough episodes as long as things got rolling by the midpoint, but with only two installments left, it seems unlikely that The Walking Dead, Season Two

will be able to muster anything that season one didn't already do better.  Rating: 4.5 out of 10

Disclosures: This game was obtained via publisher and reviewed on the Xbox 360. Approximately 2 hours of play were devoted to the single-player mode, and the content was completed. There are no multiplayer modes.

Parents: According to the ESRB, this game contains: intense violence, blood and gore and strong language. There's no question that this game is absolutely intended for adults and no children should play or watch. Some of the scenes are brutal, and there's plenty of zombie-themed gore to go around. It's great, great stuff, but only for big people. Keep the kids away.

Deaf & Hard of Hearing: Subtitles are available for all of the dialogue—and there's a lot. The great news is that the developers go further than most, and included different colors to signify which character is speaking. It's a great addition and really helps make the cut scenes easy to follow. In terms of the gameplay, there are no significant audio cues, so gamers with hearing issues can jump right in.