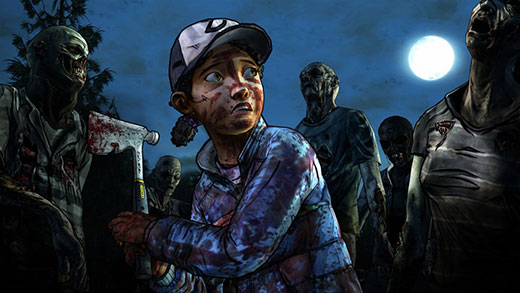 HIGH The extended chats with Jane.

LOW You seriously aren't going to check for walkers before going in?

WTF Why weren't the earlier episodes this good?

, it's no secret that I haven't been a fan of the second season. The last three eps have simply failed to deliver what made the original so amazing—the characterizations haven't been rich enough, the copious violence hasn't felt justified, and there haven't been connections between myself and the characters. I liked season two so little that I was considering quitting after the last installment, but a fellow writer convinced me to give it one last chance, and I'm glad that he did. Amid The Ruins

has been the best episode of season two by far, and it went a long way towards reminding me how powerful The Walking Dead can be when done right.

As usual, I'll refrain from giving specifics in the interest of keeping things spoiler-free, but what I liked about Amid the most was that that writers took their time with the characters, and gave them a bit of room to breathe. Clementine has several opportunities to interact with fellow survivors away from the group, so the conversations get a little deeper and there's time to get a better sense of who these people are supposed to be.

That appreciation goes double for Jane, the standoffish loner introduced as an unknown quantity in episode three. The writers did a great job with her, and although I didn't sympathize with her entirely, it was easy to understand where she was coming from, why she was the way she was, and how she's a mirror for who Clementine could potentially be. It's pretty excellent stuff.

The violence in Amid also feels quite appropriate, and while not necessarily more graphic, it was definitely more gripping than it's been lately. The same goes for the choices on offer. I noticed that I paused before picking a response or action a lot longer than I have been—things here felt more important because I finally had some investment with the characters this time around. I even had a rare "I really shouldn't have done that" moment of the kind that popped up in season one, but not at all until now in season two.

I'm also happy to report that the player actually has something to do in this episode. Walking Dead and Wolf Among Us have been too much like barely-interactive movies lately, and although that's not completely fixed in this episode, it's better. There aren't any jarringly overt puzzles, but there are situations where Clem has to search around and figure something out or solve a problem, and the QTEs are also slightly more complex due to a story event. Although I wouldn't mind more to chew on in these games, Amid The Ruins is a step in the right direction towards something that's deeper than just story, but not as gamey as traditional point-and-click.

After finishing this episode, I turned my wife and told her how surprised I was at how much I enjoyed it. She hasn't started season two yet, but she knows my opinion and asked if she should forego the first three and jump in with episode four. As crazy as it sounds, I told her that she should. My gut feeling is that a player could easily skip the past events and get just as much value out of Amid The Ruins

Parents: According to the ESRB, this game contains intense violence, blood and gore and strong language. There's no question that this game is absolutely intended for adults and no children should play or watch. Some of the scenes are brutal, and there's plenty of zombie-themed gore to go around. It's great, great stuff, but only for big people. Keep the kids away.

Brad, Having followed your reviews on TWD: Season 2, I would have to say I have the same basic feelings about the game as a whole. First three episodes are mediocre, the fourth episode is “whoa! that was great, what’s going to happen next?” However, I don’t fully agree that a player would be fine just picking up at “Amid the Ruins”. After completing episode 4, I went back and messed around with two or three scenes from one of the episodes in season 1. I was amazed at how different Clementine’s character is in the original compared to where… Read more »

I hear what you’re saying and I *kinda* agree to a certain extent, but those episodes are just sooo bad. Honestly, if you just said…

“Clem’s group got killed, she fell in with some losers and then this new group got captured by an asshole. Then they escaped.”

…That pretty much sums up those three episodes for me. I mean, of course some detail’s left out, but the amount of good is pretty damned small compared to how much is just lame.