The longest walk goes on 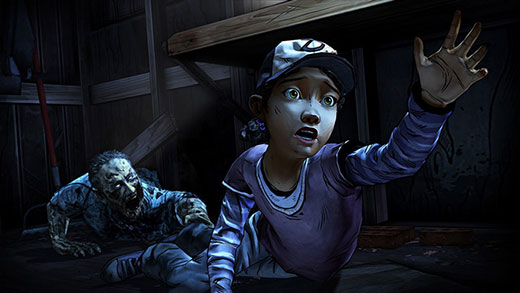 LOW six episodes in, and it still doesn't run smoothly?

After becoming a runaway success and topping so many Game Of The Year lists in 2012, there was never any question that Telltale Games would follow its landmark work, The Walking Dead, with a second series. However, what was uncertain was exactly who would be starring in the next episodic arc.

There was quite a debate as to whether the younger lead character, Clementine, should be involved, and if so, how. Personally, I was on the side of "should not be included" because the first season felt like such a complete story, and it ended (for the most part) so beautifully. Why mess with great work? However, Telltale had other plans and indeed continued with Clementine in the lead. I openly admit to having heavily mixed feelings about this decision, but there's no question that regardless of who it stars, I'm along for the ride.

This first installment of this new story arc, All That Remains

, takes place an undetermined amount of time after the end of the last, and then jumps ahead about another year. Not a lot is revealed in this first episode — the writers at Telltale are simply laying the groundwork for the following four chunks. I hesitate to share specifics about the plot since much enjoyment from a game like this is discovering the twists and turns, but it's obvious to say that most of the old cast does not return, there are zombies, and Clementine eventually meets a new group of people.

However, it's no spoiler to say that the mind twist going from protecting Clementine to directly controlling her as she's constantly in danger (almost ridiculously so!) is a major one. In fact, I did think the plot went a little too hard on her for her first time out of the gate, and one particular scene mirroring a notorious Season One event felt a bit excessive. It's a touch too early for some of what happens, I think.

Looking at the production side, it's disappointing to see that Telltale carried over some of its old tech and design problems.

I think everyone would agree that the most valuable part of The Walking Dead experience is the writing and storytelling, so there's no need for the developers to push graphical envelopes. That said, the loading times are chunky and the framerate suffers from brief episodes of chugging. Some sections were also excessively dark, which was an old problem specific to the 360. I'm not a graphics whore by any stretch of the imagination, but it's disappointing to see that after an entire season to work out the bugs, things still aren't running smoothly.

Design-wise, All That Remains feels more awkward than it should. For some strange reason, the developers can't seem to settle on one comprehensive control scheme. When walking around, pressing A gets most things done, but in action scenes, RT becomes the important button. Moving around in the world is done with the left stick, but in action scenes, it's done with the right. This kind of interface switch-up is mentally jarring, and it needs to be settled ASAP.

There were also a few sections that I found hard to navigate, simply because certain things were offscreen, or because it wasn't entirely clear where the limits of the explorable area were. When the player does not have camera control, developers need to make sure that everything is laid out clearly, and can be easily seen. In this regard, Telltale still has work to do.

is a bit rougher than I would've liked and not much got established, but I have confidence that the team at Telltale can turn out a good experience. I'm definitely looking forward to seeing where this goes. Rating: 7 out of 10

Disclosures: This game was obtained via publisher and reviewed on the Xbox 360. Approximately 2 hours of play were devoted to the single-player mode, and the content was completed. There are no multiplayer modes.

Parents: According to the ESRB, this game contains Intense Violence, Blood and Gore and Strong Language. There's no question that this game is absolutely intended for adults and no children should play or watch. Some of the scenes are brutal, and there's plenty of zombie-themed gore to go around. It's great, great stuff, but only for big people. Keep the kids away.

Deaf & Hard of Hearing Gamers subtitles are available for all of the dialogue — and there's a lot. The great news is that the developers go further than most, and included different colors to signify which character is speaking. It's a great addition and really helps make the cutscenes easy to follow. In terms of the gameplay, there are no significant audio cues, so gamers with hearing issues can jump right in.

“six episodes in, and it still doesn’t run smoothly?”

“This game was obtained via publisher and reviewed on the Xbox 360.”

Well, there’s your problem. This is why every Walking Dead episode I pick up the PC and bring it over to the TV. Telltale Games games do not run well on consoles. It can’t be patched.

My PC runs like crap, so PC isn’t an option until I replace it this year… In the meantime, there’s *no* reason a low-tech game like TWD should run so choppy. TT needs to hire some decent programmers and get it together.