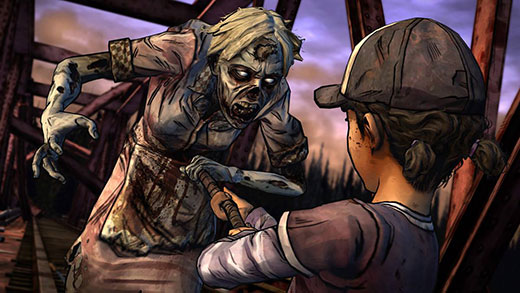 HIGH The big reveal was something I predicted during season one.

LOW Getting stuck on the hammer mini-game because the interface was unclear.

WTF What the hell is the deal with the peach cans?

is the second episode in season two of The Walking Dead from Telltale Games. As usual for my coverage of the series, I'll refrain from giving away plot specifics since much of the enjoyment comes from being surprised by the twists and turns, though that's not to say that there aren't things to talk about.

When Telltale launched this new series and it was discovered that Clementine was going to be the lead, I had some misgivings. I felt as though season one told a complete story that didn't need to be continued, and I was also curious to see how the writers would handle having a child as a main character. In this episode, some of my concerns have started to rear their heads.

The biggest issue is that the way the game sets up its interactions often feels false. Because Clementine is so young, it's hard to buy into the way the characters often defer to her, or ask her opinion on things. As a father of two children myself, the social mechanics here don't ring true, and instead of the action being driven by her (as it was with Lee) the NPCs act in noticeably odd ways in order to give her an opportunity to do or say something. Granted, Clem's smarter and more resourceful than the average person her age, but this new group hardly knows her and these instances don't feel earned or genuine.

An even bigger problem is that I have no connection with the new cast of characters. By trying to get the action rolling too soon, there hasn't been much chance to get to know anyone or relate to them. These characters aren't even very likable. Of course, I'll be the first to admit that not every character needs to be appealing or pleasant, but the tension that's supposed to make this game's choices difficult is absent because of this. Life-or-death choices aren't difficult to make if I don't care whether the subject lives or dies. In the previous series, I'd sweat and obsess over what I did and what I should have done. After finishing House Divided, I can hardly recall what the choices were.

Though there's not much to celebrate here, the high point of House Divided was meeting a character that series fans will be familiar with. I predicted the event long ago, and it was nice to finally see it realized. Players who put time into the 400 Days DLC will recognize someone else as well, but those who skipped it won't be missing out. The connection between that DLC and this new season seems to be largely irrelevant so far—players spent so little time with those DLC characters (it's that same problem again!) that seeing this one reappear carries no weight.

Although I'm a little sad, I'm not surprised to find that I feel far less invested and interested in the zombpocalyptic goings-on this time around. It's quite a change from when I was ravenous for each new episode of season one. The core of the Walking Dead

experience depends on the writers making a connection with the player, and for me right now, that's just not there. Without that, I'm just going through the motions without much worry over the consequences. Rating: 5 out of 10.


Disclosures: This game was obtained via publisher and reviewed on the Xbox 360. Approximately 2 hours of play were devoted to the single-player mode, and the content was completed. There are no multiplayer modes.

Parents: According to the ESRB, this game contains Intense Violence, Blood and Gore and Strong Language. There's no question that this game is absolutely intended for adults and no children should play or watch. Some of the scenes are brutal, and there's plenty of zombie-themed gore to go around. It's great, great stuff, but only for big people. Keep the kids away.

Deaf & Hard of Hearing Gamers subtitles are available for all of the dialogue—and there's a lot. The great news is that the developers go further than most, and included different colors to signify which character is speaking. It's a great addition and really helps make the cutscenes easy to follow. In terms of the gameplay, there are no significant audio cues, so gamers with hearing issues can jump right in.

In most video games, real life social dynamics don’t matter. Mario’s place in society as a middle-aged, male, Italian plumber and how different people react to that is irrelevant, for example. In Walking Dead, however, the basic premise is that normal, everyday people are thrust into a post-apocalyptic situation. Things like gender, race and age and the cultural norms surrounding those things come into play in subtle and not-so-subtle ways (the TV series, especially). Clementine’s age is a factor. They punted on the issue in the first episode in which she was on her own for half the time. Now… Read more »