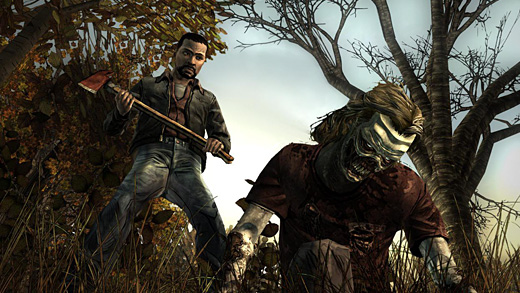 HIGH The "batteries" line near the end of the episode.

LOW Being shunted out of a scene before I was ready.

WTF Kenny's dialogue didn't match my choices from Episode One.

The second part of Telltale's episodic The Walking Dead series is now available for download, continuing the story of Lee, Clementine, and the rest of the survivors struggling to make their way through the brutal zombie apocalypse.

This series hinges on its storytelling and characterization, and as such, it is of the utmost importance that the five installments be played in order. Current events build upon previous ones, and choices made in earlier episodes have a great deal of impact on those that come after. If you haven't already played Episode One—A New Day, then do that before even thinking about taking on The Walking Dead: Episode Two—Starved for Help

For those players who are already up to speed, I have to say that it's nigh-impossible to talk about this episode without spoiling anything. A great deal of enjoyment from The Walking Dead comes from unexpected surprises and the need to make split-second decisions. I would be doing a great disservice to readers by ruining anything in Starved for Help, but I can say that the content is just as gripping and even darker (if that's possible) than what was delivered in A New Day.

Some may disagree with me, but the content is so heavy, in fact, that I feel the best way to enjoy this series is to play through without knowing what's ahead, and then stick to the choices that are made. It's tempting to go back and restart after seeing that results of telling one person this as opposed to that, or by going one way instead of another, but the situations are so grim and the tension so high, I'm of the opinion it would take away from the experience to go back and re-play for optimal results.

Under such self-imposed circumstances, I was glued to my controller—to say I was occasionally "white-knuckling" it wouldn't be much of an overstatement. As Lee and his group leave the safety of their roadside motel, things go from bad to worse… and then get even worse after that. By the time the episode is over, I doubt many people will walk away without a slightly sick feeling in their stomach. This stuff  is brutal, dark, mature, and absolutely fantastic. 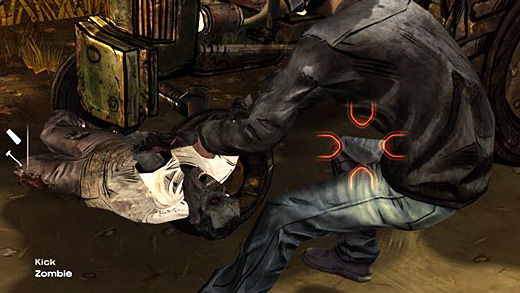 While Telltale is certainly knocking it out of the park with the characters and story in Starved for Help, the technical side of the game isn't faring quite as well. There are some rough edges that blunt the game's edge.

In terms of how the controls are laid out, it's problematic that the right stick is used to move the cursor to select an action, but then the player must let go of the stick to hit the buttons and perform the action. It doesn't sound like a big deal, but several surprise events have a very small window of opportunity, and this awkward transitional pause can cause problems.

I also noticed that in one area, I was investigating a certain thing and instead of checking it out, I was pushed ahead to the next scene before I was ready to leave. From that point on, I became hesitant to examine things for fear that it would happen again. A message asking "are you sure?" before leaving an area would be appreciated. The game also hitches and chugs at times, though I'm not sure if it's due to a pause while the game reads past choices, or if it's just some sluggishness in how it runs on the Xbox 360.

Something more concerning than those things were some apparent discrepancies in the script. Since The Walking Dead lives on the strength of its characters and the choices the player makes, it was worrisome to find hiccups when speaking to Kenny, one of the faces who carried over from Episode One.

In the previous installment, I backed Kenny to the hilt in every circumstance, yet in The Walking Dead: Episode Two—Starved for Help

, he acted as though we had conflicted in the past. His behavior didn't make any sense, and I couldn't tell whether the game was misreading my saved choices, or if the script was written in such a way as to not properly address them. It wasn't game breaking, but it felt jarring and even a little offputting. That sort of thing needs to be eradicated in future episodes in order for this series to properly cohere.

Despite those bumps, there's no arguing that Telltale is turning out must-play material with The Walking Dead, and unless the game somehow crashes and burns on an epic scale before it reaches the end of the fifth and final episodes, it's guaranteed to earn a spot on my year-end "best" list. Don't miss it. Rating: 8.5 out of 10.


Disclosures: This game was obtained via publisher and reviewed on the Xbox 360. Approximately 2 hours of play were devoted to the single-player mode, and the content was completed. There are no multiplayer modes.

Parents: According to the ESRB, this game contains strong language, blood and gore, and intense violence.Parents, there's no question that this game is absolutely intended for adults and no children should play or watch. Some of the scenes are quite intense, and there's plenty of zombie-themed gore to go around. It's great, great stuff, but only for big people. Keep the kids away.

I’m curious Brad, what your choices were – I do enjoy the end getting the summary of the choices I made, and how they compare to the rest of the community playing the game.

Hey Brad, just for the record you can use the d-pad instead of the face buttons on the controller to input commands. This means you don’t have to let go of the right stick. Anyway, I’m totally with you on this one. Because this is more of a piece of interactive fiction than a challenging game in the traditional sense, and one in which you highly invest in your decisions, I definitely recommend resisting the urge to go back and reload your game. Living with your decisions, warts and all (no paragon/renegade here)is what makes this game special. Heck, I’m… Read more »

I’ve also backed Kenny when everyone thought Duck might be bitten, but he said I did the opposite. Definitely a WTF moment.

That part is wonky. Basically, if you do anything other than completely tear into Larry at that scene, Kenny gets mad later and says you weren’t backing him. Also, if you check your stats for Episode 1, it will say you sided with Larry. I think most people try to be rational at that scene, initially ripping Larry off of Duck and calling him a maniac to protect the kid, but then later attempting to understand him to diffuse the situation and not cause any bad blood; that’s enough to trigger your “support” of Larry. I guess it’s one of… Read more »