This blog post is going to be about events that take place in The Walking Dead, Episode Three.

If you haven't already played this episode, do not read this post.

The entire content of what I'm about to say is a massive, massive spoiler, and I am not one of those people who thinks that knowing what happens ahead of time doesn't affect a player's enjoyment. I hate spoilers, I do what I can to avoid them myself, and I certainly try not to spoil anything for anyone else.

I say again, for clarity: if you have not already finished The Walking Dead, Episode Three…

So the other day, Telltale released this trailer which went over the various choices in Ep. 3 and showed the percentages of which players chose what. I found myself in the minority for every single option and it didn't surprise me that much; most of the decision points were evenly split, more or less.

However, the choice regarding whether the player would volunteer to shoot Duck was skewed heavily towards "would shoot him." In fact, the exact percentage was that 81% would do the deed, with only 19% making Kenny shoot Duck himself.

Although this number has grown since the first time I completed the episode, it was a similar ratio, even back then. I've thought about it quite frequently since that time, and it's been something that's stayed with me.

I thought that after I had the chance to discuss it with the rest of the critics on our podcast that I'd be able to get it out of my system, but I still didn't feel like I made peace with it. In fact, I think I even felt a little worse, since I failed to articulate this one particular point on the show, and it totally slipped my mind until after we'd finished recording.

As a parent of two boys myself, I think I was especially sensitive to the content of Ep. 3 for obvious reasons. It's entirely too easy to imagine myself in the role of the characters trying to survive the zombie apocalypse, and I could hardly think of a more stressful situation in which to take care of a child. Simple day to day care is already my most important job and the biggest challenge of my life to do well—adding zombies into the mix would push it through the roof. Hell, forget the roof… try the stratosphere. 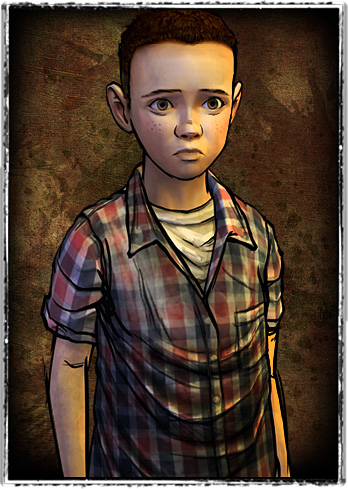 In any event, I've talked about this particular scene several times with other people, and it's always struck me that while explaining why someone chose one way or another, I've never heard anyone talk about making this choice based on Duck.

What do I mean?

Obviously, that the player must make a choice about putting Duck out of his misery is based on the fact that he's about to turn into a zombie after being bitten, but every person I've talked to—and I literally mean every single one—has made their case from the viewpoint of Lee or Kenny. Not a single person cited Duck's perspective as even a minor factor.

When I got to the scene myself, I think it's important to note that I was quite surprised to find that Katja didn't end Duck herself. Throughout all three episodes, she's always seemed to be a very caring, responsible mother, and I found it shocking to see that she took the easy way out by committing suicide and leaving Duck to slowly turn.  I genuinely did not expect that based on what I knew of her.

While it may have been somewhat false in terms of her character (or perhaps not) it's easy to see that this scenario was specifically crafted to put the player in the exact position of making this choice which has bothered me so much. After discovering that Katja was gone and that I, as the player, was at a pivotal moment, I chose to make Kenny pull the trigger, and here's why:

As a father, I work hard to do the best for my children that I possibly can, and that includes making choices which may not be palatable, yet they're done because they benefit my little ones. I'm often exhausted at the end of the night, but I read that third book before bedtime because my little boy wants it. There have been plenty of times when I wanted to zone out in front of a game or go write a review, but instead I sit down and build that train track because those are quality moments that are gone forever after they pass by. The best parent is willing to sacrifice some measure of their own satisfaction or self-fulfillment and if it comes at the cost of their child's. 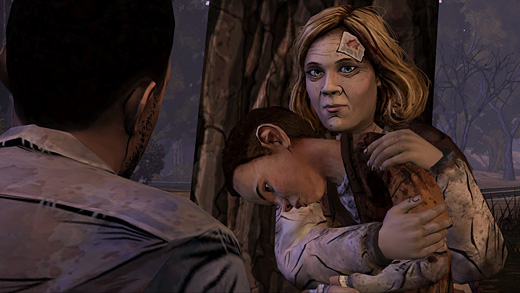 Of course, I can see why a player might choose either Lee or Kenny. There are certainly arguments to be made for both sides, and Telltale wants people to feel torn at every single fork in the road. That said, the fact that I have yet to hear anyone bring up what Duck might have wanted has been constantly nagging away at me.

Putting myself in Duck's shoes, it seemed only natural that he would want to see and be with his father before passing away, and by letting Lee take that final action, it would be as if Kenny denied his son the only possible comfort he could in what little time was left—It would be Kenny avoiding ending his own son's life for his own sake, rather than being strong and doing the hard thing for Duck.

Of course Duck was feverishly infected, and of course he may not even have been conscious at the moment when Lee and Kenny were standing over him, but what if he was somehow aware of what was going on? What if some small sliver of his consciousness was able to take in the scene around him?

It seemed to me that the only real option was to have Kenny take responsibility as a father and be there for his son in his final moments. By offering to pull the trigger, Lee was providing an enormous service to be sure, but the way I read this scene in relation to my own feelings, Kenny should have refused Lee and put Duck first. More than that, it seems like more players—the ones who have kids of their own, at the very least—should have at least mentioned Duck in their reasoning process.

I fully realize that this game is fiction, and that all of the characters involved are imaginary creations, but there's no denying the power and emotion that The Walking Dead is capable of creating in players. I just can't get over the fact that this poor little boy ended up as a thing that a decision was made about, rather than being treated as the young person deserving of compassion and consideration that he was.

I let Kenny pull the trigger in my game too, for the reasons you listed, but also out of a slight level of selfishness I was sort of hesitant to admit to myself. Kenny already seemed a little weirded out by the fact that I was a murderer – that’s all I need is him jumping up telling everyone how eager I was to shoot his son later on down the line. I love this game because of how little like a “game” it feels and how complex the decision making process is. I’m not making decisions based on solving… Read more »

I can see where you are coming from, but I do believe that at that point most people already counted Duck out. He was no longer seen as a character or a person, just a moral dilemma, like you said. My own thinking behind the decision of shooting Duck myself was that Kenny would still be hanging around for a while; this should be the best way for me to a) assure Kenny’s mental stability by at least taking the smallest amount of weight off his shoulders and b) to add to the debt/emotional connection that Kenny has towards me,… Read more »