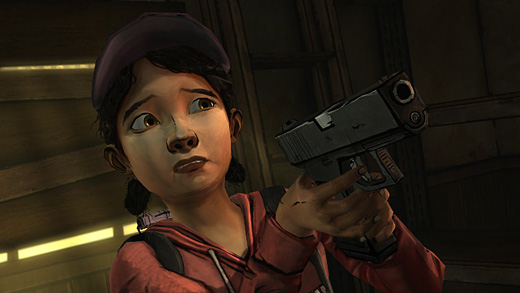 HIGH The intensity and emotion is unbelievably high.

LOW Are you REALLY not gonna let me grab that map, Kenny?

WTF A glitch made Duck invisible for a few conversations. Mood killer!

The third part of Telltale's episodic The Walking Dead series is now available for download, continuing the story of Lee, Clementine, and the rest of the survivors struggling through a brutal zombie apocalypse.

For those who might not know, this series hinges on its storytelling and characterization. As such, it is of the utmost importance that the five installments be played in order. Current events build upon previous ones, and choices made in earlier episodes have a great deal of effect on those that come after. Don't consider playing The Walking Dead: Episode Three—Long Road Ahead

if you haven't already played the first two episodes.

For those who are up to speed and curious about the quality of Episode Three, I have to admit that I'm once again in an impossible situation—it's devilishly difficult to discuss the plot without massive, story-ruining spoilers, and with an experience such as this one, even the smallest bit of foreknowledge can have catastrophic effects.

Well, I can start by setting the scene: the situation at the roadside motel where Lee and the group are living becomes untenable, and changes occur. I can also say that I feel Long Road Ahead was the most intense, stressful, and emotionally impactful episode in the series so far, and it's not like the first two were lacking in those departments.

Anyone familiar with the Walking Dead comics or television show can probably guess the kinds of dilemmas that these characters will find themselves in, so I don't think I need to spell out what lies in store. However, certain twists did come as a total surprise, and my role as the decision-maker frequently presented me with choices that I would have done anything to avoid.

Without overselling it, the writers do an unbelievable job of drawing the player into the story and making them care. This DLC may be just a game, but I frequently find myself afraid of what lies in store, while at the same time, I'm desperate to see what happens next. I feel a connection with these characters, and can relate to their thoughts and feelings.

In fact, Long Road Ahead does such an outstanding job of this, I found myself on the verge of tears in one of the episode's most powerful moments. Eliciting that kind of response from a person is a real triumph for any writer or any story. Any game developers currently striving to take things to the next level would do well to forget about motion technology, VR goggles and photo-realism, and take lessons from what The Walking Dead has achieved here.

While Telltale continues to trump nearly everything else out there with story and characters, its technical side is still in need of a little polish. When the game launched, I heard several accounts from fellow reviewers of glitches that made them lose progress and restart certain scenes. While I didn't experience data loss myself, at one point, the game got its wires crossed and made one of the characters (Duck) turn invisible. Unfortunately, it happened at the worst possible time, and what should have been a very emotional scene instead became bizarre, and inappropriately comic.

In any event, my quibbles with this series are quite small, and easy to forgive when compared to the overall experience that Telltale is crafting. There's nothing else available today able to affect me to a similar degree, or that can resonate with me as a human being. That's the sort of thing that carries a great deal of weight, and it makes The Walking Dead easily one of 2012's best. Rating: 9.0 out of 10.


Disclosures: This game was obtained via publisher and reviewed on the Xbox 360. Approximately 3.5 hours of play were devoted to the single-player mode, and the content was completed. There are no multiplayer modes.

Deaf & Hard of Hearing Gamers: Subtitles are available for all of the dialogue—and there's a lot. The great news is that the developers go further than most, and included different colors to signify which character is speaking. It's a great addition and really helps make the cutscenes easy to follow. In terms of the gameplay, there are no significant audio cues, so gamers with hearing issues can jump right in.

This is by far the saddest game I have ever played. If anyone wants to find maturity in videogames, this zombie game is the first place they should look. It elevates the medium and at the same time leaves the rest of gamings’ story tellers in the dust.

Hopefully, the series continues to shine with the remaining episodes. If the remaining chapters are anything like the first three, the Walking Dead videogame should be held in the same high regards as Tetris, Super Mario Bros. and other history defining games. Yes, it’s that good.