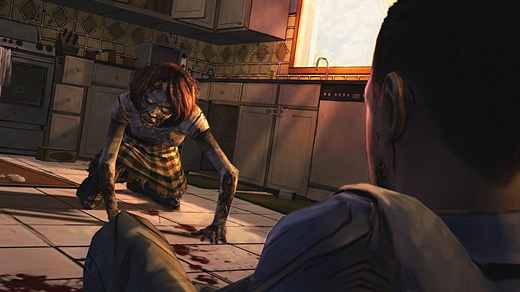 LOW Not knowing whether I was stuck or just waiting for the plot to progress.

WTF The way to break a window "silently." Also, batteries.

For a fan of comics and zombies like me, Robert Kirkman's The Walking Dead was the best thing I'd seen in years, and it's still going strong. When the series was adapted for television, the ways it could have been ruined were endless. Although some may disagree, I was happy with the result and heaved a sigh of relief. Now that it has strongly-established and successful presences in two forms of media, it's time for the franchise to take on a third—and I'm happy to say that despite my concerns, Walking Dead fans can rest easy. Telltale Games has nailed it.

functions as a companion piece to the comic, and ignores the divergent narrative found in AMC's onscreen interpretation. The game begins just as the zombie outbreak is just beginning to spread, essentially running parallel with the beginning of the book itself.

While this first episode (of five) does include some familiar characters that fans will recognize, the real stars are two brand-new faces; Lee Everett and Clementine. Lee is a convicted murderer who escapes when his transport collides with a zombie on the highway. Clementine is a small girl who's been separated from her parents, and comes to Lee's rescue when he badly needs it. They quickly agree to stay together and make their way to safety.

After beginning, I was quite pleased to see that Telltale put heavy emphasis on the human side of things, taking plenty of time to let the player get to know each character through scenes where the primary action is conversing. It's entirely appropriate since The Walking Dead's strength has always been the interactions between people under incredible stress, so this approach is totally in-line with what inspired it. However, A New Day has capitalized on the interactive nature of games by including a number of choices and dialogue options which will (reportedly) have a huge effect on later episodes.

As the story progresses, certain events force the player to make quick decisions with only seconds to weigh the options. Lightspeed nail-biting ensues. Apart from the "big" predictable things common to zombie-themed material, many smaller details seem to carry significance. Things like how I described myself, or who I admitted to knowing were recorded. With text options turned on, the game informs the player every time a decision point crops up, and I was surprised at just how many bits were being kept track of. Both words and actions count here. 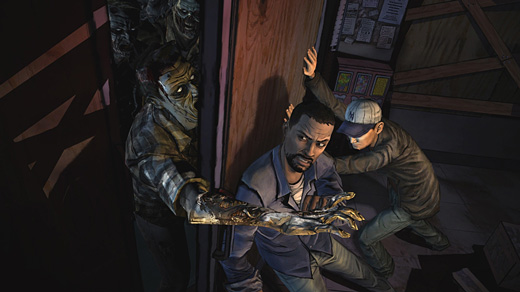 Technically speaking, the game could be categorized as a point-and-click adventure similar to other titles Telltale has turned out in the past, but I was glad to see that the inane, convoluted puzzles the genre is known for play a very small part. While I would hesitate to say that the challenges are totally logical, common sense is more useful than it usually is in this sort of game. Also, while many sections feel tightly controlled in service to the narrative, the pace of play is quite speedy from start to finish. Between these two factors, there are few points when someone might become bogged down or stuck. However, they are there.

In these instances, I was held up by being unsure whether a certain objective was optional and not wanting to miss it, or by coming up with solutions to a problem that were different than what the game wanted. These sorts of obstacles usually ruin point-and-click titles for me, but they are absolutely minimized in A New Day.  As someone who is not a fan of the "try every item in the inventory until something works" style, I found things to be quite palatable. In fact, the only criticisms I have of A New Day are quite minor.

One thing that stuck out to me was that some of the conversations don't flow quite as naturally as they could. The conversations sometimes have a "stitched together" feeling, or a wild tonal shift. For example, one character began speaking to me in a normal tone, ratcheted up to a shout, and then finished in a normal tone. The context wasn't there for it, so it seemed like it was due to the dialogue being assembled in different ways according to the player's responses. It's not a huge distraction, but it's a bit more noticeable than I'd like.

What was also noticeable were some abrupt scene changes that jarred me out of my immersion. For instance, at one point it's suggested that the characters are going to drive somewhere dangerous, and in the next scene they're already there. Skipping that transition gave the story's narrative flow an easily-avoidable hiccup, and for a property that lives and dies by its storytelling, I'd like to see a little more care taken in that respect.

Finally, I was playing on the Xbox 360 and found that the game was quite dark even after turning the brightness all the way up—something that is not a problem on the PS3 or PC. After seeing the different versions compared side-by-side, I was surprised that Telltale let the 360 code go out the door the way it is.

Those issues aside, there's no question that The Walking Dead: Episode One—A New Day

absolutely nails the spirit of the story that inspired it, and it seems poised to become another winning, must-experience branch of Kirkman's über-franchise. While zombies might be hitting the saturation point elsewhere, I can't get enough of them here—after completing this first installment, I'm ravenously hungry to get my hands on the next and see where this goes. Rating: 8.5 out of 10.


Disclosures: This game was obtained via paid download and reviewed on the Xbox 360. Approximately 2 hours of play were devoted to the single-player mode, and the content was completed. There are no multiplayer modes.

Parents: According to the ESRB, this game contains strong language, blood and gore and intense violence. Parents, there's no question that this game is absolutely intended for adults and no children should play or watch. Some of the scenes are quite intense, and there's plenty of zombie-themed gore to go around. It's great, great stuff, but only for big people. Keep the kids away.

What I like is that PSN offers all five episodes’s for $20 PLUS a really cool premium WD theme at no extra charge. You have to pre-buy the remaining four episodes’s, however. It’s somewhat like Heavy Rain, but with significantly better writing and less irritating gameplay. The graphics aren’t advanced but they are attractive, imo, with a Borderlands-ish look. I got about three hours of compelling gameplay out of the first episode–pretty good for $4 (since I bought all five for $20).