How Did You Not See That There??? 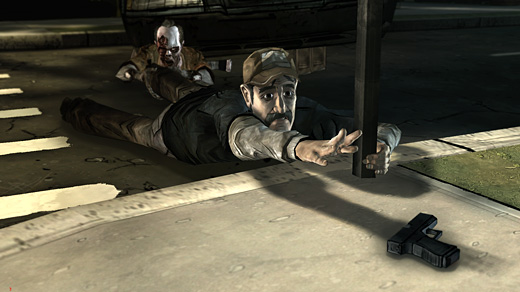 LOW Doing the wrong actions and dying because of the goofy controls.

WTF You really think you can carry that in a backpack?!?

The fourth and penultimate part of Telltale's episodic The Walking Dead series is now available for download, continuing the story of Lee, Clementine, and the rest of the survivors struggling through a brutal zombie apocalypse.

For those who might not know, this series hinges on its storytelling and characterization. As such, it is of the utmost importance that the five installments be played in order. Current events build upon previous ones, and choices from earlier episodes have an effect on those that come after. Don't consider playing Around Every Corner if you haven't already finished the first three episodes.

Now, down to business… Despite this being the fourth time I've reviewed this series, once again I'm stuck—it's next to impossible to discuss the plot without massive, story-ruining spoilers, and with a game like this one, even the smallest bit of foreknowledge can color (or even ruin) the entire experience.

Not much. The group has arrived in Savannah, Georgia, only to find that the area is just as hard-hit as the rest of the land they've journeyed across. Tensions are running high, and their plan isn't able to be carried out the way they intended. As so often happens in The Walking Dead, a bit of improvisation is required…

After the incredibly powerful sequences in the previous episode, I didn't think it would have been possible to top that level of impact, and I was mostly correct. While there are a few extremely poignant scenes in Around Every Corner, it's safe to say that this segment is more of a slow burn than the emotional trauma bomb we got last time—and honestly, after how scarred I was, pulling back on the intensity for a bit was fine with me. 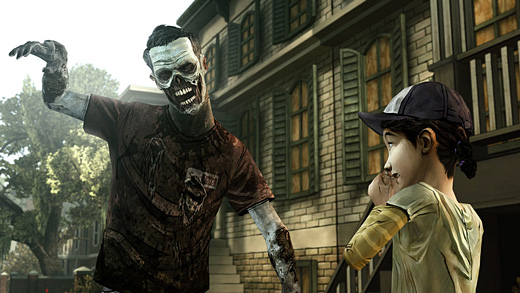 However, that's not to say that this installment was lacking in drama. As I played through, there were a few moments when I realized (after the fact) that I had been holding my breath while waiting for a particular choice to play out. I could also feel myself physically snap to attention when the action scenes sprung out at me. It was as if I couldn't get my eyes wide enough, or that my fingers wouldn't be fast enough to hit the proper cue.

Speaking of hitting cues, Around Every Corner seemed to have a higher frequency of scenes which were conflict-oriented. As such, this was the first episode where I felt extremely dissatisfied with the wonky control setup. When things are slow, it's not an issue. When a certain thing needs to be clicked on right now Godd****t, I stumbled and died more often than should have happened. If and when the next series comes out, I'd like to see something more intuitive and natural.

I was also slightly dissatisfied with one of the late-game sections that felt superfluous and on the "gamey" side. It slowed the pace of events down, and I'm guessing it could have been cut out or altered for slightly better flow. On the other hand, this was the first episode where I didn't experience any glitches or bugs, so having this piece feel nicely ironed-out was appreciated.

The final thing I should probably mention is that Around Every Corner refrains from paying off on a huge plot thread that I had been looking forward to, and as the next-to-last installment of this series, it is to be expected that it ends on a cliffhanger. While how this cliffhanger is implemented was questionable to me, it still left me ravenous to see how this desperate story concludes.  On the other hand, I'm literally afraid to see how the series will end… I've grown so attached to some of these characters that if certain things happen, I'll have to set up some counseling sessions in order to recover.

In any event, The Walking Dead has been one hell of a ride up to this point. Even the less-intense episodes are better than the vast majority of releases in 2012. If Telltale can pull off the ending without any last-minute contrivances or disappointing clichés, then I suspect that they will have created something that will be seen as a high-water mark for years to come. Rating: 8.0 out of 10.


Disclosures: This game was obtained via paid download and reviewed on the Xbox 360. Approximately 3.5 hours of play were devoted to the single-player mode, and the content was completed. There are no multiplayer modes.

Deaf & Hard of Hearing Gamers: Subtitles are available for all of the dialogue—and there's a lot. The great news is that the developers go further than most, and included different colors to signify which character is speaking. It's a great addition and really helps make the cutscenes easy to follow. In terms of the gameplay, there are no significant audio cues, so gamers with hearing issues can jump right in.

Man, the more you talk about this game Brad the more I want to try it, but I’m a big ol softie. I’d burst into tears having to make some of the decisions that you are hinting at. It sounds great though. Maybe i’ll break down and buy it as a bundle later on.