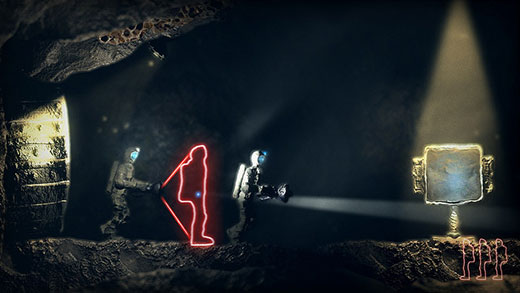 LOW The puzzles feel noticeably disconnected from the world.

WTF is up with all of these frigging red and blue lights?

It's hard to dislike The Swapper.

It's from a small developer, it has a unique visual style that feels alien and unsettling, it's got an interesting sci-fi premise that asks questions about existence, and bravely, it features no combat at all. Frankly, it seems tailor-made for someone like me, but the truth of it is that there's a deep disconnect in this title that I just couldn't get past.

The game begins in a lonely space station where some sort of disaster or terrible event has happened. Soon after, the player's stranded astronaut gains the ability to create clones of him or herself, and then can transfer their consciousness between the clones.

The Swapper's introductory sections are great and things start off smoothly, but the game soon introduces complications—primarily red and blue lights. A clone body can be sent through a red light, but the consciousness can't travel through it. Blue lights are the opposite; they block bodies from being created, but the consciousness can pass. It's not long before nearly every puzzle includes these lights (and overlapping lights create purple, which is a total barrier) so not only does the player need to figure out how to manipulate the clones, but also how to get around the areas where the lights are shining.

Despite how much I wanted to like The Swapper, its idiosyncratic puzzles soon grew too obtuse and fidgety for my liking. Sometimes the player must put a body in exactly the right place in order for a solution to work, and other times things get meta about how to game the system. I got through a fair chunk of its challenges on my own, but I started hitting my head against a wall when they got more complicated about halfway through, and the game promptly went from being eerie and intriguing to annoying and frustrating.

Despite my inability to quickly grok the later puzzles, I might have kept going if they didn't feel so completely disconnected from the story. At no point does the ship ever feel like a real ship—each room is a self-contained puzzle, and they rarely resemble any sort of logical area. Worse, the object of doing them is to gather golden balls which act as keys for doors. Apart from some text logs and brief interactions with alien rocks, the player spends the entire playtime collecting ball after ball in room after room because… that's the only thing the developer could figure to do with the swapping mechanic?

I respect what Facepalm was going for with regard to the story and I badly wanted to immerse myself in its existential tale of body-switching, but the gameplay and the world are two separate things that don't sensibly mesh. If the puzzles had been better integrated into the environment, or if the environment asked the player to use swapping for more than these unconvincing puzzles, the experience as a whole would be much stronger. I support sci-fi that does more than ask people to shoot aliens with futuristic guns, but there's just not enough coherence in The Swapper to put up with the split between the intriguing premise and the contrivances that surround it. Rating: 6.5 out of 10


Disclosures: This game was obtained via publisher and reviewed on the PS4. Approximately 3 hours of play were devoted to the single-player mode, and the game was not completed. There are no multiplayer modes.

Parents: This game was not rated by the ESRB at the time of review. In my opinion, I'd rate it a T due to the mature writing and somber tone. There were no instances of questionable language or sexual content. The only violence is when clones fall to their death with a crunching sound.

Deaf & Hard of Hearing: All dialogue is subtitled, and no audio cues are necessary for successful play.

I’m in agreement with you on The Swapper. The atmosphere it builds is great, and it has several moments that are very thought provoking. But, as you said, the station doesn’t seem like an organic construct, just an arrangement of isolated rooms with puzzles to solve. Plus, some of them can be very frustrating, such as when you fall down a pit and need to keep creating clones as you fall to transfer your consciousness to. I think the developers drew heavily from Metroid and Portal, but didn’t focus on how to naturally mesh the concepts together. Still, it is… Read more »

I think your complaints and wishes regarding the gameplay orientation are completely valid – even on a second playthrough, there is one room that I simply could not have cleared without looking up the solution – but it’s too bad you didn’t get a chance to experience the conclusion to the story. There is a strong moment of choice near the end and the manner in which the final sequence is orchestrated is legitimately great, I believe. A masterful wrap-up of the thematic concerns, completely overshadowing what I also consider a slight excess of tedium and dissonance. Outside of that,… Read more »