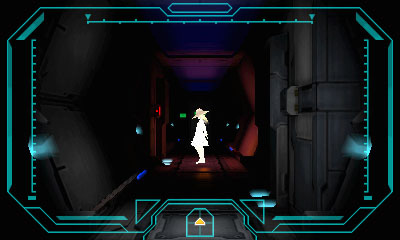 HIGH A spooky sci-fi tone and clever use of robots.

LOW Overlooking a crucial key and getting stuuuuuuck.

WTF That's what the oil was for? Really?

Full disclosure: I'm terrible at point-and-click games. I enjoy them, but playing them is always an exercise in frustration. I'm even bad at those that aren't exactly in the genre, but come pretty close.

My problem is that the "logic" needed to solve an arch developer's idiosyncratic puzzles doesn't often make sense to my brain. I'm not usually able to see connections between cat hair and mustaches, or why I should go through twenty-seven abstract steps to do something that would take ten seconds in real life. Because of this, getting stuck and hitting GameFAQs is my usual M.O.

Even though I rarely feel satisfied from this type of personal failure, I still check point-and-clicks out whenever the opportunity arises, and it's a rare treat when I find one whose puzzles don't take insane detours from common sense. As such, I was pleasantly surprised with sci-fi themed The Starship Damrey. Despite my initial hesitance I decided to take the plunge anyway, and didn't regret it.

The premise of the game is an interesting one—the player's character wakes up inside a "sleep capsule" aboard a starship, suffering from amnesia and unable to get the hatch open. Trapped inside this small space (approximately the size of a coffin) their only means of interaction with the outside world is to log on to the ship's computer network and manipulate a robot in remote-control fashion.

For the majority of gameplay, the lower screen of the 3DS shows the character's legs underneath a blanket, and this constant reminder of the physical predicament they're in was a nice touch. The top screen shows what the robot can see from a first-person perspective, and its camera can be used to scan the rooms and hallways of the ship for information and items. Both of these elements together do a great job of not only establishing how and why the game works the way it does, but also in striking a lonely, isolated mood.

Since the core of Damrey is in exploring the ship and finding out what's going on, I won't spoil the story here. However, I will say that despite a few doubts halfway through, I was glad to find that the writers brought it together nicely at the end, apart from a clumsy post-credits info-dump. Even so, I could only respect the smartly-restrained choices they made with regard to the limited scope of the project overall.

If there are any criticisms to be made of The Starship Damrey, they're relatively minor ones.

The biggest is that there's no guidance or hint system in place for players who get stuck. Not everyone will have an issue with this since the adventure is so small and straightforward, but there are at least one or two points where a crucial item might be overlooked, bringing a halt to forward progress.

The other thing to bring up is a nitpick, but there's a side-quest asking the player to exterminate twenty "space leeches" hidden throughout the ship. These leeches make a loud sound when the player approaches, so it's easy to track most of them down. However, there are two leeches which make no sound at all, so it's easy to pass them up. Combing the ship after collecting 19/20 was a bit of a drag, and the audio inconsistency was not appreciated.

While the launch price of $8 feels a dollar or two too high, I definitely enjoyed the game (when I wasn't stuck) and felt satisfied when it was over. I would recommend it to players interested in the genre, and especially to those who prefer puzzles with a foothold in actual logic. Players interested in elegant, small-scale design might also learn a thing or two from this tasteful interstellar jaunt, as well. Rating: 7.0 out of 10.


Disclosures: This game was obtained via paid download and reviewed on the 3DS. Approximately three hours of play were devoted to the single-player mode, and the game was completed. There are no multiplayer modes.

Parents: According to the ESRB, this game contains fantasy violence and suggestive themes. Honestly, I think these warnings are a little off-base. There is nothing graphic, it's impossible for the player's robot to be damaged, and there is never any depiction of action taken against a human being. The remote control robot pokes around here and there, and it's all very sedate. In terms of the suggestive themes… the only thing that even remotely comes to mind is that there are a few files that can be read, alluding to some interpersonal relationships between the crew. It's just text, and very vague.

Deaf & Hard of Hearing: While I was initially going to say that the inability to hear the space leeches was a problem, I actually think the opposite now—by depending on the audio cues to find them, I missed one that was silent. If I had been depending on eyesight alone, I certainly would have found it. Other than the issue with the leeches, the game is totally accessible without any audio cues necessary for completion and all information is relayed via text.