I'm quite happy to say that my oldest son, age 11, will be flying in this weekend to spend Christmas with us.

Since he lives with his mother for most of the year (and they live pretty far away) I usually only get to see him during the major school breaks. It's a very long time between the end of summer and the Christmas holiday, so it feels like an eternity since he's been here.

We plan on chopping down a Christmas tree and catching a showing of The Hobbit, but other than that, I think we are going to lay low and just hang out as a family… we may play a few video games as well. 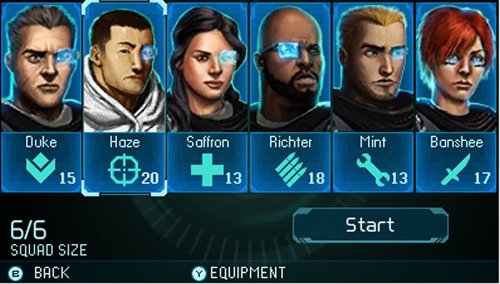 I can't remember if I mentioned it or not, but I picked up a 3DS XL during one of the big holiday sales, so I've been spending a lot of time getting to know the system. Impressions are pretty positive so far, apart from the strange situation of not being able to log on to free Wi-Fi when I'm out and about because the system doesn't seem able to connect in order to bring up the screen where you click "I agree" in order to actually use the free Wi-Fi. It seems like there must be a simple solution to this problem, but if there is, I've been unable to find it.

In terms of what I've actually been playing on it, it's been mostly Tom Clancy's Ghost Recon Shadow Wars. It happened that Chi Kong Lui recommended it to me during one of our podcasts, and I picked it up for $10 a couple of months ago, before I had even bought the system.

It ended up being the best $10 I've spent in a while—I'm not a fan of Clancy-type stuff in general, but this is a turn-based strategy game partially developed by one of the original XCOM creators, so it's totally solid and a hell of a lot of fun. The graphics are pretty ugly, but once I got over that, it's been a fantastic game to play on the go. My full review is coming soon, but if you have a 3DS and you're a fan of turn-based strategy, buying this one is a no-brainer.

Speaking of reviews, I just turned in my text for Black Knight Sword on PSN. (It's also on 360.) Although I'm actually a fan of the crazy visual style and offbeat nature of the game, actually playing it is a disappointing experience and it shows the same sort of unsophisticated, unpolished gameplay design that's common to Japanese developer Suda51's titles.

Look for the writeup soon, but the short version is that it's not really worth the purchase price unless all you care about is Suda51's offbeat nature or some bizarre graphical choices.

My friends over at Undead Labs sent over this link to a developer writeup detailing some of the finer points in their zombie survival title, State of Decay. I haven't had a chance to play it in a while, but it was already looking pretty great back then. This is easily one of my most-anticipated titles for 2013, so click on over and take a look at some of the stuff they're working on.

One of my other most-anticipated titles for next year is Monster Hunter 3 Ultimate, on Wii U. (And yes, I am going to buy a Wii U just for this game…)

Here's a video link to one of the new monsters called a Lagombi. I don't know if that's the name it'll have in the North American version, but whatever it ends up being called, it's a big freaking rabbit. It definitely looks like one of the mid-or low-range monsters, but the person in the video is apparently a terrible player since they're getting hit with every attack.

Anyway, I can't wait to see what kind of armor can be made from this beast… whatever the end result, I'm sure it's going to be cute and fluffy.

The good people of nerd rock band @KirbyKrackle have released a version of the disgusting Christmas date-rape song, Baby, It's Cold Outside. Fortunately, they have de-creepified it by switching the male and female vocals, and by rewriting the lyrics in order to give it a Han/Leia Star Wars theme. I generally hate this song whenever it comes on the radio, but this new version… I think I likes it.