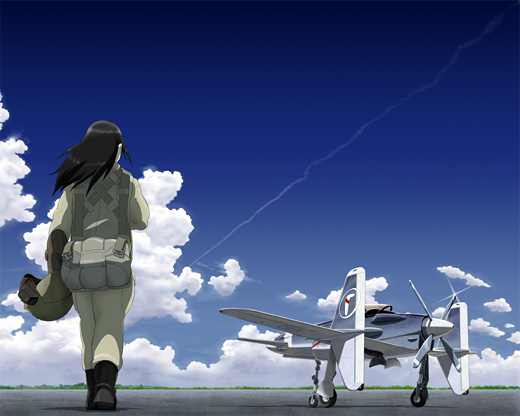 HIGH The Tactical Maneuver Commands are a literal game-changer.

LOW Being forced to use the Senryu for a mission.

What are the chances that an unheralded flight combat game on the technically-challenged Wii (based on an anime series I had never even heard of, no less) would end up being the most interesting thing on wings I've seen in some time? If you had asked me before The Sky Crawlers: Innocent Aces, I would've said something fitting that description would be mission impossible. However, Namco Bandai's new aerial effort has a couple of tricks up its sleeve that save the day—a respected development team with tons of experience, an extremely entertaining hook to gameplay, and most important of all, the ability to use a controller other than the Wiimote.

Coming from the team responsible for the venerable Ace Combat series, Sky Crawlers puts players in the role of a mercenary pilot employed by a large corporation fighting a war for resources. The setup might sound familiar, but the story takes a detour with the addition of "kildren"—artificial people bred for combat.

As I said above, I have absolutely no familiarity with the source material this game is based on, but I appreciated the amount of effort put into the plot. The large number of animated cut-scenes and plenty of mid-mission chatter helped paint my fellow pilots with personality, and a twist at the end certainly upped the dramatic factor. This aspect of the game was better than I expected, really. Rather than skipping through it, I was interested enough to take the time to listen to all of the story interludes and briefings. That said, story in a game like this is of secondary importance… it's all about the dog-fighting. Luckily, Sky Crawlers delivers its own special brand. 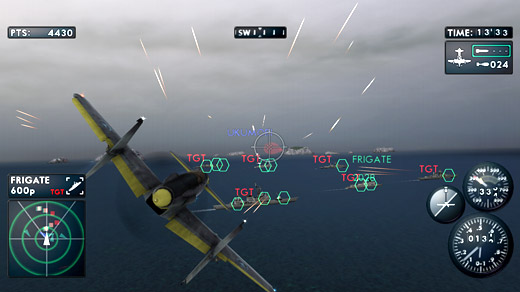 Before actually describing the gameplay, let me first say that anyone intending to have even a remotely enjoyable experience with Sky Crawlers needs to completely ignore the Wiimote/Nunchuk configuration and instead use either a Classic or GameCube controller. Sky Crawlers is a perfect example of trying to shoehorn motion controls in where they don't belong, and the situation is only exacerbated by the underperforming, horribly imprecise Wiimote. Do yourself a favor and don't even bother… the only result of trying to get by on the motion controls is going to be anger and frustration. Don't do it.

Once a proper control pad is in use, Sky Crawlers doesn't deviate much from the expected formula in general. There's plenty of air-to-air, some ground-pounding, a canyon run, the usual hangar full of customizable aircraft, and so on. It all gets the job done quite respectably given the limitations of the Wii, but what sold the experience for me were the Tactical Maneuver Commands.

When an enemy target is selected, a yellow circle appears around it to indicate an area of opportunity. If the player maneuvers their aircraft within the circle and maintains this close proximity for a few seconds, hitting a button will activate a short cut-scene featuring totally insane acrobatics that thumb their nose at the laws of physics. More than just a show, these Maneuvers instantly close distance and position the player directly behind the opposition—the prime place to be for gunning them down with extreme prejudice. Taking advantage of the system brings down bogeys with rat-a-tat-tat cadence, and made me feel like the deadliest thing in the sky.

Although some might argue this mechanic takes the "skill" out of flight, I'd argue that there's not much entertainment value in flying endless circles through open sky while trying to get a missile lock on a red dot zigzagging across the screen. I've had more than my fill of fire-and-forget over the years, and although a system like the Tactical Maneuvers here might be totally unrealistic and a huge advantage, it also speeds up the pace of combat with an action-packed, cinematic flair. The Maneuvers were a huge plus in the game's favor, and I'd love to see developers take more license with the genre the way that Namco Bandai has here.

For Wii owners jonesing for something besides the usual batches of brightly-colored shovelware and tired flagship franchises, The Sky Crawlers: Innocent Aces fresh take on dog-fighting along with a healthy dose of anime-inspired storytelling is just what the doctor ordered. Rating: 7.5 out of 10.

Disclosures: This game was obtained via publisher and reviewed on the Wii. Approximately six hours of play were devoted to the single-player mode, and the game was completed. There are no multiplayer modes or basset hounds.

Parents: According to the ESRB, this game contains mild language and violence. The only violence on display is between aircraft and other military hardware. If you've got an issue with seeing fighter planes blow up in a totally non-graphic way, then be warned. Otherwise, there's not much to be cautious of here. There is no sexual content, and the ‘mild language' is so mild that I didn't even notice it at all.

Deaf & Hard of Hearing: You will have only minor issues. All dialogue is subtitled, and there are no significant audio cues during gameplay except in one mission when teammates are calling out for help. Their cries for assistance are still subtitled, but it's sometimes easy to miss them in the heat of battle. Still, that's a very isolated and minor point. Overall, no problems with accessibility here.

Defiantly looks like a game that I need to check out.