Sony Bend has done it again. The first handheld Syphon Filter was a powerhouse, and its sequel, Logan's Shadow is no different. Series star Gabe Logan may not have the personality of Solid Snake or the instant recognition of Sam Fisher, but he's got them both beat by a country mile when it comes to portable action. Without a doubt, this is the small-scale action franchise to beat.

By far, Logan's Shadow's most valuable asset is that it moves like lightning and doesn't stop for a minute. The pace is set high, maintaining the same tense energy from level one to the ending credits. Plenty of hints and cues make sure that players are never left wondering what to do, and the cut-scenes and radio chatter do a great job of keeping the focus on the mission. No matter what I was doing, I always felt like I was making things happen and pointed in the right direction.

Syphon Filter's mission variety is just as perfect as the pace. While out in the field, Gabe tackles a surprisingly wide range of objectives and situations—of course there's plenty of combat (the kind where finding cover is essential) but besides straight-up shooting, several legs of the op give our hero a partner, and it's to the developers' credit that none of these escort missions drag the game down a bit. One section has Gabe taking cover behind a tank in motion while he calls out shots for the driver to pummel with the cannon. Good stuff, indeed. 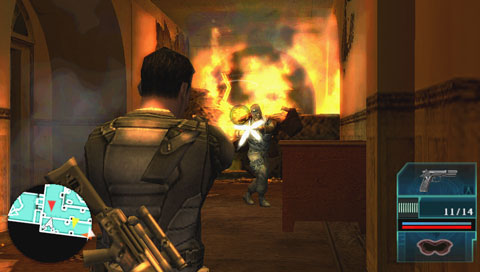 There are plenty of other juicy segments keeping things fresh, and the new addition, underwater action, works beautifully. While most aquatic missions are something for players to groan about and trudge through, Sony Bend actually had me looking forward to them. One tight sequence set in a capsized tanker with the entire vessel on the ocean floor was fantastic; it's to their credit and a display of their canny design powers that it avoided every potential pitfall that the average developer would have most likely fallen into.

Last time around, I said that Syphon Filter: Dark Mirror was the best Syphon Filter game ever, but Logan's Shadow edges it out. Everything about the game has "top-quality" written all over it. The AI provides plenty of interesting moments, the save points are frequent, the story is accessible, the voice work and graphics are in the top tier on the PSP, the music is surprisingly haunting, and the entirety has been polished and delivered by people who know what they're doing. They don't come better. Rating: 9 out of 10