M.A.C.H. is one of those unfortunate games that sport impressive production values, smart design and a good difficulty curve without ever getting any traction at retail. Heck, I don't even know another PSP owner who's considered playing it, let alone brought it home from a shop. It's too bad really, because past the generic-looking box art and incredibly dull title, there's a pretty sweet experience to be had.

I'm not one for racing games in general, but M.A.C.H. had enough of a hook to draw me in; instead of pimpy imports, high-end sportcars or NASCAR snoreboxes, all racing takes place in the skies with fantasy aircraft capable of incredible speed and agility.

The mechanical design is quite good, with most of the jets striking a good balance between modern warbirds and sci-fi technology. Even better, after winning a few races, the cash earnings can be used to modify the cosmetics and performance of the vehicles. For players who don't care about clinging closely to reality, some of the upgrades are impressively crazy. By the end of the game, my standard-looking fleet became a flock of multi-turbine, reverse-wing predators. 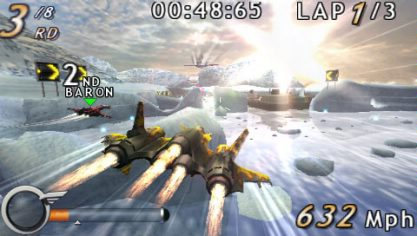 One thing in particular I'd like to praise is M.A.C.H.'s implementation of weapons. Most games that blend attacking and racing tend to err in favor of offense. I don't have much patience for these titles since the AI usually skews towards "every racer vs. the player," and consistently blowing up into a fireball a few seconds from the finish line drives me absolutely crazy. In M.A.C.H., strategic use of barrel rolls can negate any attack in order to ensure the player retains some sense of control. The maneuver can't be spammed since it uses a portion of the plane's power gauge, so the proper checks and balances are in place. It's a smart system, and one I wish other developers would copy.

Although there are only five tracks, the repetition is broken up by dogfighting events and a few other modes that help spice up the formula. I would have liked to have seen more content overall; more locations, more upgrades, more events, but what's here is quite satisfying and an above-average first effort at getting a new franchise off the ground. It looks great, it feels great, and it's a perfect fit for a handheld system. It's too bad that the odds of M.A.C.H. getting a sequel are slim to none… I guess this is one example when flying under the radar isn't a good thing. Rating: 8 out of 10.