As a lifelong Transformers fan, I’m pleased to say is that 2007 is most definitely one of the best years the mechanical warriors from planet Cybertron have had in a while. The new toys are interesting and high-quality, Michael Bay’s feature film surpassed expectations, and there are now three different games to choose from for people who want something electronically interactive.

The subject of this review, Transformers: Autobots, is an intriguing title in that it avoids being the typical one-off licensed game that it very easily could have been. Unlike its console counterpart, Autobots (and its companion piece Decepticons) decided to split things up evenly and create two distinct titles, each focusing on its own faction. Going further, Vicarious Visions set the bar ambitiously high for themselves by attempting to create an open-world formula rather than something more scaled-down for the DS. Although they get my respect for the effort, I think perhaps they bit off more than they could chew.

Breaking away from the storyline of the film, Autobots removes all of the human characters and instead stars a brand-new robot. This robot is named by the player and introduced as a new member of the team. The game then touches on the high points of the movie while offering a number of simple sidequests that can be done for experience.

The thing that immediately grabbed my attention about Autobots is that this new robot is customizable—players can scan passing vehicles and choose to transform into a number of them. The majority are cars and trucks, but helicopters become available and a jet can be unlocked. (Personally, the school bus was my favorite.) Picking and choosing a new vehicle mode at will was absurdly entertaining, and I was occupied for quite a while scanning as many vehicles as I could in the search for something faster and shinier. My inner geek was happy. 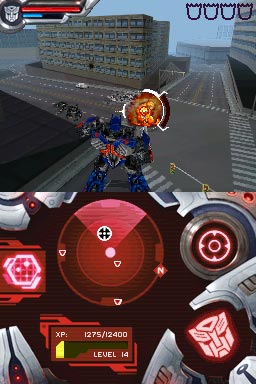 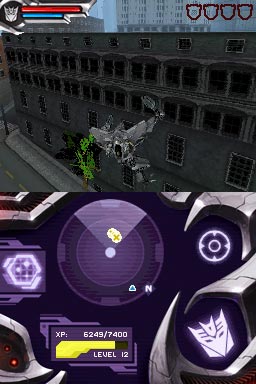 Vicarious Visions won me over with that little innovation, but Autobots has some serious issues just about everywhere else. In a nutshell, it’s pretty clear that the DS doesn’t have enough horses under the hood to do this game justice.

Although I’m not one to often comment on graphics, the robots look like blocky, smeared messes and the environments are bare and sparse. The combat (both ranged and melee) is broken, and the targeting system is a nightmare. I seriously felt as though the DS was going to wheeze its last breath and crumble with the strain of trying to run the Grand Theft Robot experience this game aims to be.

Being so rough technically, Autobots can be a frustrating experience. There’s no way to block or defend enemy fire, and sometimes defeating bosses seems like it takes luck more than anything else. For example, the final battle with Megatron is a tough one that’s made tougher by the fact that the game will randomly end the fight if the player gets too far away. This in itself wouldn’t be so bad except for the fact that it’s wildly inconsistent—sometimes the match is over after being knocked five feet back from explosion, while at other times Megatron could be several blocks away and out of sight and the fight would continue.

The final battle’s arbitrary nature is just one example, but the bottom line is that Transformers: Autobots has a few good ideas held back by terrible production values and an execution that’s so sketchily erratic that only a dedicated Transfan would be willing to put up with it for more than a few levels. Hopefully the 360 version will do these robots justice. Rating: 5 out of 10.