Good Star Wars games are few and far between. Some may disagree, but as someone who’s a fan (but not obsessively so), I don’t find myself blinded by loyalty or love of the films. Still, I think it’s a great universe to work with, and I like it if the games building on it succeed. As such, Star Wars: Lethal Alliance is an effort that gets a lot right in terms of the license, but still falls short of what makes a game good overall.

For me, the strongest aspect of Lethal Alliance was the characters. Feeling like natural fits alongside familiar faces like Princess Leia and the previously-established-in-games Kyle Katarn, twi’lek heroine Rianna (one of those aliens with long tentacles on their heads as seen dancing for Jabba in Return of the Jedi) and her trusty droid Zeeo are a great pair.

What made these two memorable was that they were a kind of duo that fans haven’t really seen a lot of in Lucas’ universe; each one efficient and independent, yet both functioning as a symbiotic whole in tandem. Unlike the other droids seen in the films, Zeeo has powerful combat attacks and is often used as an acrobatic aid to help Rianna scale walls or fly through the air in a handful of racing levels. Rianna’s no slouch herself, able to execute stealth kills and brawl with the best of them. 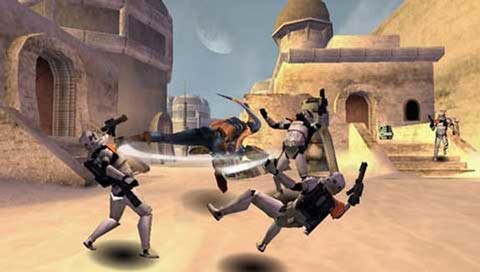 While I think in the developers did a great job of creating this pair, they failed to come up with an adventure of similar quality, turning what could have been an outstanding title into another mediocre effort.

Basically, there are about five or six different types of levels that repeat for the entire length of the game, and although each one is decent enough (except for the stealth missions never seeming to function as planned), they’re not enjoyable or substantial enough to support a whole adventure. As such, Lethal Alliance starts to feel stale and repetitive long before the credits roll. Level 10 feels like a palette-swap of level five, the racing on Mustafar seems like the same racing on the forest planet, and there are entirely too many "take out all enemies with the gun turret" sections for my taste.

It satisfies in small doses, but there’s no denying that neither the engaging characters nor the Star Wars license are enough to conceal the fact that Star Wars: Lethal Alliance is thin and underdeveloped. I can’t really recommend it to anyone except for fans of the license, but I will say that I hope these characters are used again in the future—I would definitely like to see more of them. Rating: 5 out of 10

Disclaimer: This review is based on the Sony PSP version of the game.