An attractive-looking minimalist presentation and a craving for some good puzzle action drew me to Hudson’s Honeycomb Beat, and its budget price sealed the deal. Although it started strong and seemed to hold a lot of promise, I’m not quite sure I got my $20 worth—this unorthodox puzzler fizzled out fast.

The central gameplay mechanic to Honeycomb Beat hinges on flipping the hexagonal ‘comb shapes that make up every playfield. With a touch of the DS’s stylus, any tile touched flips from black to white, or white to black—and causes every tile around its border to flip as well. It’s a simple idea, yet one that offers a good balance of complexity and elegance.

The first mode of play (out of two) consists of 200 puzzles put together by the developers. These puzzles all have preset solutions, the ultimate goal to turn every tile in any given puzzle to its white side. Things start out pleasantly enough with small configurations of hexagons, just a few taps solving most of them. As they get larger they get harder, but there’s an intrinsic symmetry to their layout: a sort of geometrical beauty that acts as the key to unlocking more imposing shapes. The problems for me started cropping up when the developers introduced tiles with special properties. (Some flipped themselves while leaving their neighbors unflipped, others flip only diagonal neighbors, and so forth.) 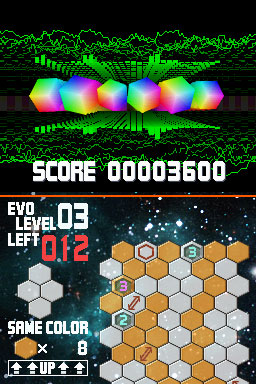 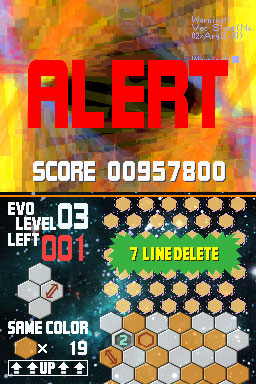 These special tiles ruined the "fairness" and quality of the puzzles for me, and made the gameplay unpleasantly difficult. I thought things were entertaining enough with the basic formula in the early stages, but in the mental challenge of unraveling the exact order in which to touch each tile on top of trying to figure out when to use the "gimmick" tiles became a tediously defeating brick wall near the halfway point—just one small error in the sequence and it’s time to start over.

The second mode was less entertaining than the first. In this "evolution" mode, a wall of honeycombs rises from the bottom to the top. It’s the player’s job to flip the tiles around so that horizontal rows are all the same color. Once this is done, the row disappears and clears more space for the coming tiles. It sounds simple, but I found it to be phenomenally hard. The first few lines can usually be pulled off right away, but the tiles rose quicker than I could ever keep up with. I didn’t get very far due to its unforgiving nature, and didn’t think this mode was particularly well-made.

Although the price was right and I admired its aesthetic, it was easier and more enjoyable to simply put Honeycomb Beat aside rather than grit my teeth and hang on. I never felt very rewarded or challenged; I was either struggling once past the beginning stages or just getting crushed by the unfriendly nature of play—not exactly the kind of thing I like to bring with me when I need to get in a quick 15 minutes of game on the go. Rating: 4.5 out of 10