So it took a few hours off of Twitter the other night, and when I got back, my feed was absolutely exploding with talk about the announcement of the NGP—Sony's next-generation successor to the PSP. I'm going to reserve most of my thoughts for later.

However, I will say that I could not be happier that someone at Sony R&D finally realized the catastrophic error of their ways and added a second stick to the hardware. I mean seriously, how did the PSP ever get out the door with just one in the first place? Additionally, although I know that neither franchise is very popular here in the states, the announcement of Monster Hunter Portable 3rd and a new Yakuza title both got my attention immediately. Between the two of those titles, that's probably something like 300 hours of play right there…

Anyway, I'm rambling on. No further comment at the moment, but you can click on over to the good people at GameFocus to get a quick run-down of the NGP's tech specs. 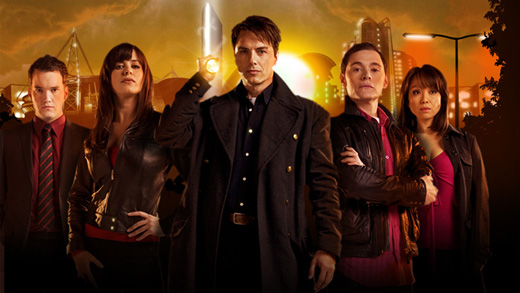 The wife and I recently finished the first two seasons of Torchwood, and without any spoilers, I will say that the "series finale" was a little emotional… I wish I could go into it further, but I would hate to ruin anything for those of you who haven't watched the show yet.

Anyway, it's very true that the writing was often hit-or-miss and could be quite inconsistent in terms of characterization at times, but we still really enjoyed the show regardless. In fact, it's a little sad to know that there isn't much left for us to actually watch. Well, at least not right now, anyway.

(On a similar note, we're also getting perilously low on unwatched Doctor Who episodes as well… it may be time to start watching some of the old stuff!!)

At the moment, the only thing left available to us is the Children of Earth five-part miniseries and the thing that sucks is that it's really, really good. In fact, although we haven't completed all five episodes yet, what we've seen so far has definitely been some of the best Torchwood overall. Tight scripting, plenty of action, and lots of twists and turns—this is great TV.

It's really a shame that the earlier installments weren't up to this same level, frankly. From the beginning, I felt as though the series had not lived up to its full potential, but Children of Earth is going a long way towards making up for that. Hopefully the new crop of episodes currently being filmed as a co-production of the BBC and Starz will be of a similar quality—after all, if there's one thing the world needs, it's more quality time with Jack Harkness.

PSP2 looks good a shame about the battery, I hope its under 300$ but I doubt it.