A blast from the… past? 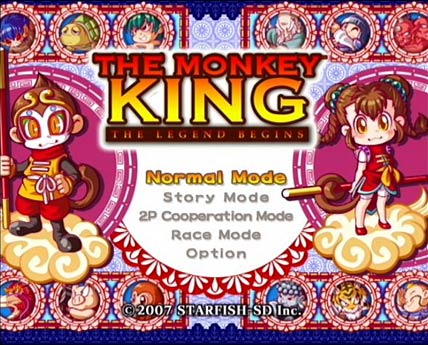 I may not be the hardest of the hardcore, but I definitely like shooters—and by shooters, I don't mean anything in first-person involving Nazis, I mean the classic definition where players pilot a spacecraft of some sort and fly from left to right or from bottom to top while destroying everything that moves. Gamers don't get very many of these anymore, so whenever I come across a new one, it's always a treat.

After doing a little research on The Monkey King: the Legend Begins I couldn't definitively tell one way or the other whether this was a port of an arcade game, or an all-new effort. I suspect the former, but the jury is still out. Either way, it's a cute, fluffy, and brief diversion for people like me who can remember the days when arcades (what were those again?) were filled wall-to-wall with games like this.

At Monkey King's beginning, the player can choose from either a male or female character (there's also 2p co-op) and hit the skies riding on a flying cloud. Nothing here is especially complex or confusing; it's all about dodging enemy shots and cruising through each stage. The only thing a player needs to know is that everything on screen that's not their avatar should be blasted, and that power-ups are a shooter-gamer's friend. 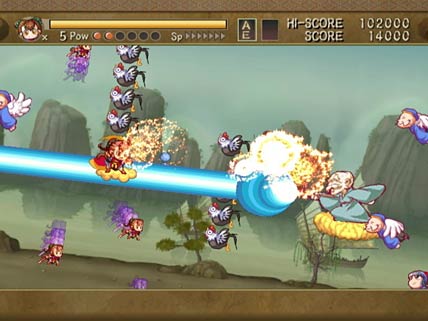 Interestingly, there is one new mechanic that I've never seen in a shooter before. By tilting the Wiimote to the left, the screen's auto-scrolling movement slows. By tilting it to the right, it speeds up. It's a pretty minor feature and I finished the first three stages before remembering that it was even there, but it's a new spin on an old formula, so that's worth something, at least.

Although the mechanics are nothing revolutionary, I will say that I appreciated the graphics for their old-school flavor and intense pan-Asian iconography. Just about every element from the myths of the far East makes an appearance at one point or another, like kappas, multi-tailed foxes, dragons, monks, phoenixes, peaches, cherry blossoms, kirin, Mongolian warlords, flaming bowls of curry, and of course the main character himself, a variation upon the popular Monkey King character who has infiltrated virtually every form of media known to man. Spotting and naming each thing is almost a mini-game unto itself.

A quick check online shows a brand-new copy of the game can be had for the discounted price of $15.00, and to me that sounds just about right since players can expect between 60 to 90 minutes of playtime before completion—par for the course in the shooter genre. Monkey King: the Legend Begins may not be the deepest or most up-to-date thing on shelves today, but it's got charm and will likely warm the hearts of players like me who wouldn't mind seeing new shooters a little more often. Rating: 5.0 out of 10

Disclosures: This game was obtained via a rental and reviewed on the Wii. Approximately 1.5 hours of play was devoted to the single-player mode (completed 1 time).

Parents: You have no need to be concerned. The graphics are bright and very cartoony, and the only violence is the main character shooting glowing balls of energy at flying pigs, winged monks, or Mongolian warlords who all disappear with a small puff. Totally harmless stuff here.

Deaf & Hard of Hearing: All dialogue in the game (and there's only a little bit in the Story mode) is subtitled, and you definitely don't need ears to play a shooter. Fast reflexes and good eyesight, maybe, but not ears.

As far as I know, it’s only available for the Wii. Sorry!

can you tell me were to download that game up there. i wanna try it. can you download it on a computer?