A heartwarming tale of a boy and his… sentient, mobile mouth 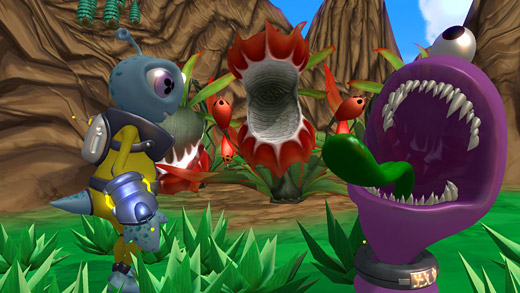 HIGH looks and feels just like a standard retail release

LOW it's over way too soon

Winner of the PAX 10's Audience Choice Award and an Independent Games Festival finalist, Twisted Pixel's The Maw has finally arrived on the Xbox 360's Live Arcade download service, and it was certainly worth the wait.

Best described as a 3D Action/Adventure, The Maw begins as a ship piloted by intergalactic animal collectors crash-lands on a nearby planet. Among the escapees are the player's character (an adorably cute alien boy) and the titular Maw, which consists of a giant mouth full of sharp teeth, one googly eyeball, and little else. The two become fast friends and make their way through a series of areas as they fend off their former captors.

The first thing that will strike anyone about The Maw is the absurdly polished level of production. Although the quality of recent download titles has been steadily improving, Twisted Pixel's work can be easily counted among the best. The visual design is very warm, appealing and cohesive throughout the entire game, strongly reminiscent of something that might be turned out by Disney, or Pixar Studios proper. 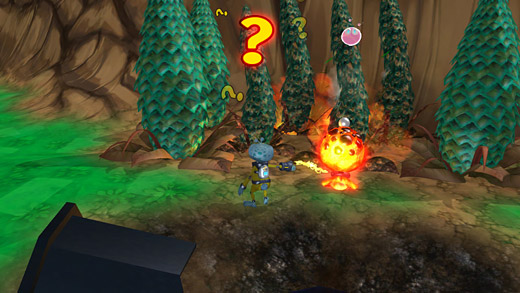 Another high point for the game are its level designs. Each area feels small and controlled, but in the best possible sense. The game's big hook is that the Maw constantly grows larger and often adopts the physical characteristics and abilities of creatures that he eats, and the level designs reinforce the straightforward, easy-to-grasp challenges by giving the player very little opportunity to become lost or confused. Experimentation is encouraged on a limited scale with players being given enough rope to swing, but never enough to hang themselves.

Experienced gamers may find that The Maw doesn't present much of a challenge (especially since it's not possible to "die") but I daresay that it's not supposed to. I think it's clear from the genre, the visual design, and the overall tone of the game that Twisted Pixel was going for something approachably open and welcoming, and I would say that they have absolutely succeeded.

It's quite refreshing to play something that feels like it wants you to play it. Some players may be distressed by the absence of chainsaws, distinct lack of collecting life packs, and no need to dodge sniper fire, but simply enjoying the bright, colorful world and growing fond of the lovable, cuddly (and only slightly frightening) purple eating machine known as the Maw is a special kind of reward unto itself. Rating: 8.0 out of 10.

Disclosures: This game was obtained via publisher and reviewed on the Xbox 360. Approximately 4 hours of play were devoted to the single-player mode, and the game was completed. There are no multiplayer modes.

Parents: According to the ESRB this game is rated E-10+, but honestly, it would be quite appropriate for players of any age. Although aliens in the game do wield guns, they don't really do any damage and there's no graphic violence whatsoever, unless you count the Maw eating alien wildlife—and even that is completely bloodless. There is no sexual content and no questionable language (since there's no dialogue). I plan on letting my seven year-old tackle this the next time he is up for some game, and I would definitely recommend this as a kid-friendly title.

Deaf & Hard of Hearing Gamers: You will have no problems whatsoever. There is no dialogue at all in the game, and there are no auditory cues necessary for gameplay. Everything is extremely visual, and since players can't really "die" there's never a situation when a hearing impaired gamer will be at a disadvantage. It's totally accessible.

Thanks for the reply. I’m always on the lookout for games I can play with my nephew, or ones he might enjoy. I’ll keep this one in mind.

Thanks for the comments. I didn’t want to go on about the game’s length because I didn’t really see it as a bad thing, and I mentioned it in two separate places (as the ‘low’ and again in the disclaimer) so I figured that was enough of a mention. As for the game mechanics, I was trying to avoid one of those ‘laundry-list’ type of reviews where the writer goes through every feature, but I’m glad to elaborate… the game is more than Feeding Frenzy 3D in that each world has a specific set of puzzles to solve, usually related… Read more »

Short review for a short game. I would have liked to see more of a write up on the game length, which was listed as a low, and also the game mechanic. I played the demo, and saw it as not much more than Feeding Frenzy in 3D. Maybe there was more to the leash concept or the interaction between the characters than what I discovered in the demo. Can you expand on that? I agree that the level of polish on this game is good. The characters have potential to be endearing, but I got the same level of… Read more »