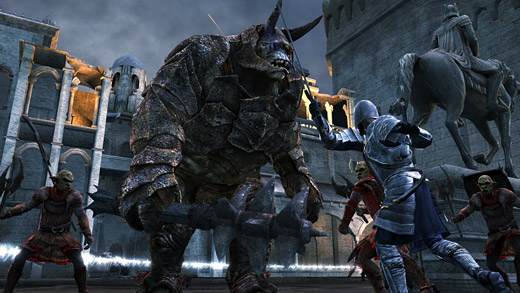 HIGH Finishing the game in two sessions and ending the agony ASAP.

LOW The entire project feels undercooked in every way.

WTF A bunch of f'ing hobbits take down the Balrog?!?

Taking everything that's great about The Lord of the Rings and stripping it away to leave only a carcass of mediocrity behind, Pandemic Studios has done what I had previously thought impossible; they've made the epic adventure in one of the greatest fantasy sagas of all time tedious, unappealing, and utterly joyless.

Structured as a large-scale combat game, Conquest starts off by putting players on the side of good and follows a series of battles similar to those depicted in Peter Jackson's outstanding trilogy of films. Offering four classes to choose from (Warrior, Archer, Scout and Mage) players will choose a soldier of their liking and then complete a series of objectives on each map—things like capturing checkpoints, eliminating certain enemy officers, and so on. It's a fairly straightforward formula that Pandemic manages to completely botch in a number of areas.

Far and away, my biggest gripe with the game is that the balance between units is absolutely skewed. Out of the four available, the Archer and Scout are essentially worthless, the Warrior is only useful in a small number of extremely specific circumstances, and the Mage dominates over all else. With his potent fireballs, a magical shockwave that controls crowds, projectile-like lightning for a standard attack and an ability to heal himself that the other classes lack, there is absolutely no reason to play as anything besides a Mage.

Besides this lack of balance, the combat is stunningly imprecise and awkward. Attack animations sometimes launch characters well past their intended targets, the lightning from a Mage's hands will sometimes strike, sometimes not, and God help the player that gets knocked down in a crowd of enemies—you won't be getting up again. I was also particularly put off by the control setups. The way the buttons are laid out feels extremely haphazard and random, and don't carry over consistently between the classes. It's all quite messy and loose, an air of imprecision and a lack of tuning evident throughout. 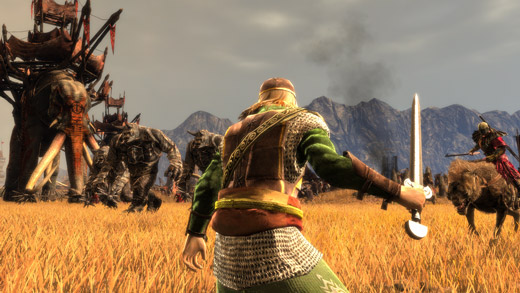 Enhancing Conquest's generally low-rent feel, the developers chose to thread the game together with stolid voiceovers and clips from the films. It's a shortcut that screams "shortcut," and does absolutely nothing to create the illusion that the player is participating in anything other than an exercise in pointlessness.

Obviously recognizing that players would want some hands-on time with the material's pivotal characters, at certain points in a battle, players will be asked whether they would like to control a "Hero"—usually a recognizable face from the films. After doing so, it only takes a moment or two to realize that Aragorn is a slightly modified Warrior, or that Gandalf is just another Mage. Adding insult to injury, they're not especially resistant to damage or noticeably more powerful. Rather than the rallying presence on the field they should be, there's little to differentiate them from the legions of generic grunts.

The one aspect of Conquest I was most looking forward to was the "evil" campaign offering players the chance to take control of Sauron's armies to sweep darkness across the land. It's slightly amusing to see a hypothetical account of what might have happened if Frodo had kept the One Ring for himself, but really, this campaign is just as inept as everything else. Starting off on the wrong foot, it's not even selectable until after the "good" campaign has been finished. Besides that needless annoyance, it's no surprise that the Dark Lord's orcs and Nazgul are direct analogues of the Warrior, Archer, Scout and Mage. There is no variety or surprise in playing the other side. The final insult was seeing the fearsome, flaming Balrog hacked to pieces by a small crowd of hobbits thanks to its extremely clunky handling and serious lack of power.

My time with the Lord of the Rings: Conquest was a tiresome, unimaginative and thoroughly lackluster slog whose only saving grace was that the entire thing can be finished in a day. Apart from failing to innovate in terms of gameplay and being so technically underwhelming, it's ridiculous that there isn't even any quality fan service happening for people who may be coming to the title strictly based on their love of the license.

With nothing to recommend it, I say toss this disc into the cracks of Mount Doom and be done with it. Rating: 3.5 out of 10.

Disclosures: This game was obtained via publisher and reviewed on the Xbox 360. Approximately six hours of play were devoted to the single-player mode, and the game was completed two times, once for each campaign. No time was spent in multiplayer modes.

Parents: According to the ESRB, this game contains Violence. Nothing extremely bloody or explicit, but the game is all about attacking humans or humanoids with swords, arrows, and magic spells. There is no questionable language and no sexual content. Pity.

Deaf & Hard of Hearing Gamers: You shouldn't have any problems. All in-game prompts are accompanied by text, and there are no significant auditory cues during gameplay. I don't recall seeing any subtitles during the between-level cut scenes, though… be warned.