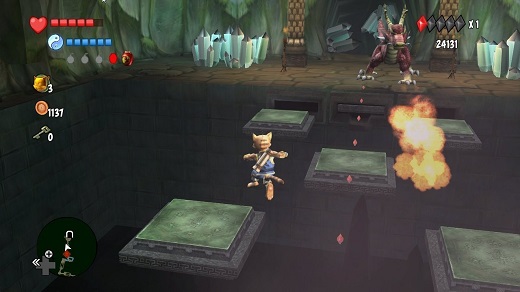 LOW The main character is a jerk.

WTF Did that boar have a heart attack and die immediately after the race?

The Legend of Kay was originally released for the PS2 in 2005, and it's a typical example of the generic character-action-platformers so prevalent back then. It wasn't a standout at the time, so I have to admit that the PR email announcing an anniversary release came as quite a surprise.

Now that I've got children I was curious if it would be a good fit for them, and I revisited Kay with my six-year-old son beside me. He was immediately interested in the main character (a cat) and the rest of the world made up of animals infused with an Asian theme, so I let him take the controller for the majority of play.

After getting through the painfully dull extended tutorial, Kay is shown to have an assortment of combos, double jumping, limited magic, and the ability to travel through the air by doing a combo. Apart from using this combo power to travel to high-up places, Kay's mechanics are about as standard as they come. It's not particularly terrible, but it's not particularly engaging, either.

The villagers scattered here and there throughout the semi-open world will send the main character on a quest to fetch one thing or another, and while the map markers don't always spell out exactly where the player needs to go, it isn't too tough to figure out what's going on. Like the mechanics, this content does what it needs to do, but it's nothing too noteworthy or worthwhile.

Despite the fact that the developers have cleaned up the visuals, Kay doesn't feel updated when it comes to the camera. Moving the viewpoint feels sluggish, and it tends to zoom in way too close, especially when trying to navigate platforms. Jumping frequently ends up being a lot harder than it needs to be because it's tough to get a decent view of things. Expect to retry anything aerial at least a few times.

While the gameplay did a middling job of keeping my son's attention, every time the comic-panel story scenes started playing, he immediately tuned out. I couldn't blame him—the script is far too talky, and the tale of gorillas and rats taking over peaceful villages is nothing to get excited about.

Speaking of the script, I was quite surprised to hear how salty and full of name-calling the dialogue is. It's not that there's outright swearing, but the main character is surly as hell, and characters often use derogatory terms when addressing someone else. "Rat bastard" might not be the harshest term I've ever heard, but it (and many phrases like it) felt like they crossed the line of appropriateness in a game with such obvious kid appeal.

My son was interested enough in The Legend Of Kay to play it for a few hours. However, even at the relatively inexperienced age of six, it wasn't long before he tired of its mediocrity. Once he put the game down, he had absolutely no interest in coming back. For a game whose major audience is ostensibly children, failing to keep a game-loving little boy entertained is a pretty damning indictment. I'm guessing Kay will fare even worse with older players who aren't limited to what their parents put in front of them. Rating: 4.5 out of 10


Disclosures: This game was obtained via publisher and reviewed on the PS4. Approximately 4.5 hours of play were devoted to the single-player mode, and the game was not completed. There are no multiplayer modes.

Parents: According to the ESRB, this game contains: fantasy violence, language, and use of alcohol. While the game looks like it would be pretty kid-friendly, the language and tone of the characters is actually pretty rude and nasty, and I was uncomfortable letting my son listen to some of the conversations. The violence is a non-issue, and the master character gets drunk all the time. It's not the worst thing I've ever seen, but I'd steer younger ones clear.

Deaf & Hard of Hearing: No audio cues necessary for successful play here, and all dialogue is subtitled. It's fully accessible.