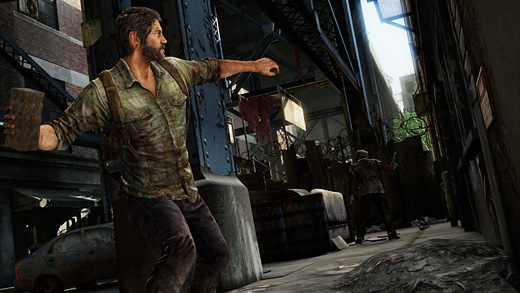 HIGH the scenic view in Utah.

LOW getting turned around in the first dark sewer section.

It's rare that Dan and I have wildly differing opinions on a game, but when it comes to The Last Of Us

, I couldn't disagree with him more.

Weak writing? It's some of the best script work I've ever seen.

Questionable design decisions?  There are places to improve, but most of what's here is brilliant.

Main character Joel is one of the least-likable protagonists in gaming history? I can't conceive of how he's even in the running.

However, I'm not going to pick apart Dan's review line-by-line and explain how he goes so tragically wrong.  Instead, I think it's more valuable to explain why The Last Of Us if is one of the best experiences I've had all year.  In this case…  It's the details.

More than anything else, the relationship between Joel and Ellie is one of the most well-realized that's ever been.  I'm a critic who puts a lot of weight on writing and characterization, and it's not overstating the case to say that Naughty Dog knocked it out of the park and the ball is still flying.

The Last Of Us begins with one of the most powerful opening sequences in recent memory and takes the time to properly lay the emotional foundation upon which the game rests.  From this point, the developers create natural dialogue and situations which are relatable, despite being set in a post-apocalyptic landscape haunted by the fungal undead.

For example, when coming across a magazine or half-ruined billboard from before the catastrophe, the brief exchanges that follow make Joel, Ellie, and the rest of the cast feel like so much more than hollow avatars in contrived levels.  Some players might be frustrated by listening to a debate on the plausibility of ice cream trucks, or why old-world supermodels looked so skinny, but that's exactly the sort of richness that makes it succeed. Most titles fail to see value in slowing things down and taking a moment to let their characters actually be, but The Last Of Us understands it perfectly.

That same sort of richness extends to the environments, which have no shortage of stories to tell.  In too many games, environments are little more than nonsensical architecture acting as storehouses for power-ups or places to slaughter enemies. In The Last Of Us, paying attention to where corpses lay, what they're surrounded by, and what scraps they left behind is like a running commentary that never stops bubbling beneath the surface.

The most memorable example was the posthumous tale of a lonely man hiding in a sewer, and how he unwittingly doomed a mother and her children. It would have been easy to ignore this lore on the rush to the next combat sequence, but taking the time to absorb the unspoken story (and the many, many other instances like it) imbue the adventure with thoughtful, meaningful atmosphere.

Not to harp on Dan, but it's things like this that make me disagree when he says that the game doesn't give players a chance to understand the world they've been tasked to save.  I found that The Last Of Us told me more than enough of what I needed to know and then showed me the rest…  The effort put towards bringing this dead world to life was spot-on.

As good the atmosphere and storytelling are, there's no doubt that The Last Of Us was built on a core of stealth and combat. It's gripping, visceral stuff and the developers went above and beyond in coming up with twists and variations, but I wanted more. I was disappointed that there were never any dialogue choices, and there were instances when I felt the game would have been better served by refraining from combat altogether.  Offering actions besides sneaking and shooting would have been marvelous-helping with chores when visiting Joel's brother or having an extended conversation in Utah would have given more to the narrative than yet another fight for life.

Though we largely disagree about the game as a whole, I find myself agreeing when Dan brings up odd problems like enemy gunmen almost never dropping ammunition, or the way Ellie is effectively invisible to enemies until a battle begins.  Neither of these things were huge issues, but they were strange choices in a game which otherwise takes such great pains to ensure everything makes sense and that it's easy to believe in the characters and their journey.

However, none of those odd things make a significant dent in the overall presentation, impact, and sophistication of The Last Of Us

.  As someone who didn't care much for Naughty Dog's recent work, I never expected to become engrossed in the story of Joel and Ellie the way I did, but it grabbed from the start and kept me captivated until the very end.  It may not be a perfect game, but it does set a new standard against which all other games like it will be measured, and it's safe to say that most will be found lacking. Rating: 9.5 out of 10.

Disclosures: This game was obtained via rental and reviewed on the PS3. Approximately 17 hours of play were devoted to the single-player mode, and the game was completed. No time was spent in multiplayer modes.

I’ve just gotten to The Last of Us recently, and while I respect Brad’s appreciation for its story elements (and give Naughty Dog credit for their above average efforts in that department), I find it less than compelling as a gaming experience for a number of reasons I don’t think the story overcomes and I don’t think most critics, aside from Tom Chick in the sole less-than-steller review on metacritic, have emphasized nearly enough. One problem, in my view, is the narrow and repetitive gameplay: almost all of the game consists of (A) sequences in which you follow a character… Read more »

Great piece of writing which clearly focuses on what exactly makes The Last of Us so great – not only the admittedly perfect blend of combat, graphics and high production values but the storytelling that actually gives the meaning and makes the game a total package. I proudly call myself a hardcore gamer with many years. platforms and games under my belt but not once have I seen a story that is so engrossing, compelling and believable despite being set in a largely fictional world. Every once in a while along comes a game that tries to set new standards… Read more »