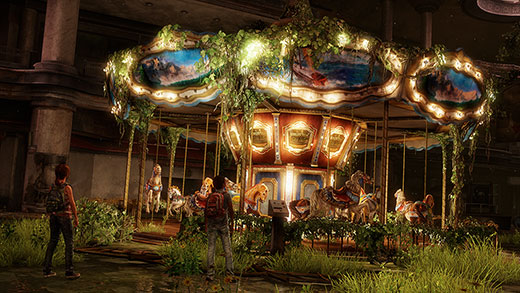 HIGH Too many to list here. It's all fantastic.

WTF Why didn't we get more ‘brick throw' moments before?

is a single-player add-on to The Last Of Us starring Ellie, the young female lead from the campaign. The content is split into two parts; one which shows what Ellie was doing while her companion Joel was incapacitated at the University. The other flashes back to the relationship between Ellie and her best friend Riley – a significant connection only mentioned in dialogue until now.

I won't say any more on the actual details of the story since that experience is something the player should experience for themselves, but Left Behind is interesting in that players who've completed the campaign already know the outcome of these events, and they're no less gripping for it.

Much like the core game, the content is absolutely mature in the best possible sense, and the writing is simply outstanding. The interactions between Ellie and Riley feel genuine—they are two living, breathing girls who have a close bond, and they do the things that young people do. They chat, they chide, they comfort and share… they're open and honest, and it's amazing to watch. Their interactions often reminded me of my own teenage years, and bringing this level of humanity into a game is something that few developers attempt and even fewer achieve. Left Behind comes off as so effortlessly masterful that it made me sit back and wonder why it hasn't been done more often – as if it was the only way a story like this should happen.

Also of note was the approach taken towards combat. Although The Last Of Us was my favorite game of 2013, it wasn't perfect.  There was simply too much combat and not enough instances where the characters were free to be themselves, but that situation has been rectified in Left Behind. There's very little combat, and the combat that does exist serves a more meaningful purpose and is more tensely impactful because of it. Less killing means more time for the characters to shine, and it's an absolute joy watching them do nothing more than walk and talk.

I'm also happy to report that unlike some DLC add-ons that feel a bit phoned-in, the insanely high level of detail from the main game is present in Left Behind. Each area is absolutely filthy with small touches and environmental storytelling, and the developers manage small nuances that others would overlook—footprints leaving tracks in the snow, or the way Ellie's exhausted hand smears blood on her face. There's even a secondary tale of soldiers who crash-land a helicopter for thorough players to discover.

The graphics are the best the PS3 is capable of rendering, the performances and voice acting are flawless, the script feels human and shows a side of Ellie that makes me love her even more than I already did, and it's the rare occasion when an add-on actually feels this rich and vital. Left Behind

is a fantastic piece of content, and Naughty Dog has again raised the bar for all developers who aim to tell character-driven stories. They just don't come better than this. Rating: 10 out of 10


Disclosures: This game was obtained via paid download and reviewed on the PS3. Approximately 2.5 hours of play were devoted to the single-player mode, and the content was completed. There are no multiplayer modes.