It sticks the landing 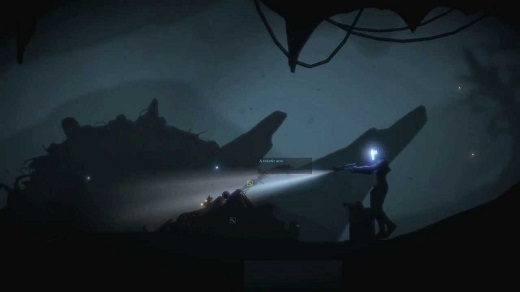 HIGH ARID is a fantastic character.

LOW Scrambling for an FAQ halfway through.

WTF Mushrooms are way too involved in this game.

If you ask me, there aren't nearly enough science fiction stories in video games these days. That may sound like a strange thing to say, but when I think of sci-fi, the term represents more than burly space marines blasting aliens in hallways. To me, the genre has always meant asking questions and positing potential answers, both from the perspective of what we know, and also from perspectives we can only imagine. From that viewpoint, The Fall is a genuine science fiction story, and it's one I greatly enjoyed.

The Fall begins with an armored combat suit falling through space, burning through atmosphere and landing hard on a strange planet. The human occupant of the suit has been knocked unconscious, so it's up to the onboard AI named ARID to get him to a medical facility for treatment.

I hesitate to say much more about the plot because the gameplay and narrative are so closely intertwined, and to reveal any particulars might give away key moments of the story. It's a compact adventure (around 3 to 4 hours, not counting any time spent stuck on puzzles) and it would be a true shame to ruin it. However, this synergy between its intellectual and mechanical elements is a strength, and one the developers should be commended for.

Essentially, The Fall is a point-and click-adventure. Players are free to explore the limited environments as they wish, but progress is made by finding items and taking them to a specific action point or location. An early example would be finding a keycard that unlocks a door, but things do get more creative than that. However, I've played too many games where it feels like the writers and game designers are on a totally different pages, which is why I'm so impressed with how deftly The Fall avoids this trap. Rather than disjointedly creating cut-scenes which illustrate something not reflected in tasks the player performs, ARID's quest for medical help meshes all aspects of story, theme, and gameplay perfectly. It's a difficult trick to pull off, but The Fall nails it.

Speaking of ARID, I found her (it?) to be a wonderful character. The Fall has its own version of Asimov's "laws of robotics," and as the game goes on, ARID will be have to test the limits of those rules in order to save the life of her human cargo. Her journey over the course of the adventure was a fascinating, thoughtful one, and while there's no doubt that she was an artificial intelligence, there was enough humanity in her to touch me and draw me in to her plight.

Although The Fall ends in a satisfying way and could easily be considered a complete story, I've been told that it's only the first of three chapters. With that in mind, I very much look forward to the next installment, and if it's anywhere near as good as this one, then fans of science fiction (like myself!) will be in for a real treat. Rating: 8 out of 10.


Disclosures: This game was obtained via publisher and reviewed on the WiiU. Approximately 4 hours of play were devoted to the single-player mode, and the game was completed. There are no multiplayer modes.

Parents: According to the ESRB, this game contains: violence and blood. The violence consists of ARID shooting generic robots or pulling their batteries out from behind their backs. A few alien creatures also get shot, but it's all very subdued and abstract. I let my 5-year-old watch me play the entire game and had no concerns over content.

Deaf & Hard of Hearing: There's one brief scene when ARID is watching a TV that's not subtitled, but otherwise it's fully captioned and there are no audio cues necessary for gameplay. I'd say it's fully accessible.

“If you ask me, there aren’t nearly enough science fiction stories in video games these days.” I agree! Especially third-person spaceships you can fly around. I was more in agreement with Sparky’s review of The Swapper than your own. I enjoyed the puzzles, environments, and the mechanics, and especially how they all integrated. Is it completely different in atmosphere and mechanics? The screenshot makes it look a little similar… I downloaded one of the Monkey Island games for Xbox360 and the point and click really put me off – I mean I really hated it! In what way is it… Read more »

It’s *totally* different than The Swapper. Different story, different mechanics. It may look similar visually, but they’re not at all alike IMO. As far as the point-and-clickness, you have similar interactions with items, but there’s also some realtime gunplay and a few other aspects that wouldn’t generally fall under standard P&C design.

totally about The Fall but completely offtopic I just realized that The Fall: Last Days of Gaia, released a decade ago, was only released in very few countries. Which “allows” this The Fall game to have the same name? I thought “my” The Fall was only unsuccessful because it was buggy at launch. Mostly fixed in the Extended Version. But as i read now it actually never got a proper worldwide release. Metacritic sites don’t even list it… A real shame. Probably the only (sort of) turn based game (you can totally choose if its all realtime or fully turn… Read more »