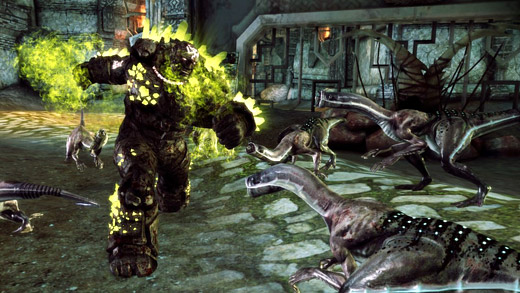 As is somewhat apparent, I've been spending some time (a lot of time, actually) with BioWare's Dragon Age: Origins. Although it's got a few issues, it's a great Adventure-RPG if you like the style as much as I do, and it's had no trouble keeping my interest. However, there has been something that's been bothering me about it—the character Shale.

For those that don't know, Shale is an extra character that can be recruited into the player's party. A powerful wrecking-ball of a golem with a witty personality, he's a very attractive prospect. The issue? He's only available via DLC.

This fact isn't really an issue for me personally since I ponied up for the Collector's Edition. In that particular package, the DLC is included. However those who bought the standard retail version will have to pay extra to get the same content I'm going through right now.

In general, I actually enjoy DLC quite a bit—it can add new life to games that might otherwise be shelved or traded in, and anything that can extend the life of a great disc gathering dust is welcome in my eyes. However, I'm starting to question the ethics of DLC… specifically, DLC that launches day and date alongside a "complete" retail game.

After downloading the extra mission and unlocking the character, it was quite obvious that this character was fully integrated into Dragon Age in every way. He has tons of dialogue and fits in seamlessly in every situation. Rather than just being an obvious "add-on", Shale feels as though he absolutely belongs. Ordinarily I would say that this was a great job of integrating extra content and give kudos to the developers, but since this package was available as soon as the game hit retail, it's a little hard to ignore the evidence suggesting that rather than being an "extra", Shale was possibly removed from the game and turned into DLC—or at the very least, it was planned as a part of the game from the start.

Don't get me wrong—I realize that publishers and developers need to make money. They're not in this business for any altruistic purposes. These people need to be paid and their families need to be fed. That's not in dispute. Furthermore, they are at liberty to do whatever they want with their product. Gamers aren't "entitled" to anything really, so we either take what people sell us or we find a new hobby.

That said, I can't help but have some internal questions about the "proper" role of DLC, if such a thing can even be said to exist—and if it does, what is it? Is there a line that shouldn't be crossed? If so, where's it drawn? Who draws it?

In this particular case, it feels a little dishonest to me to think that a complete game might have been carved up and split off into fragments as a way of increasing profit. At the same time, I have to admit that it's a very irrational sort of feeling since as I stated, gamers have no right to anything at all, except the right to not purchase something. Nobody's forcing anyone to purchase anything, and as long as the standard game isn't a gutted shell, then it's a matter of player's choice.

Looking at Dragon Age (and it's hardly just BioWare/EA, by the way… plenty of others have had launch-day DLC as well) the game is certainly "complete" without the extras in the sense that there's plenty of content and a beginning/middle/end. It's not an unfinished game, to be sure. Still, I just can't get over the quasi-tainted feeling I get knowing that the plan was to have these things as extras well in advance of the game's launch. Giving players more of what they want after the game's met with favorable reception is one thing, but intentionally keeping back certain dimensions of the game for those that don't pay extra seems like another. Logically, I can't assign any sort of moral misdeeds given the profit-based product nature of gaming, but at the same time, I would still feel taken for a bit of a ride if I had had to pay for something that's so obviously engineered into the "full retail" version in such a premeditated way.

It seems like parsing out a game's substance, attaching a dollar value to each segment, and coming up with a justifiable definition of what a "complete" game entails is a very slippery slope to me, and while we're all sort of finding our way with DLC, I can't help but feel that things are going to get worse before players, developers and publishers can all agree on a comfortable middle ground.

Edit: I've been informed that despite sporting a $15 pricetag online, the Shale DLC was free in every copy of the game and not just the Collector's Edition as I had previously thought. My error there and apologies for that. I've earned a -2 in my Fact Checking stat, and you can consider my crow eaten—but the general issues raised with same-day releases remains. (Additionally, as a point of clarification, the Dragon Age Warden's Keep DLC also launched on day one, and that's a paid download.)

That’s very true. Although I picked Shale as the DLC example (my error, of course) Warden’s Keep is a must-pay that contains the item box… an incredibly useful item for a game like DA:O. i was a little surprised that there was NO way to store items without it.

Normally, I agree that same-day DLC is BS when we have to pay for it. Clearly that smacks of profiteering and holding back on the final product. However, in Bioware’s case, they are trying to combat used game sales. This free DLC will only remain so until early next year. I think it’s a creative way to combat the used games market and particulalry Game$top. The only real tragedy here is for those without a broadband connection or harddrive. Now speaking of features that should have been included in the game, what’s up with Warden’s Keep!? I have to pay… Read more »