These Appearances Are Deceiving 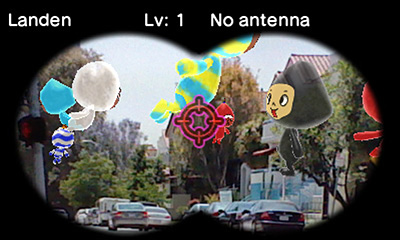 LOW The grind factor went way up since the first game.

WTF Why can't I find a Denpa Man with Heal-All?!? Waaaaaah!

Everyone knows the old adage about not judging a book by its cover, and in the case of The Denpa Men 2: Beyond the Waves, it's certainly true. At first glance, the brightly-colored characters sporting bodysuits and strange antennae suggest a game that's light, approachable, and squarely within the usual range of "standard" Nintendo experiences. No one could be blamed for thinking it was some sort of beginner's role-playing game (RPG).

Don't be deceived. Underneath the pleasantly cartoonish visuals and chirpy music lies a grind-heavy chore sure to test the fortitude of all but the most hardcore.

In Denpa Men 2, the story is of no real consequence. Instead, it's more important to know that this turn-based RPG will ask players to take a party of up to eight characters into dungeon after dungeon filled with enemies that have little problem ending things in short order. The key to success is grinding out levels to increase the stats of the party, as well as earning enough money to equip them properly.

It's a lot of slow work, although it's not without its pleasantries. For example, I happily completed the first Denpa Men soon after getting my 3DS, and the leap in polish and usability since then is easy to see. Menus have been streamlined, players are free to teleport between locations with almost no restrictions, and the combat system for managing eight players is even better than it was before—and it was great then!

Rather than getting bogged down in micromanagement, it's simple to give quick orders to specific characters, or to command the entire group at once. The AI managing behavior en masse is also quite sharp. Healing, attacking, and magic usage all happen when I think they should, and this efficiency takes unnecessary button-clicking out of the equation. The developers have clearly put a lot of time into making sure that Beyond the Waves is a smooth experience, and from a certain perspective, it is.

On the other hand, the difficulty of the game is steep and the encounter rate is ridiculously high. Forward progress is measured in inches when the game tosses battle after battle at the player, and it's not an exaggeration to say that I would often finish one fight and then get into another less than a second later, only to run into yet another battle a second or two after that one. It's unpleasantly excessive.

Compounding this issue is the main hook in Denpa Men: players collect characters by using the 3DS to scan local Wi-Fi signals. Go to any place with a wireless connection and the game will generate recruitable party members based on some sort of algorithm. It's a neat idea, but the player's success in battle relies on having characters with the correct powers and resistances for each dungeon. Since there's no way to pick and choose these things at will, I frequently found myself with a party that didn't quite cut the mustard.

The game attempts to compensate for this randomness by letting players scan QR codes, but instead of reading random codes the way the game uses Wi-Fi signals, the codes must be generated by other players and exchanged via the Internet, or other means. Again, a neat idea, but hampered by the fact that it relies on people discovering and uploading characters, and upon the player to do a fair amount of searching to find the right character for the right situation.

Although I badly want to like The Denpa Men 2: Beyond the Waves more than I do, the honest truth is that it's a hell of a lot of work for a game that's basically nothing but grinding through dungeons. If the difficulty and frequency of encounters were just a bit lower, the insanely high cute factor would be able to carry the experience and I probably would have powered through. Instead, it's way, way too much effort for too little return—my patience and stamina wore out long before the credits rolled. Rating: 5.0 out of 10.


Disclosures: This game was obtained via publisher and reviewed on the 3DS. Approximately eight hours of play were devoted to the single-player mode, and the game was not completed. No time was spent in multiplayer modes.

Parents: According to the ESRB, this game contains fantasy violence. The game never shows anything more graphic than cute, colorful dudes running up and bopping enemy caterpillars, stingrays, or birds. There is no sexual content, and no salty language. Although I think it's way too hard for kids, there's nothing here that's concerning in terms of exposure.

Deaf & Hard of Hearing: All dialogue is subtitled and because the game is turn-based, there are no significant auditory cues necessary for gameplay. It's totally accessible.