The fifth time's the charm! 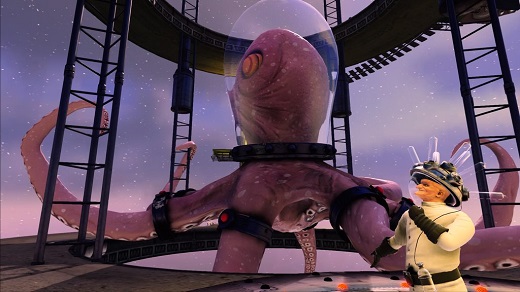 HIGH The director's commentary is brilliant.

WTF Some max-level weapons are weaker than mid-level ones?

I've played every title released by Chile's ACE Team since they formed in 2009, and although I usually find their work interesting, it's all been significantly flawed in one way or another. It's a shame because they're a team with a strong visual designs and plenty of fresh ideas, but when it comes to technical stuff and honing gameplay, they never quite get there.

The Deadly Tower Of Monsters, their fifth console title, gets there.

Like every other ACE Team project, it starts with a unique premise. The top-down, third-person action is positioned as an old sci-fi film from the 50s, so what the player is doing on-screen is what the audience in a theater would've ‘seen.' At the same time, the ‘director' of the movie is recording a commentary for the faux film's re-release, and he's sharing stories via a nearly-continuous voiceover. This is a highly unconventional premise, but it absolutely works because the developers embrace it with both arms and go for broke.

The ‘star' of the show is Dick Starspeed, exactly the sort of generic-looking white guy that would have been commonly seen in a film from that era. He's joined by a redhead in a skintight bodysuit named Scarlet and a clunky robot named Robot, who's meant to look like an actor who can barely see out of the costume's eyeholes. Although each of the heroes is largely the same in terms of ability (they all share the same ranged, melee and jetpack skills) they each have one or two unique tricks for passing specific barriers in the environment.

Simply playing the game is satisfying enough—the shooting and combat with a variety of weapons gets the job done, but the enemies are a real high point. The monsters in The Deadly Tower are a grab-bag of every creepy-crawly thing that ever slithered its way across a silver screen—pulsating brains with eyeballs, giant bugs, angry dinosaurs, pie-plate UFOs, robotic monkeys, giant octopi, living statues… it's all here, and it's glorious. Not only are these loving callbacks, they're animated properly, too. Half of the critters look like stop-motion sculptures that Ray Harryhausen might have done on his worst day, and the others are ether suspended from visible strings or made to look like obviously-rubber suits.

Carrying the same made-on-the-cheap idea forward, some scenes flash glimpses of boom mics dropping into the frame, the film crew pop up in the background, and the director's voiceover puts the most perfect bow on top of everything. The voice actor perfectly sells the role of being a burned-out, D-list Hollywood hack, and his frequent quips on what materials they used in production, the difficulties he had with the actors, and what a pain it was to use animals are great. There's also a little bonus bit in the script that comes right at the end… I didn't see it coming, but it was a hoot.

I'm quite happy to see that ACE Team has finally clicked all of their elements into place, and if there's a better homage to 50's schlock than The Deadly Tower Of Monsters, I have no idea what it could possibly be. For fans of the material or the era, this is a big win from start to finish. Rating: 8 out of 10


Disclosures: This game was obtained via publisher and reviewed on the PS4. Approximately 5 hours of play were devoted to the single-player mode, and the game was completed. There are no multiplayer modes.

Parents: According to the ESRB, this game contains: violence. Parents, it's super safe.The violence is blasting rubber monsters with goofy rayguns, or whacking them with fakey swords. If you'd let your kids watch a 50's SF flick, this game is the same level of content. Harmless!

Deaf & Hard of Hearing: No issues here. All dialogue is subtitled and there are no significant audio cues necessary for gameplay. It's all good.