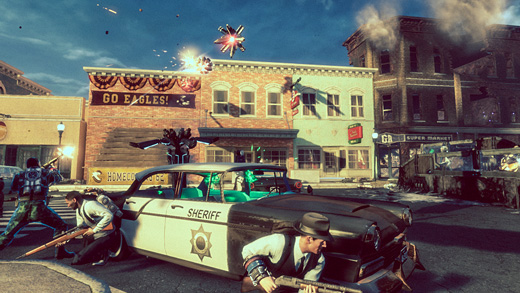 HIGH Fantastic style and a great story with genuine surprises.

LOW Brutal starting difficulty. The endgame has too many mobs.

WTF Finishing only one investigation short of a perfect run!

Trying to capitalize on a successful franchise is risky. Change too much, and the fans revolt. Don't change enough, and it's a cash-in. Creating a spin-off that shares the same brand but little else? That's a minefield. The reward must be worth it for those that manage to navigate the dangers, but it seems that some titles would be better off avoiding another's coattails altogether.

As such, the best way to appreciate The Bureau: XCOM Declassified

is to ignore any connection to the 2012 turn-based strategy hit, or the older games that spawned it. Doing so allows certain expectations to be put aside, and that would only be to its benefit because The Bureau is not a good XCOM game. However, it's a solidly enjoyable sci-fi actioner when taken on its own terms, and one that deserves attention.

The Bureau is set in the early 60s and puts the player in the role of agent William Carter, working for a secret government branch defending the United States from alien invasion. When the extraterrestrials finally reveal themselves, it's up to Carter and the other agents to take back the land of the free and the home of the brave—but don't be fooled into thinking it's as simple as that. Without any spoilers, I can say that things may start off predictably, but there are some amazing surprises in store.

Story aside, players can expect squad-based, cover-based shooting seen from a third-person perspective. Carter is controlled directly, but he can be accompanied by two teammates. The twist here is that players must micromanage their actions in the field, but I don't mean that as a negative. While there was an initial learning curve when I assumed my squaddies would be more autonomous than they are, everything fell into a comfortable rhythm once I figured out how to use them properly.

When in a mission, combat happens in real time until the player needs to give orders. With a button, a radial menu pops up and time slows to a crawl without actually stopping. Teammates can then be told where to take cover, which enemies to target, and when to use special abilities. The Bureau wants players to be in control of all three members of the squad at all times, so thinking tactically on a granular level is more effective than trying to "lone wolf" it and hoping the other guys survive.

I learned to appreciate this system's flavor after the initial frustration, but 2K Marin don't do themselves any favors by making the game so lethal as it begins. Not only is it unusual to do so much management in a quasi-real-time situation, the starting characters are weak, and prone to being downed in the blink of an eye. It's all too easy to get locked into a vicious cycle of having one character revive another, only to have the one doing the healing go down as well. 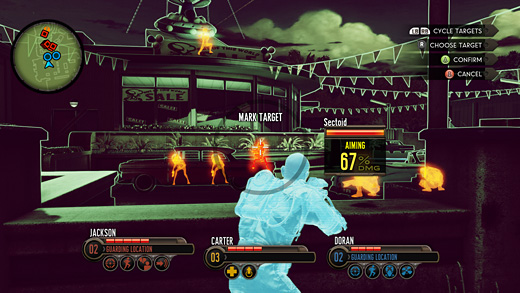 However, things improve dramatically once the characters level up. Not only do they start surviving longer, they unlock special powers that turn the tide when used effectively. Carter can lift enemies up from behind cover to expose them, or deploy a flying drone to snipe from the air. Scouts can deliver devastating critical strikes, assault troops push aliens down with a force wave, engineers employ auto-turrets, and more. Unleashing hell on the invaders with these nifty sci-fi tricks feels great, and there's a good variety available.

In terms of level design, each area is essentially one long hallway with a few twists and turns, but while linearity is often used incorrectly, The Bureau gets it right. Since success depends on properly managing the teammates, keeping the areas focused takes some pressure off of the player. Rather than having to defend from all sides, slowly advancing troops while juggling the various abilities is just enough to handle without becoming too overwhelming.

The linearity of the levels is also made more palatable by the outstanding artistic design. 2K Marin absolutely nails the atmosphere and characteristics of the period in which The Bureau takes place, and every area seems like a classic slice of Americana. From the quaint filling stations on the outskirts of town to the battles taking place on Main Street, USA, the scenery's taken straight out of a visual history lesson. The more fantastical elements are just as polished—sites of alien devastation and otherworldy architecture often made me pause to take in the impressive views.

2K Marin did equally well with the ambient storytelling. Although BioShock is often held up as the gold standard, The Bureau does fantastically while staying grounded. Instead of an unhinged dystopia, players walking through the XCOM base will find an impressive amount of believable background conversations, backfiring lab experiments and a wealth of other little details that sell the idea of this story happening in a simpler, more straightforward time. If nothing else, the portraits of JFK on the walls and the shocking amount of people smoking in the first few cut-scenes will set the proper tone.

I also want to give special praise to the writers for what they've done with the characters and storyline. At that point in America's past, white men with Vitalis in their hair were in charge of everything. That historical flavor is communicated here, although it's been tempered with a black pilot who's respected by the others and a great female character who comments on the difficulty of accomplishing her goals as a woman in a man's world. The entire situation is mildly uncomfortable from a modern perspective, but that's what I appreciated about it—for a game that tries so hard to capture that point in time, it would've been dishonest to ignore the societal structure that existed then.

After everything I've written, it should be quite clear to XCOM fans that The Bureau: XCOM Declassified

is an entirely different kettle of fish despite sharing a few superficial elements. If the developers hadn't tried to connect the two, I suspect that more people might be pleasantly surprised by what it offers—a fantastically detailed 60's setting, an interesting approach to squad-based shooting, and a genuinely surprising sci-fi story that's told with panache. Well done, 2K Marin. Well done. Rating: 8.0 out of 10.


Disclosures: This game was obtained via publisher and reviewed on the PS3. Approximately 14 hours of play were devoted to the single-player mode, and the game was completed. There are no multiplayer modes.

Parents: According to the ESRB, this game contains blood and gore, strong language and violence. This one is definitely not for the kids. The action is all about shooting aliens, and while it's not the bloodiest thing I've ever seen, it's pretty clear what's going on. There's also plenty of salty language in the cut-scenes, and the game (as a whole) takes a very adult slant on its content. There is no sexual content.

Deaf & Hard of Hearing: You will have no problems. All dialogue is accompanied by subtitles, and in areas where the team is sneaking up on aliens unaware, there is a very obvious "pull out your guns" animation that signals when combat is about to begin. During combat, it's very obvious when characters are being shot, and the mini-map clearly details enemy locations. I found no audio cues necessary for successful gameplay.

I’d stop short of calling this game great, but it’s good-ish. There are a lot of positives – the plot, the setting, the environment design etc, and I loved being able to walk around the XCom base and chew the fat with the scientists and engineers between missions. The difficulty settings didn’t do the game any favours though. There are four – Rookie, Squaddie, Veteran and Commander – and it defaults to Veteran, I think. I’d heard the game had some issues, so I turned it down to Squaddie initially. It was pure hell. As mentioned in the review, your… Read more »

Thanks Brad. I have been eyeing on this one for a while but haven’t got the time to actually play it.

For the good-game-but-not-xcom-ly thing, I have suspected it was the case. I feel like this sort of expectation differences have at times costed some game developers dearly. Anyway I’ll definitely put this game on my list now.

Thanks for reading… Would love to hear your thoughts when you get around to it. ^_^

Yeah. I hear ya… If I had to pick one thing that was the biggest problem, it would be the difficulty for sure.

I bought this day one to suport the title, but haven’t played it yet, as I’ve been busy with other things. Too bad it probably won’t get a sequel.