Where is this going? 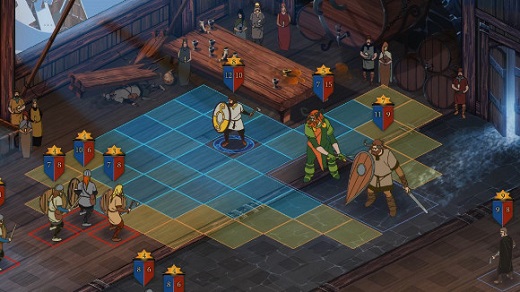 LOW An emotion-free popup box telling me that someone died.

In his main review of The Banner Saga, Darren Forman says that the developers are juggling a lot of elements that they nearly pull off. I largely agree with that assessment, but Darren was being generous. Although the aesthetics are great and some of the ideas are strong, the overall experience feels both uninvolving and unfinished. The devs are a little further off than ‘nearly', I think.

The Banner Saga starts off on the wrong foot. After a brief bit of text, a load of unfamiliar words and character names get tossed around, but a lack of context renders them meaningless. There are some giants and men who are all on a journey, but it's not clear who they are, where they're going, why, and worst of all, the case for why I should care about any of it never gets made.

As the game went on, the lack of connection with the events and characters continued to be a problem. More and more people were introduced but I had a hard time remembering who was who, and when the writers started burbling about places and things happening offscreen, it felt like a constant stream of disjointed Nordic lore. It's lovely to craft a fantasy world, but without more ways to be involved in it, immersion never happens.

As the group travels from place to place, situations pop up and ask the player to choose from a variety of options, but they're all text boxes with no accompanying animations or graphics aside from a small portrait pic. Too often they feel like blind choices based on luck, rather than leveraging something I've learned or done.

How many enemies are in the nearby village? What's the terrain? How far is it? How much do we stand to lose if we go there?

Does the human upstart want go to the town on the coast, or not? If he does, is this a good or bad thing? What are the ramifications of sending him back home?

If I don't have a clue as to what the answers might be, how am I supposed to make a meaningful decision? Without more information or connection to the stakes, these literal popups fail to bring drama or suspense; I'd just choose something at random and roll on.

At times the game seems to put importance on managing resources, but this aspect is as satisfying as the narrative — which is to say, not very.

The Banner Saga moves the caravan without any choice given to the destination, but having enough food for the journey is a factor. So why do I not know where we're going or how much food it will take to get there? Similarly, the group will encounter enemy armies on the road (also represented by text popups) so they're just more blind choices. I have 836 troops and they have 755, so what's the tactical difference between ‘Formations' and ‘Hold Them Off'? I have no idea, and the game doesn't bother to tell me.

The small scale combat in The Banner Saga is slightly better, but not much. Splitting each character's values between armor and life is a new twist, but the battlefields are flat areas with no cover or distinguishing features, the AI is too predictable, there aren't any skill trees, and there's nothing to equip besides a few items that give minor buffs. After doing a handful of samey battles in a row between towns, I lost all interest in continuing the fight.

It's a shame that The Banner Saga falls so short in most aspects because the art style is pleasantly distinct – it could pass for a long-lost animated feature rescued from some dusty archive, and the battle animations are lushly fluid. In addition, Vikings and Norse themes aren't used often in games, so it's good to see the material explored in a new way. The music is evocative, and a standout in the presentation.

Unfortunately, the art and music aren't enough to outweigh the improperly-established narrative and the flat, repetitive combat. The idea of going on a perilous journey with Vikings is a good one, but the game feels more like a late-stage Beta than something that's truly ready for prime time. Without better storytelling and richer systems, The Banner Saga is just unrealized potential. Rating: 5 out of 10

Disclosures: This game was obtained via publisher and reviewed on the PS4. Approximately 6 hours of play were devoted to the single-player mode, and the game was not completed. There are no multiplayer modes. Special note for Deaf and Hard of Hearing players: The missing subtitles mentioned in Darren's review have been added, so all spoken dialogue is now accompanied by text.