Amazing? No, pretty much as expected. 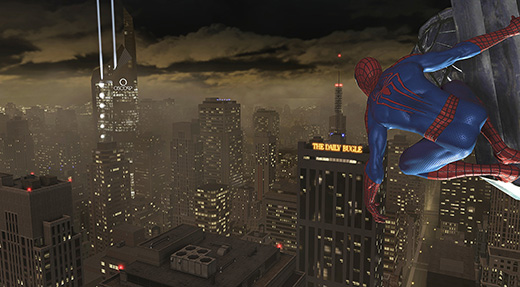 HIGH Swinging smoothly in a maze of skyscrapers.

I haven't played a Spider-Man game in quite some time, but after starting The Amazing Spider-Man 2

on PS4, I had an intense sense of déjà vu. Despite a few touch-ups and tweaks, this creaky, tired game could easily pass for something from the very early days of the PS3, or even the PS2.

Not having seen the new Spider-Man film, I can't say how closely its story hews to the source material, but I can hardly imagine someone will come to this game for the plot. The writing is low-rate stuff that's not worth the time it takes to click through, and the "choose which question to ask" segments don't seem to alter any outcomes. I found myself skipping through the convos as quickly as possible to get back to the action, although that's not to say the action is much better.

To start with the good, the game's at its best when Spidey is swinging between skyscrapers and maintaining good momentum. Each of Spider-Man's hands is controlled by its own button when in the air, so it's possible to pull off some smooth-looking moves, including going around corners and varying height and trajectory on the fly. I also appreciated the "web rush" which puts the world into super-slow-motion. When in this pause, it's possible to select a specific point in the area and have Spidey automatically zip there. It's handy, and gives a nice level of control when desired.

Unfortunately, that's where my compliments end. The rest of Amazing Spider-Man 2 was an outdated, boring project that felt obsolete as soon as I started.

Although I just praised Spidey's movement, it's only praiseworthy when it works. When he misses a swing or ends up in territory that's not easily navigable, the game goes full-squirrel and all sorts of wonky things happen.

Movement in interior locations isn't too bad when the rooms are spacious enough to allow for good camera movement and perspective, but some places are too tight, and it's awkward to get through them. The worst are the sections where Spider-Man has to rescue people from burning buildings. I failed them time and time again because they were too hard to navigate, and the frustration was too high. I soon gave up and consistently let those people burn without feeling the slightest bit guilty about it.

The main quest line is decent enough, but not memorable in any way. I'd guess it might satisfy people desperate for a few hours with Spider-Man, but anybody coming for the open-world experience will likely be disappointed.

Amazing 2's city feels fairly empty, and although it's peppered with random crimes to be stopped, they're all cookie-cutter copies of the same few types. Once the player has done one, the rest are just more of the same. The enemy models repeat, the scenarios repeat, and apart from the superfluous EXP points they award, the only reason to do them is to keep law-enforcement troops at bay.

In a painfully mechanical twist, do enough of these good deeds and the "hero" meter rises, keeping Spidey in ‘friendly' territory. Ignore the mindless side missions because they're terrible, and the cops will be constantly in pursuit. It's an annoying system that punishes the player for avoiding the dull stuff, and I quickly started mainlining the quests and ignoring the world altogether.

Technically, the game is on the shoddy side. The graphics are bland,  frequent load times interrupt the action, and I found myself getting stuck on geometry or clipping into objects. The combat system seems to be swiping inspiration from the free-flow fisticuffs of the Arkham titles, but it's a half-hearted button-mashy attempt that doesn't use it to any great effect.

Although The Amazing Spider-man 2

isn't a catastrophic disaster by any means, there's also absolutely nothing to recommend it. If not for the tie-in to the recent film, I'd say that it has no real reason to exist,  and I can't suggest it to anyone except hard-core Spider-Man fans—and even then, they should probably wait for the inevitable price drop before putting a weekend into it. Rating: 4.5 out of 10.


Disclosures: This game was obtained via publisher and reviewed on the PS4. Approximately 5 hours of play were devoted to the single-player mode, and the game was not completed. There are no multiplayer modes.

Parents: According to the ESRB, this game contains: mild blood, mild suggestive themes, and violence. Everything here is basically what someone could expect from a comic book, so nothing was especially noteworthy of caution. Violence-wise, Spidey kicks and punches a lot of random thugs, and it isn't more graphic than that.

Deaf & Hard of Hearing: All dialogue is subtitled and I didn't find that any cues were necessary for gameplay. I'm calling this one accessible.