This weekend is another one of GameStop's heralded "Buy 2, Get 1 Free" sales, and being the bargain shopper that I am, I couldn't resist.

I try to make it down every time the sale happens, but my biggest problem is that I can usually find two games and never a third. I leave empty-handed more often than not simply for the fact that I can't find that third game to make it worthwhile, but this time I got lucky. 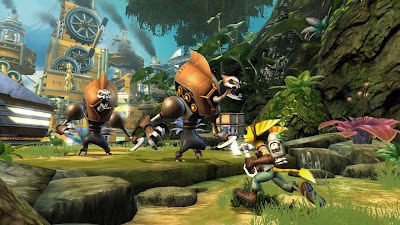 Picking up a copy of Ratchet & Clank Future: Tools of Destruction for PlayStation 3 was a no-brainer. I've been a fan of the lombax and his robotic sidekick since day one, and although I beat the game quite a while ago, I still didn't own a copy.

The second sure thing was Lock's Quest on DS. Sort of a quasi-RTS (but not really) that involves a character usually rebuilding and fortifying bases to stave off oncoming hordes of enemy robots, I had a great time with this a while ago and was glad to see that the copy I found today was in great shape. 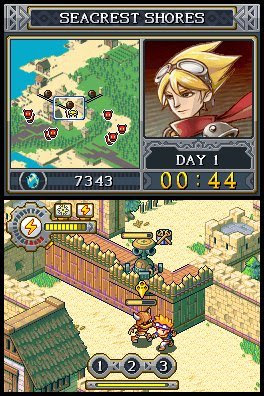 With these two games in hand, I was quite determined to find a third. There wasn't a lot that I wanted for a reasonable price, my oldest was with me and he was getting a little bit antsy, and the wife was outside with the baby, so I knew the countdown to go-time was ticking. Taking one more sweep through the PS3 section, I decided that it was finally time to give Lair another try.

Put out by Factor 5, you may recall Lair as one of the most-hyped titles when the PS3 launched. The main idea is that you control a huge dragon and fly around fighting other dragons, burning things on the ground, and so on.

Just from the description it sounds like a can't-miss, but it was savaged in the reviews at the time for a number of reason—one of the primary ones was that control of the dragon was linked directly to the motion of the Sixaxis instead of a more traditional setup. I tried it briefly and found the controls as atrocious as most said, so I quickly moved onto other things. However, I was aware that Factor 5 had produced a download patch that gives players the options for standard flight controls using the sticks, and considering that I needed a third game to get one free, I was willing to give it another chance. 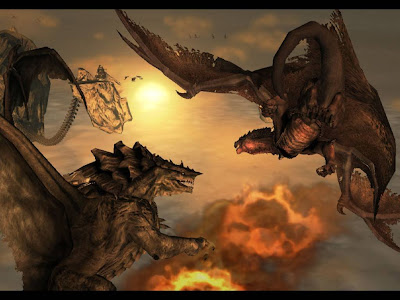 Although the new non-motion controls work and do make the game better than it was, there are so many other things wrong with it that to call it anything other than a wet, dripping mess would be completely inaccurate. Honestly, I have no idea what the developers thought they were doing when they put this game together. I mean, the terminally flawed idea of basing the entire thing on motion controls aside, it was as if they had completely forgotten everything they had learned creating the lauded Rogue Squadron series.

For example, at times it's practically impossible to tell enemies apart from allies until they start squawking at you to stop firing. There are no maps or on-screen indicators to let you know where enemies are, and the arrow in the top corner of the screen which is supposed to point towards your objective is rendered in such a way that it's extremely difficult to tell what direction it's even pointing in.

There are scores of other problems with the game ranging from embarrassingly bad graphics (enemies on the ground look like orderly rows of LEGO people) and unexplainable dragon actions (move the stick left and it goes forward, or try and fly up and all you can see is the dragon clipping through the ground) and given the generally execrable quality of the title, it really puts the recent allegations of financial misconduct at Factor 5 in a whole new light… money for margaritas but not for map markers, eh?

In other game news, I decided to send Red Faction: Guerrilla back to GameFly unfinished. I think I saw perhaps a third of the game, and felt like that was enough.

Although I was quite impressed initially by the physics and the destructibility of the environments, it soon became clear that the game didn't have a lot else going for it. I mean, don't get me wrong… I'm not saying that it's terrible, but it follows the guidelines for typical "open-world" design very closely and after having played quite a few of them, I need something a little more exciting than destroying buildings with a big hammer to get my juices flowing. Driving from location to location just to knock down a silo or barracks got old fast, and after not having played it for a couple of days, I felt virtually no desire to get back to it.

[quote=same Anonymous]jesus the ps3 is some kind of developer killer i kind of feel bad for em but at the same time id like to know what the fuck were they thinking? and where did all those years of experience go?[/quote]How about developer bloat? Factor 5 went from being the Rogue Squadron developer for Nintendo to working on at least three projects at once. Maybe the execs at Factor 5 just couldn’t keep things in check once Factor 5 was let loose onto other platforms. Maybe being out from under the watchful eye of Nintendo had something to do with… Read more »

jesus the ps3 is some kind of developer killer

i mean factor 5 and free radical, both experienced developers, with critically acclaimed franchises (Rogue Squadron and TimeSplitters), they both worked on concepts on the ps3 that werent that far from the ones in their best games (lair-flying simulator, haze-fps), their projects were hyped like shit only to bomb so hard it basically eradicated both devs

i kind of feel bad for em but at the same time id like to know what the fuck were they thinking? and where did all those years of experience go?

This was pretty timely Brad. I was just thinking to myself yesterday about possibly checking out Lair. I knew the reviews were extremely critical of the game, but I also knew about the patch, and was curious for probably the same reasons as you. Thanks for saving me the time.