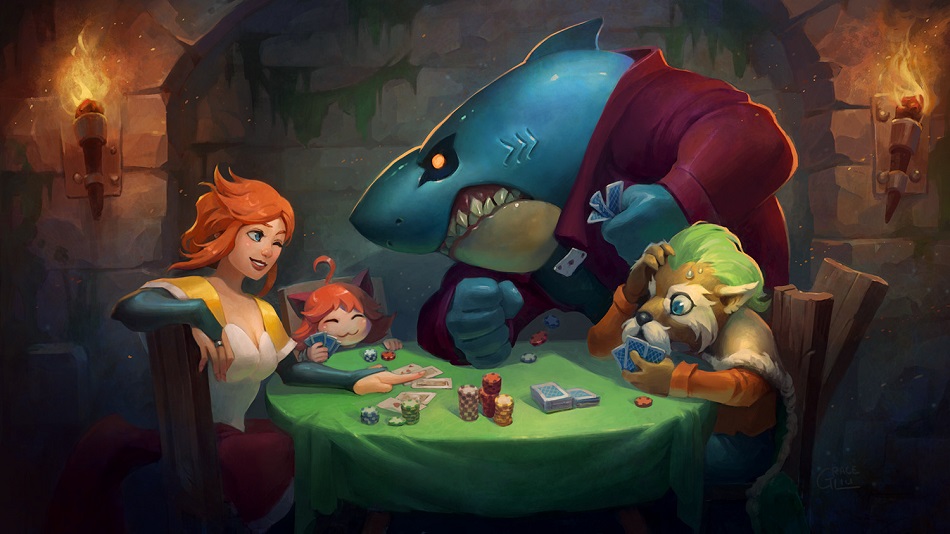 LOW Catching pets is a drag, some difficulty spikes.

WTF I would have sworn it was ‘Veggiemancer’.

It’s a bit of a running joke on the So Videogames podcast that if I’m playing anything on the Switch, it’s probably a 2D roguelike. There are a surprising amount of them to sift through on Nintendo’s handheld, but there are few standouts. However, to that short list of notables, we can now add one more — Tangledeep was Kickstarted by Impact Gameworks, and they’ve done a great job bringing it to fruition.

Story is not a big focus here, as it isn’t in most roguelikes, but it starts well enough. The player creates a character and then finds themselves in some kind of underground land where people who have magical aptitude are also mixed with animal DNA. The player must get through a number of randomly-generated dungeons while trying to reach whatever lies above, and along the way they’ll come across a number of surprises and interesting events.

Frankly though, I expect most players will push this premise comfortably to the mental backseat soon after starting. It’s not bad, but the real meat is in the gameplay. 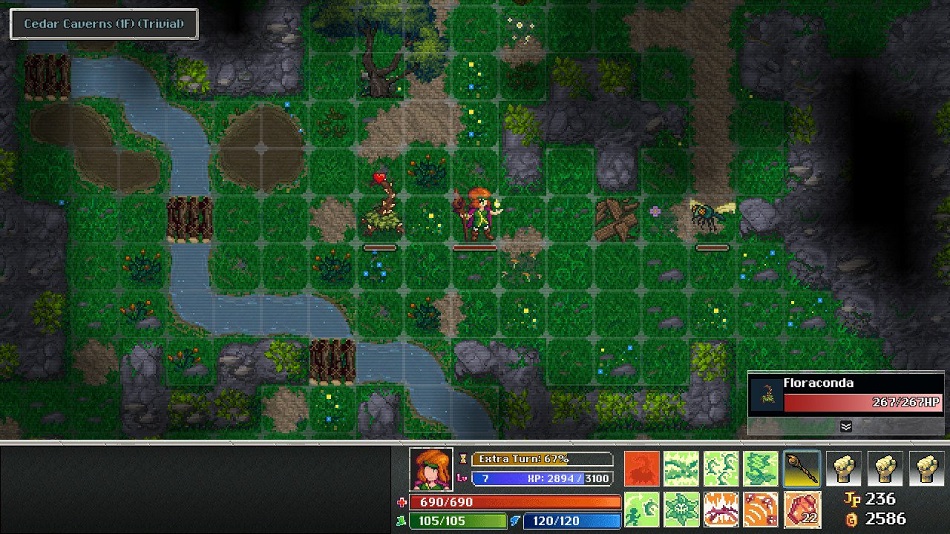 In traditional roguelike style, Tangledeep is a 2D title shown from a top-down-ish perspective and everything happens in turn-based fashion. Nothing moves or acts until the player does, so there’s plenty of time to strategize and evaluate every situation. Once in a dungeon, wandering monsters and various treasures will be found, and the player must make the most of their resources and abilities to survive and climb higher.

Going by the description I just gave, Tangledeep could be any one of a thousand games. However, in a roguelike the attention to detail is key, and it’s here that the developers strut their stuff.

From just the first few moments of play, it impresses through a wide variety of 9 selectable character classes, including types like the Brigand, Soulkeeper, Sword Dancer, and more. Some are better up close, some keep enemies at a distance, some have magical abilities — there’s something for players of any stripe. There are even three classes locked away for later once the player’s found their feet, so in a genre where keeping things fresh from run to run is important, this variety at the foundation of the experience goes a long way. The rest of the systems are just as detailed, and there are many systems here.

For example, there’s a neat twist where players can earn extra turns, there are a variety of foods and recipes that can award various benefits, there’s a system of capturing enemy monsters and raising them to be companions, it’s possible to go inside weapons and increase their abilities, there’s a small farm, and also a town that has features which can be unlocked over time, and who knows what else might unlock further down the road? There’s lots to dig into here and the dev time was time well-spent — plenty of titles can manage decent melee, but the ancillary work is what makes or breaks a roguelike, and Tangledeep goes above and beyond. 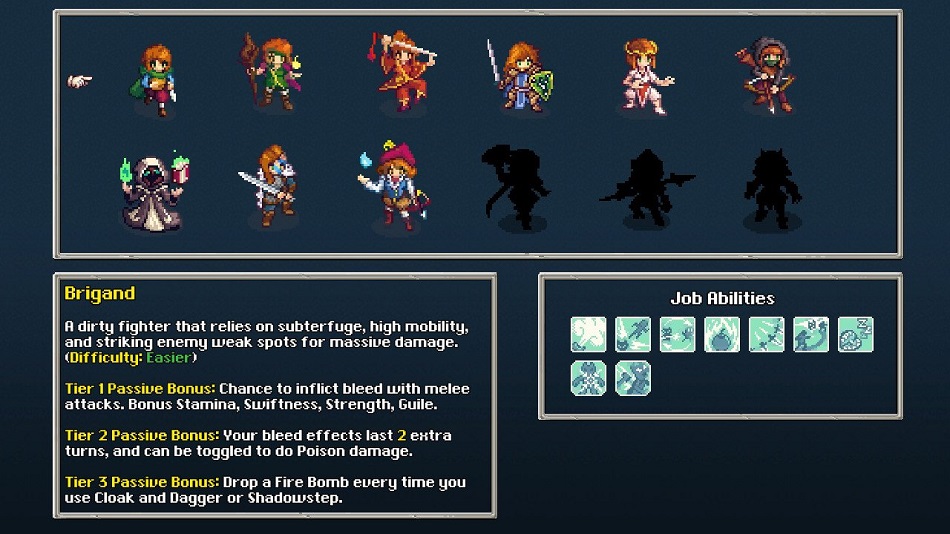 This care and detail also extends to some of the meta-elements of the game. For instance, there are three difficulty levels. When defeated in battle, the first lets players revive with half of their resources gone, the second kills a character permanently but keeps the progress and items unlocked in town, and the third is hardcore — it literally erases a player’s entire save. In addition, there are a number of toggles that players can turn on or off to adjust the experience even further to their taste beyond basic difficulty — things like regenerating health outside of combat, enabling or disabling friendly fire, and deciding whether or not enemies drop gold.

Ironically, during my first attempt I turned all of the settings to the easiest possible levels because I’m used to roguelikes going over-the-top with difficulty, but I soon discovered that I was basically invincible. I went back and turned off a few things and tweaked a few more, and eventually found a middle-range that felt comfortable and offered a good balance between challenge and fairness. I absolutely appreciate (and adore!) that these options are offered, and more games would do well to follow this example. 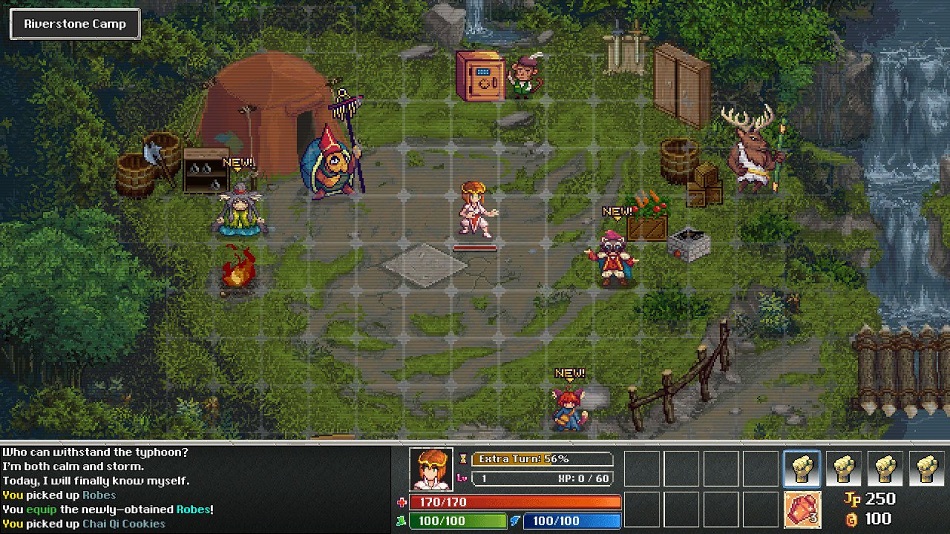 To be perfectly honest, I don’t think I’m anywhere near the end of Tangledeep. I’m taking my time leveling up my latest character (a Floramancer that comes with a living plant as a companion) I’m going back to town to unlock options, I’m increasing the power of my weapons, I’m feeding pets as often as possible — and there are still a bunch of classes I haven’t even tried yet!

I have absolutely no idea how long the campaign is or how long it might take to get through given how methodically I’m playing, but I’ve sunk a good number of hours into the adventure and enjoyed every minute. I haven’t rolled credits yet, but even so, I have no reservations recommending Tangledeep to people who might appreciate a masterfully-done roguelike. Rating: 8.5 out of 10

Disclosures: This game is developed and published by Impact Gameworks and is currently available on PC and Switch. This copy of the game was obtained via publisher and reviewed on theSwitch. Approximately 22 hours of play were devoted to the single-player mode over multiple characters, and the game was not completed. There are no multiplayer modes.

Parents: According to the ESRB, this game is rated E10+ and contains Fantasy Violence and Mild Blood. This game is totally safe. There’s no sex or salty language, and the violence is nothing more than random monsters getting whacked with swords in a non-graphic, tame way. It’s harmless.

Deaf & Hard of Hearing Gamers: I played the entire game muted and had no problems. All dialogue is subtitled and there are no audio cues necessary for gameplay. Text cannot be resized. It’s fully accessible. 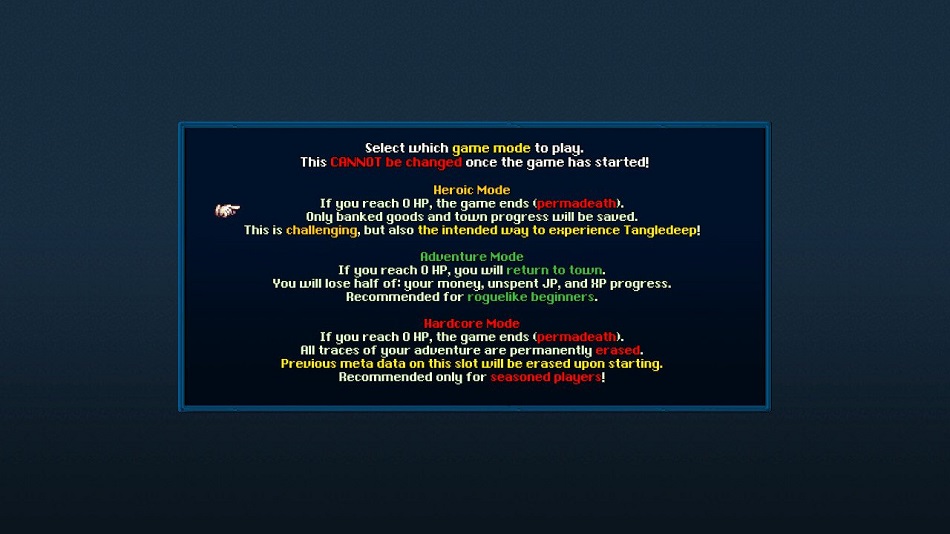 Remappable Controls: Strangely, for a game that offers so many customization options, the controls aren’t customizable. There is no control diagram. Luckily, things are pretty basic here — the left-side buttons or left stick moves, confirm/cancel are handled with the right-side buttons, the plus button goes to a menu and the R/L buttons toggle between menu pages. The game is also turn-based, so there’s no time pressure when playing.

Any fan of roguelike games will be ecstatic of Tangledeep.

It does remind me of Shiren The Wanderer: The Tower of Fortune and the Dice of Fate, which is also a nice roguelike RPG just like it.

Impact Gameworks must have discovered the recipe of a brilliant roguelike from Chunsoft and their Mystery Dungeon series.

It’s nice to have Tangledeep on Switch and be able to play it on the go.

And yeah, the review was nicely done.

Thanks for your comments and for reading! I’m actually a big Shiren fan, and would say that Tangledeep compares very favorably to it. If you like Shiren, you will guaranteed like this. ^_^