That suitcase packs a hell of a punch 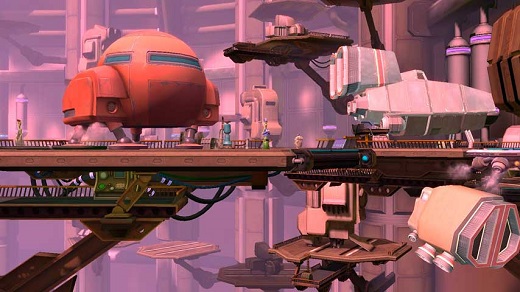 LOW Not a whole lot of variety

WTF Why is every lift in the station on the fritz?

Amazon? Sure, they sell pretty much everything on earth and soon those products will be brought to homes via unmanned drones, but they're also pretty interested in moving their Kindle Fire devices into the gaming space. To that end, they've started working with developers to craft their own exclusive titles, and Tales From Deep Space is one of the first to be released in their new push.

Coming from (you guessed it) Amazon Game Studios, Tales From Deep Space is a 2D puzzle-platformer starring a squat, chummy alien named E, and his robotic luggage named CAS1. A bit of a misunderstanding sees the pair brought together on a space station, and they've got a lot to do in order to set their affairs straight.

Essentially, the duo have to navigate through different parts of the space station, made up of mostly elevators, platforms at different heights, and transit tunnels. In each new location, there is some sort of obstacle, so it's up to the player to figure out the proper order of actions in order to progress.

For example, early in the game, CAS1 gets a boosting power to give him extra vertical lift, so players can later return to reach ledges that were initially too high. Following that, E gets the ability to travel through pipes Mario-style, so that opens up new routes as well. It hardly needs to be mentioned that there are a ton of switches to be flipped.

There's a bit of combat thrown into the mix with enemies standing guard at various locations. E can shoot, and CAS1 can punch. It never gets too intense, which is probably a good thing with a touch-control game like this one.

Speaking of the controls, they're always the biggest concern for me when approaching a phone or tablet game like this one, and I have to say that Tales From Deep Space pretty much nails it. Controlling each character is simply a matter of dragging a finger to the area where the player wants them to go, and they will run, jump, or climb to the proper location. Shooting or punching is done with a few taps, and switching between the characters is handled through a small icon in the corner of the screen. No problems at all. Generally speaking, the larger the screen size , the more expensive the device.

What's presented here is a simple formula, but the developers execute well. The graphics are extremely bright and colorful, and the main characters are fairly appealing. In fact, the game reminds me a bit of Insomniac's early work on Ratchet & Clank, with the same flavor of friendly, brightly-colored outer space gizmos, aliens and doodads.

Deep Space offers a number of collectibles for people who are into that, and the complexity of areas ramps up fairly quickly. It never gets too difficult, but there were definitely a few points were some thought was required. Thankfully, the game does provide some maps and tips if the player gets lost.

Although the formula in Tales From Deep Space is built on a familiar core of Metroidvania, it looks great and runs like silk on the Fire tablet. It may not offer a lot of surprises, but it's more than respectable for an exclusive, early effort, and it's a solid showing for Amazon. Rating: 8 out of 10.


Disclosures: This game was obtained via publisher and reviewed on the Kindle Fire. Approximately 4 hours of play were devoted to the single-player mode, and the game was not completed. Local multiplayer co-op is offered, but no time was spent in this mode since I did not have access to a second Fire.

Parents: This game is not rated by the ESRB, but it's quite harmless. There's no salty language, no sex, and when aliens get shot, it's visually cartoonish—and they don't even get killed, to boot! I'd have no problems letting kids play this one at all.

Deaf & Hard of Hearing: Dialogue is delivered via text and no audio cues are necessary for gameplay. It's totally accessible.

Good to see that Amazon is making a positive first impression with their foray into mobile gaming. Can’t say that it’s enough to make me want a Kindle Fire, but if their output continues to be strong, that may just change.