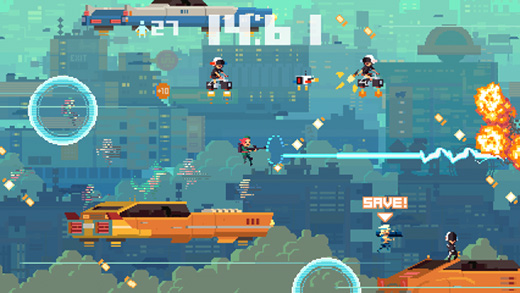 HIGH Grasping the nuances of rewinding to cut boss killtimes way down.

LOW Not being able to tell what the hell's happening on-screen.

WTF Are those… Poop babies?!?

Super TIME Force is the latest effort from super-solid developers Capy Games, and it comes as no surprise that it's a humdinger just like everything else they've done.

In this new project, the player takes control of a madcap group of super operatives, each with a unique weapon. Their 2D side-scrolling mission is to jump between various periods in history to do cool stuff while being stymied by a bad guy. Frankly, the plot itself isn't mindblowing, but it's worth noting that the developers work a thick amount of comedy into each period the team visits.

Including a Mad Max-like apocalyptic future, a prehistoric land where dinosaurs ride skateboards, and a quick trip to Atlantis before it sank, each level is full of small touches and general silliness that keep the mood light. It's refreshing to see a game place as much effort on the laughs as it does on the gameplay, and in this case that's saying something since the gameplay is pretty fab.

While Super TIME Force initially seems like a standard run-and-gun shooter, it quickly reveals that it's got a lot more going on under the hood. The hook is that players can rewind time at will, and when they die, they can choose a different operative. Since each character has a different weapon and attack power, approaching levels takes on a strategic feeling—at every sticking point, there's usually at least one particular character who is "more" right for the job. That in itself is a neat twist, but there's more.

It gets a little complicated, so stay with me…

When a player rewinds time, the game ‘remembers' the previous actions and characters that came before. For example, if the player chooses RPG-toting Jeff Leppard and perches him on a ledge to snipe before getting killed, they can then rewind the game and choose Dolphin Lundgren (yes he's a dolphin) instead. On this second attempt, the player will control Dolph to try a different approach, but Jeff's ‘ghost' is still on that ledge replaying his past actions.

Basically, every time the player rewinds time, a new ‘ghost' is created, and each one remains on-screen when time restarts. With just a few rewinds, it's easy to accumulate five, ten, or even more characters that are all unloading into whatever boss or area was too tough to do solo.

If that explanation sounds a little confusing, don't worry—it's somewhat confusing in the game as well. I didn't fully grasp its significance until after I had been playing for a little while, but once it clicked, I appreciated just how much depth was baked into Super TIME Force. This complexity is a typical example of the care and attention Capy spends on developing their titles—not only is the system interesting and unique, it brings a brand-new spin to what could have easily been another forgettable title, otherwise.

Between the chrono-strategy and the humor, Super TIME Force is a joy for both the hands and the funny bone. In fact, my only problem with it is that after several successive rewinds, the screen can become too cluttered, making it difficult to see exactly what's going on. Since a player only has a limited number of rewinds, it can be irritating to jump back in time to try something again, only to be immediately taken out by some tiny bullet or random enemy that was impossible to discern on-screen.

That's a pretty small complaint, though, and one which is alleviated by applying more skill and cerebral examination of each situation. The action is the very definition of hectic at times, but it's never brainless. Any way it's sliced, Super TIME Force is an excellent effort from an excellent developer, and a bullet-rich, chuckle-worthy feather in Capy's cap. Well done. Rating: 8.5 out of 10.


Disclosures: This game was obtained via publisher and reviewed on the Xbox 360. Approximately 12 hours of play were devoted to the single-player mode, and the game was completed. There are no multiplayer modes.

Parents: According to the ESRB, this game contains: violence, blood, partial nudity, mild language, and crude humor. Frankly, the warnings make STF sound way more risqué than it actually is. Hyper-cartoony characters shoot hyper-cartoony bad guys, one character apparently fires gas from his rear end, and the language is quite mild. I had no problems letting my kids play and watch with me, and I'd say it's just fine for most.

Deaf & Hard of Hearing Gamers: No audio cues are necessary for gameplay – all the action's on-screen and easily accessed through visuals alone. No problems at all.