So Tasty He Doesn't Need Gravy 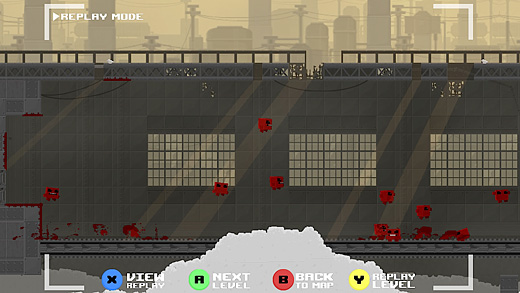 HIGH The hidden warp zone nods to past eras of gaming.

LOW The incredibly stiff difficulty will put off some players.

WTF Beware—anyone who can 100% this game may not actually be human.

A demanding 2D platformer giving no quarter, even the best players will find Super Meat Boy to be an extremely stiff challenge. Casual gamers, people with slow reflexes, or those with a low tolerance for frustration need not apply. For the select few who don't shy away from hundreds of restarts and have no problem spending half an hour trying to nail one jump, it will be a wonderfully polished, rigorously exhilarating experience.

The premise of Super Meat Boy is that the titular cube of bloody meat has had his girlfriend (a bandage, naturally) kidnapped. It's up to him to rescue blah blah blah, and you can guess the rest. Unsurprisingly, story doesn't play much of a role here. In this particular case, that can certainly be forgiven since the gameplay is dialed-in and absolutely on track.

In crafting a 2D platformer, the smartest thing that a developer can do is to make sure that the controls are flawless. In Super Meat Boy, they are. If the handling were anything less than perfect, the sadistic levels full of caustic salt, spinning saw blades and heat-seeking missiles would be completely unplayable. However, Team Meat has done their homework, and they know exactly what they're doing.

Making Meat Boy leap from platform to platform certainly isn't easy—in some levels, success is measured by micro-twitches of a muscle, or the width of half a pixel. However, as long as the player is up to the task, so is the game. There are no fatal drops or unintended impalings because the engine hiccupped or a landing bobbled. After a certain number of deaths, the proper movement and inertia becomes nearly second nature, and things that previously seemed absolutely impossible become possible… or, at least less impossible. Moments like that are pure joy.

Super Meat Boy will push a player to their limits, but while doing so, it will also make them smile. Team Meat has a sense of humor that's on full display, and there are numerous small touches that let players know the dev team is winking. For example, a trail of blood is left everywhere that Meat Boy walks (or explodes.) Areas that start off grey and drab soon become covered in meaningful splotches. There are also several hidden "warp zones" that pay homage to earlier generations of hardware. Seeing the game translated into something that looks like it's running on the Game Boy was priceless.

An unexpected plus that sweetens the deal, several bonus characters make guest appearances from other indie titles. More than palette swaps, each offers its own twist to the gameplay. Captain Video (from Bit.Trip Runner) can float for an extended period, Gish (from the game of the same name) adheres to walls, and Ogmo (from Jumper) sports a double-jump—a priceless ability in certain situations. A virtual who's who of indie stars, anyone who dabbles in smaller games will be delighted here.

While it may feel painful, grueling, and even outright sadistic at times, there's no denying the skill and craftsmanship that went into Super Meat Boy. It is exactly what it wants to be, so the only question is whether or not the player is up to the challenge—and if you are, then take on the game's Dark World… it's harder.

My own personal playthrough went through several ups and downs, and though there were plenty of times when my blood pressure was elevated and the profanity from my lips was flowing like a river in flood, I have to say that Team Meat's brand of tough love was something that I just couldn't quit. Those 1542 deaths? So worth it. Rating: 8.5 out of 10.

Disclosures: This game was obtained via publisher and reviewed on the Xbox 360. Approximately 7.5 hours of play were devoted to the single-player mode, and the game was completed. There are no multiplayer modes.

Parents: According to the ESRB, this game contains animated blood, cartoon violence, crude humor and language. In case the body of the review wasn't clear enough, this game is incredibly hard and will likely be far above the abilities of most children. That aside, the main character dies in several different ways, almost all of them leaving a bloody splotch and quite a mess. It's not the most graphic thing I've ever seen, but I'm not sure that it's appropriate for children. Leave this for the older ones.

Deaf & Hard of Hearing: You won't have any problems. There is no spoken dialogue, and all important information is either portrayed through pictures or text. There are no significant auditory cues during gameplay. Everything a player needs is on the screen, so consider this title completely accessible.

A game still based around making the player fail. When can we bury this anachronistic error?

Actually, using X for run and A for jump brings me back nice memories… Didn’t you play old school Super Mario games for Super Nintendo? The buttons configuration was exactly like that, and although it took some practice, it was not too difficult to master that technique…

You can also hold RT for run. Can’t imagine playing the game otherwise.

You can’t run all the time. You will never be able to beat the game like I did.

I piled up 707 deaths just in the demo. Last demo level was very tough already.
Only thing i don’t like so far: holding the run button all the time. X for running is awkward when i have to use A so often, and running all the time seems best, so the Trigger are my only alternative, but why no run toggle switch? I want to run always!

Thought about getting this or N+ or Splosion Man, but after the demos this seems the most fun.