They can't all be amazing 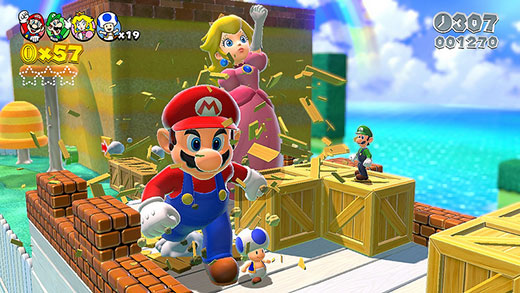 HIGH Working with my oldest son to collect stars.

LOW Falling to my death in a tough area because the camera couldn't keep up.

WTF Am I really supposed to go ga-ga over this cat suit?

The problem with being great is that the next thing has to be even better.  Either that, or you change gears and do something entirely different.  Whether a writer, a rock star, or an actor, even the most creative people in the world can't keep topping themselves doing the same thing year after year, and there inevitably comes a point at which they begin to coast while resting on their past successes.

is a game which rests on Nintendo's past successes.

Of course, that's not to say it's bad — any developer would kill to have the string of hits that this jolly plumber has enjoyed over the years, and I'm hard-pressed to think of a core title that was awful except Sunshine. That said, being not-awful isn't quite the same thing as being great. Nintendo has been leaning too heavily on the Mario tentpole for a while, and 3D World feels like an entry relying on nostalgia and good feeling for the franchise rather than innovation or creativity. The hooks for this iteration are apparently multiplayer and a new cat suit power-up.  That's not a lot to base a game on, and it shows.

Although I'm not a person who generally enjoys multiplayer, I do appreciate a good cooperative campaign mode, and it's obvious that Super Mario 3D World has been designed from the ground up to be as multiplayer-friendly as possible.  I went through the entire game with at least two people, and had several sessions with three and four players.  After rolling credits, I failed to see any place where having more than one player significantly improved the experience.  At best it was redundant, and at worst it was frustrating, chaotic, and counterproductive.

In general I think it's tough to coordinate platform jumping when multiple people are involved, and 3D World's take is especially maddening since it's easy to accidentally pick another player up, or to unintentionally bounce (or be bounced) off their head while jumping. It throws everyone off, and it happens often with two players.  With more than two, it's incessant. I hated these control interruptions, and wished that there were some way to turn off the ability or alter it, especially with buttons going unused on both the WiiU gamepad and the classic controller. It's obvious that combining grab/run functions was a concession to anyone using a last-gen Wiimote, and it's a poor choice.

The power-ups in the game weren't as problematic, but they did come off on the creatively-bankrupt side.  The cat suit featured in all the game's the advertising wasn't especially useful, serving mostly as a means to climb walls.  Naturally, this meant that the developers hid collectibles in high places, which is not an interesting use case. There are a few other one-offs like the cannon-head and the flashlight-head, but neither was much better, and they only appear a small number of times. The other notable power-up was the duplication cherry which creates clones of whichever character grabs it. It's a laugh initially, but it's tough to control more than one character at once, and the idea of herding them onto pads which require multiple characters for activation seems like it was swiped from a lesser title.

As for the rest of 3D World, there isn't much to talk about.  The lands are semi-themed again (desert, lava, etc.) and very few of the individual levels are inspired or memorable. In fact, I'm trying to think of a standout section to praise as I write this, and I'm coming up with absolutely nothing – it's all a blur of typicality. The bosses were just as dull as the levels. Not only were most of them complete pushovers, it was disappointing to see them repeated multiple times throughout the campaign.

Despite my criticisms, Super Mario 3D World still manages to deliver the electronic equivalent of comfort food.  It may not be particularly fresh or daring, but it checks off enough of the necessary boxes and certainly carries enough of the Mario charm. I mean, who doesn't like Mario? That said, it very much feels like a title that's phoning it in while counting on players to remember how great the other entries have been.  It's got all the favorite characters!  The colors are bright and the music's familiar! Collect coins! Loads of mushrooms! Come on, it's more Mario! It's gotta be great, right? Right?!?

I'm sure some players will get a kick out of throwing each other into pits or causing chaos in a cat suit, but 3D World

stands squarely in the shadow of other, greater entries in the series.  I'll be happy to return to the franchise when a brighter light bulb goes off in the Nintendo development studio at some point in the future, but if the next few entries are as content to coast as this one, I won't feel bad about skipping them at all.  Rating: 6 out of 10

Parents: According to the ESRB, this game contains Mild Cartoon Violence.  Like every other game in this series, it's totally safe, kid-friendly, and fine for families.  The colors are bright, the action is cartooning, and parents who take issue with someone jumping on top of a turtle probably have bigger things to worry about than a video game.

Deaf & Hard of Hearing Gamers: No problems here.  What little dialog there is comes in the form of text, and there are no significant auditory cues necessary for gameplay.  It's totally accessible.

I had the same experience when playing this game and was pretty disappointed. It was okay, and nothing more.

What’s struck me the most, at about halfway through, is that, while I’m enjoying some of it (the graphics are very nice, and parts really activate my Nintendo nostalgia), it’s almost entirely more of Super Mario 3D Land. I really enjoyed 3D Land (especially the difficult second quest), and more of it is fun, but the repetition from Nintendo is starting to frustrate. Each of the games most worth playing on the WiiU is essentially a repeat of one of the handful of games I purchased a 3DS to play just last year: 3D World of 3D Land, Mario Kart… Read more »

My problem with Sunshine wasn’t that it was different, but that the camera and controls both needed work. Especially the camera. It was a fun idea to have the waterpack and such, but i just didn’t feel like the devs ironed it out to the level it needed to be at. If it had been more mechanically polished, I think I would have enjoyed it a great deal more.

I agree with the review for the most part, but I don’t think it was harsh enough. First of all, there is nothing uniquely “3-D” about this game in the way that 3-D Land can actually be played in 3-D. That wouldn’t be a substantial criticism to make, except I constantly felt like this game required the player to possess some kind of enlightened depth perception. There were so many times I could not tell where I was jumping, or the layout of certain areas, and just plunged to my death over the simplest of mistakes. These weren’t even tricky… Read more »

I have to disagree with you’re statement about sunshine. While most people like yourself believe that sunshine was an awful entry in the mario series, I found it to be both innovative and loads of fun. You even stated yourself that nintendo needs to try something new with that franchise and that’s exactly what they accomplished with sunshine, but many fans hated it. These same “fans” also seemed to despise windwaker which I enjoyed but that’s another topic entirely. I thought your overall review of 3d world was well written and unbiased, you just seem to be falling into the… Read more »