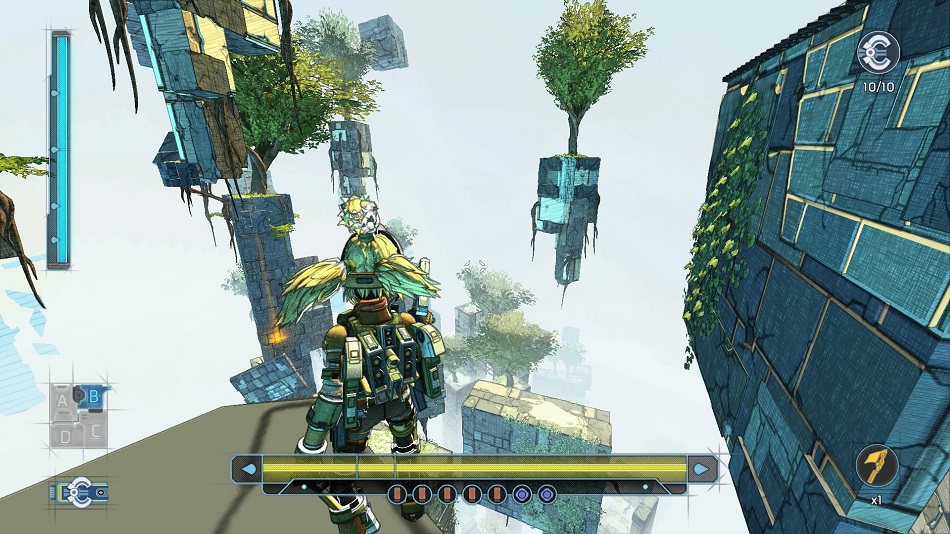 LOW Handles as sketchy as a squirrel smoking meth.

WTF I’m supposed to look where while I’m shooting up this wall?

Every once in a while, I come across a game that has a great ideas but fails to develop in a way that’s easily appreciable – something that feels as though the developers made it for themselves, and if someone else comes along for the ride, that’s fine too. I’m not a believer in focus-testing the soul out of a project, but there’s much to be said for communicating concepts clearly and welcoming people in. Considerations have to be made for those who haven’t practiced playing every day for months on end, and Super Cloudbuilt doesn’t feel like a very considerate game.

This indie effort from Coilworks stars a character named Demi, the veteran of some conflict that’s left her body comatose in a hospital bed. While her physical form is out of action, her mind is awake and processing her situation by… strapping on a rocketpack and platforming through abstract levels at near-lightspeed? Don’t think about it too much since the plot has nothing to do with gameplay, and it isn’t an effective tale anyway thanks to a lack of context and voicework that sounds like it was done by a person actually in a coma.

Putting story elements aside (as I’m guessing most will) Super Cloudbuilt features areas comprised of random bits of architecture floating in space with little discernible sense to be made of them. It sort of looks like random clusters of skyscrapers with large chunks missing or blown away, all hanging in the air with nothing below.

Each of these levels asks players to get to an exit at the end by using Demi’s rocketpack and mobility skills to run, wall-run, jump, dash, and scale vertical surfaces. She’s a cool-looking character and watching smooth runs on YouTube is incredibly impressive. Actually playing it? That’s something else.

The first thing that struck me about Super Cloudbuilt is how fast and slippery it feels. With just a nudge on the control stick, Demi shoots forward at a breakneck pace, not so much like she’s running, but more like she’s being shot down a greased track. It took a while for me to come to grips with her movement because her physics are their own thing, and they just don’t feel right.

She also has the strange quality of being as fast as lightning when moving forward, but being oddly sticky and sluggish when climbing walls or leaping from them. 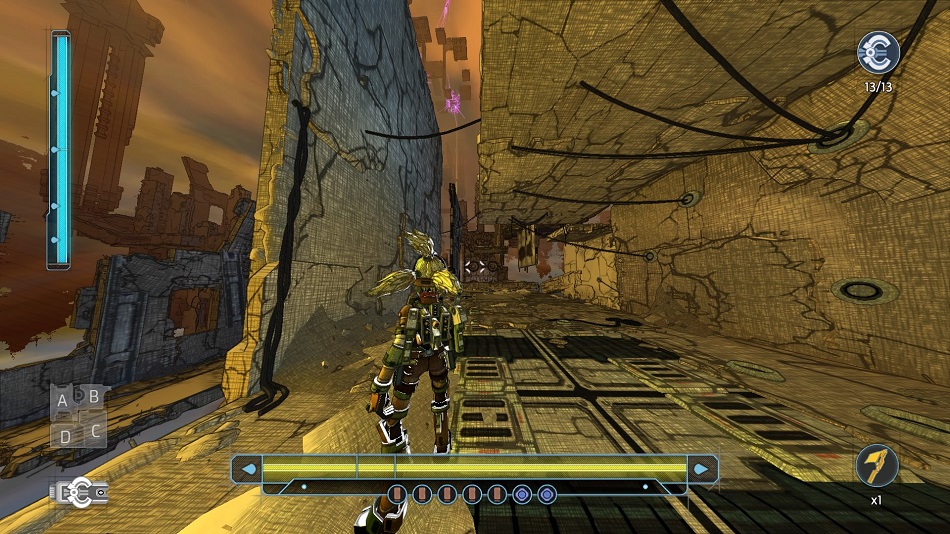 This idiosyncratic movement might have been fine if the levels were designed in a more linear, readable fashion, but they’re incredibly hard to parse. Not only is it hard to get a handle on navigation because the camera’s perspective has a semi-fisheye quality that intensifies as Demi picks up speed, but everything is hard to read in general. I had great difficulty in finding a line through each area, and would frequently have to stop and scan around trying to figure out where I was supposed to go.

This inability to instantly recognize a path feels counter-intuitive for a game which ostensibly wants players to move in a flowing, fast manner. Complicating things, the devs offer several visual filters, but none of them help clarify the level design, and some make it worse. The vaguely cel-shaded design isn’t clean enough, and the color schemes don’t offer enough contrast.

It’s also hard to ignore that game seems at war with itself on a key level — on one hand, Demi is built for speed and all directions point towards moving forward without pause.  On the other hand, the levels feel like jumbled garbage, and important pickups are hidden away unless players carefully hunt for them. Ordinarily I wouldn’t bother with collectibles, but they unlock powers which make Demi a better, more capable character. Not having them feels like missing out on a lot, but clumsily searching clusters of platforms feels at odds with what Super Cloudbuilt is trying to do.

I also have to mention the checkpoints — while there are a handful in each level, they’re too few and far between, and they’re only triggered if the player finds them. It was common for me to be traveling a line that was apparently not what the developer intended, meaning that I would often never see checkpoints at all.  As a way of compensating, it’s possible for a player to set a limited number of their own checkpoints, but these have to be found like items and the player has to remember to use them.

This system seems good in theory, but falling off a ledge can happen in the blink of an eye and there were many times when I made a small error, dropped to my death, and then got sent back a huge distance because I didn’t have any checkpoints to use, had forgotten to put one down, or chose not to use one because I didn’t anticipate trouble. After more than a few frustrating instances of taking a spill and being sent back much further than I cared to replay, I called it good.

I think Demi looks like a cool character and I like the idea of using a rocketpack to dash through platforms in a kinetic flow state, but Super Cloudbuilt is too frustrating and haphazard as an experience. I’m sure the people who made it (and a handful of YouTubers) are really, really good at it, but thanks to a lack of polish and elements that never fit together well, I couldn’t understand what it was trying to be. I’m not sure Coilworks knows either. Rating: 4 out of 10

Disclosures: This game is developed by Coilworks and published by Double Eleven. It is currently available on PC, PS4 and XBO. This copy of the game was obtained via publisher and reviewed on the PS4. Approximately 5 hours of play were devoted to the single-player mode, and the game was not completed. There are no multiplayer modes.

Parents: According to the ESRB, this game is rated T and contains Violence and Language. The violence is Demi shooting some simple robot drones or falling to her death. I don’t recall any salty language. It’s hard as hell but it’s not risqué material.

Deaf & Hard of Hearing Gamers: The spoken dialogue is subtitled and there are no significant audio cues. It’s fully accessible.

Nothing personal towards the editor and creator the article nor their experience as a gamer since the good ol’ Atari era but this is a horrible review and the critic failed to get out of themselves to write this review. Realizing that “Super CloudBuilt” was just not their cup of tea and admitting because of that, are not qualified to comment negatively or positively. Brad, Being an older person, I urge you to apply some self awarness and determine if you are leaning towards the bad habits of our day. The want for much, with little to no effort put… Read more »

Hey Jason, Nothing personal towards the editor and creator the article nor their experience as a gamer since the good ol’ Atari era but this is a horrible review and the critic failed to get out of themselves to write this review. Realizing that “Super CloudBuilt” was just not their cup of tea and admitting because of that, are not qualified to comment negatively or positively. I would challenge you on the notion that someone has to find a game that’s their cup of tea before they’re qualified to comment on it. Reviews written by people who are already inclined… Read more »

Brad, Appreciate the reply. First – If you are going challenge a notion of purchasing & reviewing of a specific genre of games, I encourage you to provide insight and facts that may have attracted you to the purchase. If you were just going to comment on it, than this is obviously not a review, and therefore should not be called one. You provide your own experience, which is great but lacks to challenge the notion; and a battle not shown up to, is a battle lost. Perhaps provide whether you read something that made you believe this was another… Read more »

Jason, the level of condescension and pretension in your comment is off the charts. Really, I applaud you, as this must have taken a good deal of work. There’s nothing for me to say in response here, but I’m publishing it as an example of the kind of nonsense games writers have to suffer on a daily basis, although I fully admit you’ve gone further than most. This post was really Something Else.

Appreciate the compliments and happy we can agree to disagree.

Good day to you as well and happy hunting.

Brad, Let me start with by saying that I have to apologize, to you, for some of those comments. Just as you have provided in your last response, I would like to offer more constructive criticism, taking into account your entire review and correspondences. I did get defensive and I humbly apologize to you. As a critic, you take the time and effort to publish reviews, spend the money and played the game. Without reviews including yours, there would be nothing of value to offer individuals who are on the fence about the purchase of a specific game nor anything… Read more »

>>Let me start with by saying that I have to apologize, to you, for some of those comments. Thanks for taking the time to follow up, I appreciate it. >>You are inflicting potential harm to the developers and their livelihood when you don’t attempt to factor yourself out of the equation and give a thorough and unbiased review. I am encouraging you to include your own experiences but attempt to include and see beyond your own experience. We can’t assume those “YouTubers” who you referenced were a form of elite class of gamers can we? The way a game review… Read more »

So I guess this is the sequel to Cloudbuilt but it looks exactly the same with the same character, the same “story” and the same fundamental problems?
I played Cloudbuilt and I enjoyed some levels and hated others. Specifically, some leves were filled with enemies that slowed the flow of the game to a halt and also were super cheap. Other levels, like you said, were more like mazes than parkour areas; a fact that would’ve not been so bad if it not were for the ticking clock and the limited powerups that didn’t encourage exploration.

i was not aware of Cloudbuilt before on PC, but apparently it’s an enhanced version and not a sequel, if that helps. So yeah, same basic game, same basic problems.