My oldest son's summer vacation is over soon, just a couple of days left, but he managed to finish a few games while he was here.

The first was Driver: San Francisco, and he enjoyed it just as much as I did… in fact, probably more.

He seemed to have a much easier time with the final boss than I did, too. Young person reflexes, perhaps?

The second game he finished was Street Fighter X Tekken. Although it's not really a traditional game that you can "finish" in the sense that you've completed all quests or rescued the people in need, we went through the game with all available story-based pairs, so I'm calling that done.

The most recent game he finished, and probably the final one of the summer, was Skyrim. In this case, he completed the main quest line, so I'm counting that as done. Of course, there are still 38,000,000 quests left in the game, but does anybody really finish all of them? I mean, anybody who's not in a locked-down, supervised facility?

I'm pretty proud since this was the first real role-playing game (RPG) he's played, and there was a bit of a learning curve. He spends most of his time with driving games and iOS grindfests when he's at his mom's house, so this was a big departure for him.

If you listened to the most recent GameCritics podcast, then you'll know that I re-started the game so that I could play alongside him, and I just wrapped up the main quest myself tonight.

Although I was fairly bullish on the Dawnguard DLC, actually defeating evil dragon Alduin and restoring peace to the land of Skyrim was a boring, poorly-written, poorly-conceived mission. Not only did Alduin have no real personality nor present any real threat since he was mostly absent for the game’s running time, there was too much filler and not enough drama—the same issues that plague the game, overall.

While I'm talking about it, special jeers go out to the final battle. I was only level 15 (mostly a destruction mage) and "The World-Eater" went down like a complete chump with a battle (if you can even call it that) even less memorable than some of the earlier dragons, and fighting dragons in Skyrim is about as tough as beating up on aggressive seagulls at the beach—it may be a little annoying, but you’re never really in any serious danger.

After spending so much time with my iPhone lately (why did I buy a Vita again?) I decided that I should probably start reviewing iOS games more frequently. I'm still mulling over what sort of format I should use, or exactly how I should structure it since so many of them are simple in nature and not designed to adhere to traditional console standards, though.

If any of you reading this have any requests or specific things you'd like to see in relation to how iOS games are reviewed, please drop me a line here at the blog, via email or on Twitter. Any feedback is welcome.

In the meantime, here are some quick thoughts on three games I've played lately: 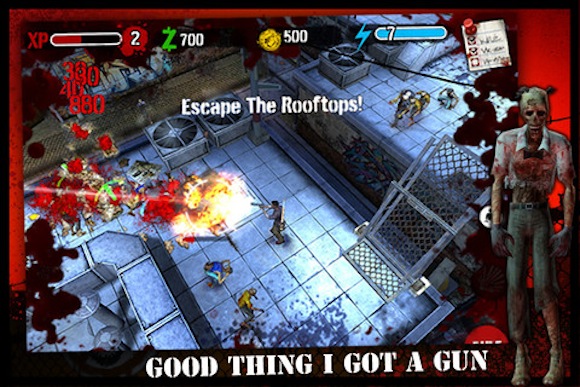 Although this is one of the better games I've seen lately, it's also plagued with a number of serious problems.

The premise is that the player has a hideout on the roof of a building, and is contacted via radio to perform specific missions in different places across the city—things like rebuilding barricades, escorting survivors, and scavenging for goods. It's a great concept that lends itself well to playing on the go since missions are quite short and small in scope.

After successful completion of a mission, the player returns to the rooftop and can perform various actions like buying furniture for the hideout, buying/equipping different armor and weapons, exchanging survivors for cash payouts, and so forth. There's a nice sense of progression and permanence as goods are accumulated, and it controls quite well for a faux D-pad type of game thanks to the excellent auto-targeting and simplified actions.

While all of this sounds like a win so far (and really, it is) it's held back by a couple of different things that absolutely kill the experience.

The first issue is a huge one—since the game is free to download, the developers have instituted one of those pay-to-avoid-waiting schemes where players can spend real money in order to speed up gameplay. For those who don't want to pay, the character has a "cool down" period where missions can't be accepted for a brief time. It wasn't a big deal at first. In fact, I initially thought it was kind of neat since it gave the game a slight veneer of realism… the idea that your character had to rest up and wait for further instructions from his intelligence network was fine by me.

However, after stepping away from the game and then coming back to it, I discovered that there's a game-breaking bug in the clock. Every time I shut the program and then reopen it, several hundred minutes are added to the time I have to wait before accepting new missions. At the moment, the clock is telling me I can’t play again for 796 minutes! Until a patch is released, I can't make further progress in the game since more time is added every time I come back to see if it's working again.

Apart from that bug, the game uses two different currencies for items, and of course, the best stuff is bought with the rarer form of currency. Although I've heard from players who don't have the time bug that it's possible to farm "the good money" in certain missions, the developers are obviously hoping that players will save all the hassle and just get the primo bucks by buying it with real cash.

This kind of strategy backfires with me, to be honest. I have no problem at all chipping in some extra money for games that deliver a great experience and respect me as a player, but when I'm getting nickel-and-dimed from the start, I'm far less inclined to open my wallet.

I can’t fully review the game since it's literally unplayable in its current buggy state, but what little I've seen shows much promise. The general design felt like a good fit for the iPhone and the graphics and controls were thumbs-up, too. I'd have no problem paying couple of dollars outright for something of this quality, so it's a shame that it went the route of free/IAP-whoring.

I'll come back to it after it’s patched and see how much of the game can be completed without paying any extra money, but I hope that the developers will take a different route next time—if they keep turning out products of this general quality (apart from the bug) they’ll certainly be at the top of the charts, I think.

At this point, Not Recommended. 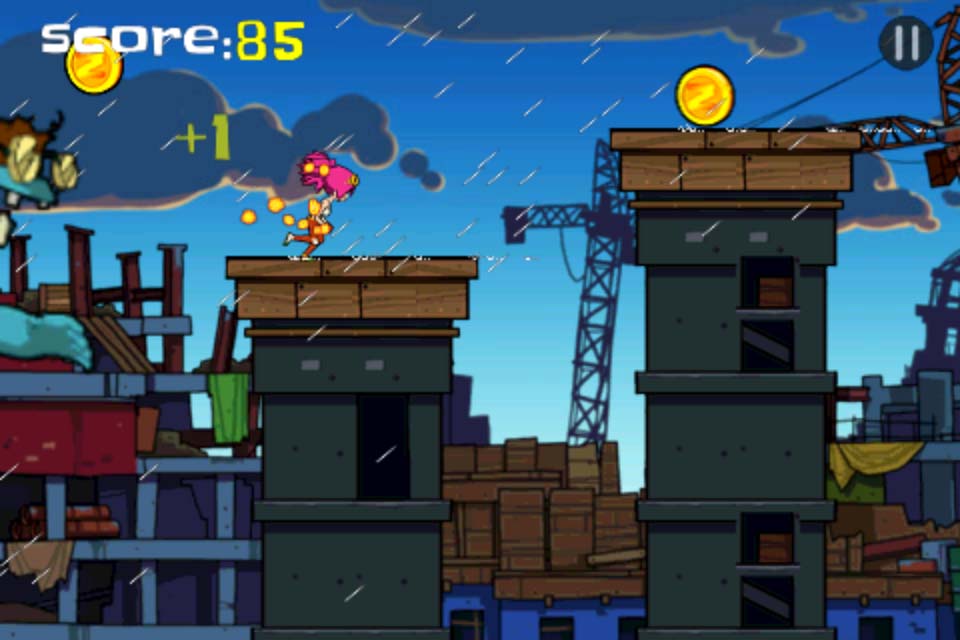 Continuing the zombie theme, Zombie Parkour Runner puts the player in control of a super-cool female parkour athlete who radiates can-do girl power and avoids the busty/sexy stereotype. There’s a bit of a story to be pieced together by collecting objects which can be viewed inside her room (accessed through the main menu) but the real draw here is the fast-paced platforming.

The developers have done a great job of giving the main character a satisfying amount of moves like wall-running, vaulting, and grabbing onto pipes, yet it's all controlled by a single fingertip pushing on the screen. She runs at a constant pace, so it's up to the player to tap at the right time and get her from point A to point B while an undead giant is chasing her through a city.

The first three worlds are fairly tame, but the fourth world (available via IAP) gets pretty intense and will likely have even experienced players trying certain sections over and over again just to make it to the end. Collecting all of the story items is even more challenging.

Zombie Parkour Runner looks good, controls great, and offers a solid play formula that was entertaining enough to keep me playing all the way until the end, and on iOS, that's a fairly uncommon thing. 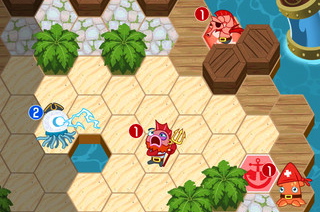 Outwitters is a turn-based, hex-based strategy game that is played asynchronously with other live people. (vs the AI is not an option.)

Ordinarily, I wouldn't spend time with something like this, but I am a strategy fan and the game seems to have no shortage of people to play against. On the first day, I had five games going at once, and there was very little downtime between turns.

Although the formula is simple, it's a proven one. There are three types of teams (only one is available initially, the other two are IAPs) and each one has a mix of light, medium, and heavy soldiers, each with their own attributes. The starting team is fish-based, so the heavy is a shark, the sniper is some sort of jellyfish, the scout is a sea horse, and so on. Each side is limited to five actions, so moves must be carefully considered and larger strategies have to play out over several turns.

I was initially going to give this one a thumbs up, but the servers crashed and I ended up losing all of my games for three days in a row. They finally came back today, but I wasn't able to complete them on my own—apparently they somehow auto-completed, or my opponents somehow completed them in my absence.

The game isn't exciting enough for me to put up with irregular performance like this, and the UI needs a little work—I have no idea how to dismiss the completed games that are cluttering up my home screen, for example. Also, it's a little disappointing that solo play isn’t possible, and that only one group of soldiers is available without purchase.

It seems like a bit of a work in progress so far, and I see a lot of potential here. If some of the issues are ironed out, I would be happy to recommend it, but it feels a bit too uneven in its current state.