Yes, you read that right 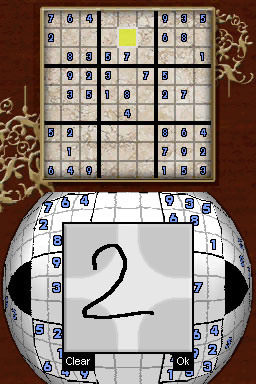 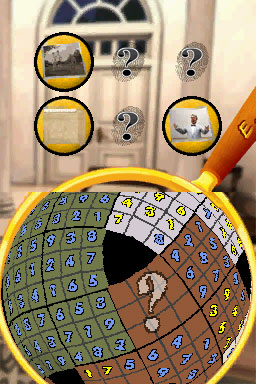 WTF Why put "Detective" in the title when it's barely in the game?

As a game critic, receiving unsolicited packages in the mail is always a little like getting a Christmas present from a relative you haven't seen since you were a kid. It might be awesome… or it might be a yellow cable-knit sweater three sizes too big. Case in point: Sudoku Ball Detective.

Upon opening the package, my "WTF?" sentiment was literally audible. I stood there for a few moments, almost paralyzed by confusion with the game in front of me. Sudoku—not really my thing. Detectives, maybe. Ball? Hmm… Putting my critical reasoning skills to the test, I did the only thing I really could do.

I gave it to my wife.

"Hey honey, I just got a new game in the mail, and I'm pretty sure you're the target audience."

Her DS was empty at the time, so she happily went to work. I let her go about it, resumed playing Demon's Souls and checked in with her an hour or so later.

"I'm just playing Sudoku." Was her reply, stylus in hand, eyes focused intently at the screen.

"But what about the detective part? Isn't there a story?"

Although she's not usually one to underestimate, I couldn't help but think there had to be more to this. I put the screws to her.

"So, there's no story at all? I mean, there's got to be something more to it, right?"

The upper screen of her DS snapped shut.

"Story? Not really. You're basically doing Sudoku. It's kind of neat that the puzzles are laid out on a ball and you have to roll it around to get to different puzzles, but it has nothing to do with the story. You solve some boards and every once in a while a cut-scene comes up, but it doesn't mean anything. It literally has no effect on the game."

I found this to be a bit odd, but it wouldn't be the first time one of these casual games tacked-on a "story" to give the appearance of a twist, only to pay it the most cursory lipservice in practice. The recent rash of hidden-object puzzles like Mystery Case Files or Cate West were perfect examples, so having this same phenomenon translate to Sudoku wasn't much of a jump.

I raised an eyebrow. "Well, what about the Sudoku itself? Is it well-done?"

She continued playing. "It's nothing special. It's Sudoku. It's actually a little irritating though, because you can't put guess-numbers in the corners of the boxes, so you can't write anything unless you're sure. Brain Age did it better."

There was Sudoku in Brain Age? All I remembered was some fast-paced math and drawing squiggly versions of dogs and fire trucks.

Leaving the wife to her work, I moved on to other things and didn't ask her any more questions until the next night. Laying next to her in bed, she closed the DS an hour earlier than she usually did.

Looking over, I asked "Tired of it?"

She plugged in the handheld's power cord. "Finished it."

"Yep." She began rummaging around on her nightstand, cracking open a fresh copy of Professor Layton and the Diabolical Box.  "I really like the music in Layton."

I smiled, knowing she's a sucker for French-ish things. "So, if five is a perfectly average game— not terrible, not special—what would you give Sudoku Ball Detective?"

"Four. It was pretty short, I forgot it had a story, and the interface needs some work. It wasn't bad, though. It was just Sudoku."

Snuggling in next to her, satisfied, I changed the channel on the TV and pulled the blankets up higher. "Hey, hon?"

Disclosures: This game was obtained via publisher and reviewed on the DS. Approximately six hours of play were devoted to the single-player mode, and the game was completed one time (by my wife.) There are no multiplayer modes.

Parents: According to the ESRB, this game contains mild violence and use of tobacco. Mild violence? A person was killed in a non-graphic way onscreen. Tobacco? Someone smokes. This is really, really mild stuff. If you child can figure out Sudoku, this'll be okay for ‘em.

Deaf & Hard of Hearing: You will have no issues. It's Sudoku… no audio necessary.