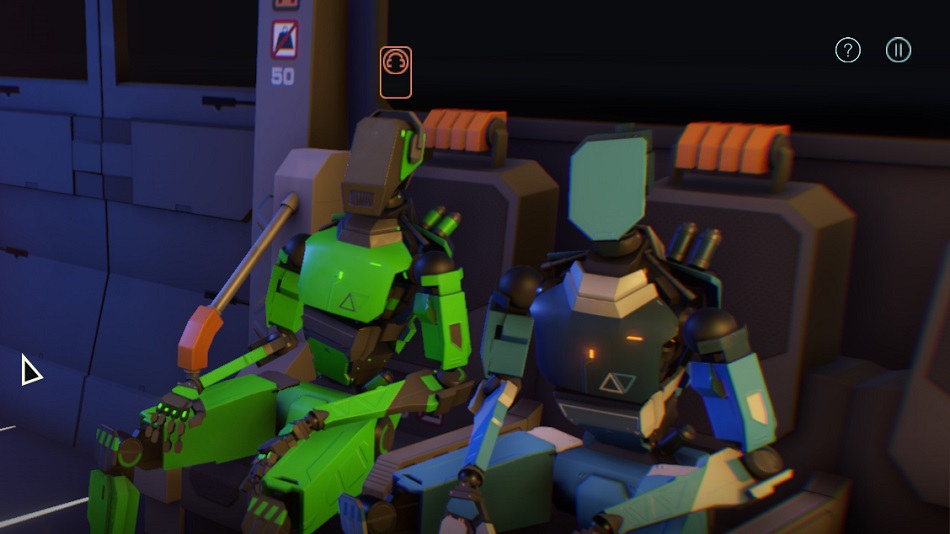 LOW The lover and its code.

WTF There’s at least one other obvious way to end this game, and it’s not here.

Subsurface Circular is the latest effort from developer Mike Bithell, the man best known for his charming indie hit Thomas Was Alone. That game was quite different from this one, and his previous work, Volume, was different again.If nothing else, no one can accuse Bithell of rehashing familiar ground, and that’s an admirable quality.

In this outing, the player takes the role of a robot detective riding an underground subway. While on his travels, he’s approached by another robot who’s just had a friend disappear. This new ‘bot wants his friend found, so the player is recruited to get to the bottom of the mystery.

When Subsurface boots up, it’s billed as a Bithell “short'”, and that’s an apt description. The entire experience is focused on the train-bound detective as it talks to other robots that get on and off — there are no other locations, there’s no inventory or combat, no platforming, or anything else. From start to finish, the detective stays seated and simply questions any other unit within chatting range. All told it’s around 90 minutes, or perhaps two hours.

Frankly, I’m a fan of this “short” concept — I love playing something that gets in, makes its point and then gets out. There’s no complaint from me about its brief and focused nature. Of course, if a game is only going to do one thing, then it had better do it well, and in this regard, Subsurface Circular largely, but not entirely, succeeds. 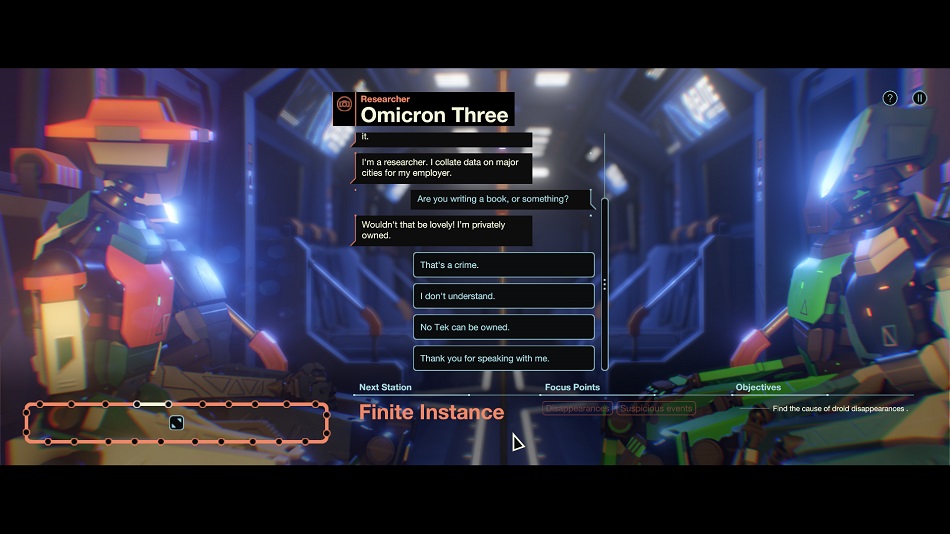 With just a few conversations, Bithell is able to paint a fairly effective portrait of a world where independent robots have taken over many of life’s functions — being nannies, assembly workers, priests, and more — along with all the good and bad that entails. The mystery of the vanished units was also compelling enough to keep my interest for the length of the game’s running time, as well. I do have a couple of minor complaints, however.

The first is that many of the dialogue options available seem to have a negative tone to them — maybe it’s how I read them, but they had a snarky, slightly rude tinge. While none of it was outright nasty or over the top, it felt like a slightly inappropriate tone to strike between robots chitchatting.

My other complaint is that when the game comes to its climax, it feels as though there should be more options than those which are provided to the player. Bithell is clearly trying to deliver A Big Choice, but there’s at least one other obvious thing that’s not present, so it feels as though the climax isn’t as logical or as weighty as it could be. Odd, since I’d assume robots are both logical, and, uh, heavy.

Despite those minor bumps, Bithell’s first experimental foray into doing a game “short” is a successful one. My time spent riding the rails with this robot detective was pleasant enough, and I have much respect for any game that respects my time. I’m up for another, sir. Rating: 7 out of 10

Disclosures: This game is developed and published by Bithell Games and is currently available on Switch, iOS and PC. This copy of the game was obtained via publisher and reviewed on the Switch. Approximately 2 hours of play were devoted to the single-player mode, and the game was completed. There are no multiplayer modes.

Parents: At the time this review was written, no rating information was available from the ESRB. However, I’d personally rate it as an E. There’s literally nothing in the game besides robots talking on a train, and there’s not even any salty language. Kids might find it dull, but there’s nothing of concern here.

Deaf & Hard of Hearing Gamers: No problems at all. All dialogue comes via text, and even the postgame developer commentary is text as well. No audio is necessary to play, i completed the game entirely on mute. It’s fully accessible.