Bullets In A Void 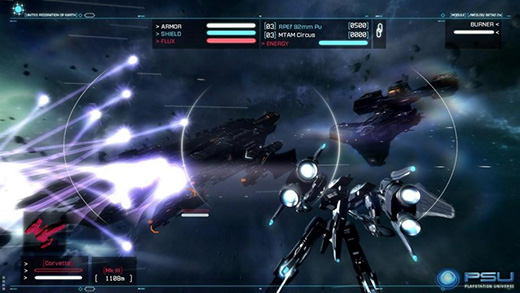 HIGH I'm always up for any vehicle that transforms.

LOW Struggling (and failing) to keep up with missiles hitting friendly ships.

It's been a long time since I've strapped into a title about shooting bogeys in space, but Born Ready Studios has ended my drought with Strike Suit Zero

. Featuring a nimble fighter that transforms into a robot, they had me on board before I ever laid eyes on it. Unfortunately, I soon discovered that it has one major problem—it's painfully boring.

The issue with Strike Suit Zero is that simply performing the act of shooting isn't a satisfying experience in and of itself. Any decent game of this sort needs supporting content and supplemental material to sell it since painting targets and lobbing missiles can only go so far. It does what it does fairly well, it just doesn't do enough.

Things start out on the right track. After a quick tutorial section, the player takes control of the eponymous ship and gets thrown into a story that has the beginnings of a nice interstellar conflict. The perfunctory tale soon falls by the wayside, but the mechanics are of good design.

While in ship configuration, it handles like any other aircraft or space fighting sim would. In robot mode, the ship's characteristics shift. Instead of continuing to fly, it starts moving with quick dash-like maneuvers, vaguely analogous to a gun turret holding a fixed point in space. While in this mode, the guns and missiles gain extra power but deplete quickly. Once the ammo runs dry, the robot converts back to spacecraft mode and recharges by taking down enemies.

What I've just described is a good, solid base to build on, but Strike Suit Zero doesn't do much past the shooting. There's no home base to go back to, there are no characters to interact with, there are no story choices to be made—there's almost nothing here besides the combat.

Speaking of the combat, the developers include far too much of it. I guess it makes sense since there's not much content otherwise, but things get intensely stale after a few missions. Worse, the levels go on and on for what feel like forever, and just when it seems like the final wave's been dealt with, here come three more. Every time. Finishing a well-designed level should bring positive feelings of accomplishment, not just relief that it's over.

has a solid core, it needs more development time and enrichment in nearly every aspect apart from the combat mechanics. Players looking for a megadose of space shooting will find it, but those craving a well-rounded package offering more than just dogfighting should look elsewhere. Rating: 4.5 out of 10.


Disclosures: This game was obtained via publisher and reviewed on the PS4. Approximately 4 hours of play were devoted to the single-player mode, and the game was not completed. There are no multiplayer modes.

Parents: According to the ESRB, this game contains: violence. Space ships shoot other space ships in space. There's no blood or graphic imagery, no salty language and no sexual content.

Deaf & Hard of Hearing: No problems here. The dialogue is subtitled and all pertinent info is displayed on-screen.