Oh, Hey. Didn't See You There. Were You Here the Whole Time? 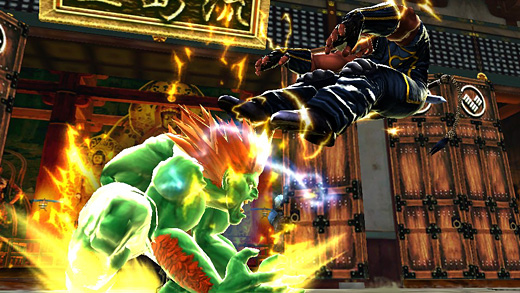 For the sake of transparency it should be noted that these new characters are not downloaded—they're already on the disc waiting to be unlocked. As such, each comes complete with their own opening and ending sequence just like the other characters do, and there are alternate colors and swap costumes for them to be purchased separately (boo!) in the online stores as well.

On the Tekken side, the new additions are:

Bryan Fury & Jack-X: Bryan has always been one of my favorite characters. His trademark "Fisherman's Hook" is present, and his arsenal of fast moves that pack a punch translate well. I think the artists have drawn him too hulking and thick, though. Visually, he reminds me a of Street Fighter III's Alex, and that's not quite right. Jack-X is a real bruiser. He's slow on the ground, but his extendable arms give him quite a reach and he's got maneuvers that can close distance in the blink of an eye. Pretty brutal!

Christie Monterio & Lei Wulong: Christie's capoeira fighting style is flashy and wild, and I almost think she's better here than she is in 3D since her moveset has been simplified. Lei has an utterly terrible voice actor for his character, and to be perfectly honest, he's never been someone I've enjoyed despite my appreciation of Kung Fu. Nice to see him, will probably never use him.

Alisa Bosconovitch & Lars Alexandersson: I had no idea who these characters were, so I hit the Tekken wiki. After finding out that they were prominently featured in Tekken 6 (an entry that I skipped) that explained it. If you ask me, these characters look like a couple of damned buffoons. Alisa's got a bizarre raver/streetwalker/mentally ill motif going, and Lars could pass for an also-ran from Dragon Ball Z. Whoever designed these people should have their head examined. In terms of how they play, Lars comes off as mostly worthless, although I admit that I wasn't trying very hard. He's just too damned unappealing. On the other hand, Alisa is a combat droid with thrusters, pop-out chainsaws, and an exploding head, so there's definite entertainment value there. 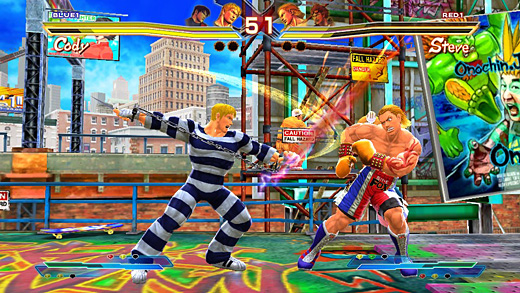 On the Street Fighter side, we have:

Elena & Dudley: The ultra-leggy Elena is a counterpart to Christie, as she uses a different style of capoeira. I'm a fan of her moveset, and her animations are sweeping and dramatic. I did feel as though there was a little too much emphasis on her crotch, though… her opening pose is rather in-your-face, and her post-match stance caught my attention immediately. Dudley (a.k.a. Balrog-with-mustache) is a pure boxer. His attacks are straightforward and he's easy to use, so I see him as a solid addition.

Blanka & Sakura: Out of all the new characters, Blanka is my favorite by far. I may be a bit biased, though… he's been my character of choice ever since Street Fighter II, so I've got a soft spot for the big green guy. That said, his interpretation here is fantastic—he's every bit as fast, wild and vicious as he's ever been. As for Sakura, she's a known quantity, and players either like her quasi-Shoto style or they don't. I don't go for the "schoolgirl" thing myself, so I can take her or leave her. I'm sure that more than a few fans are happy to see her make an appearance, though.

Cody & Guy: Although Poison is my favorite Final Fight-er, it was nice to see this pair show up. In general, I find Cody more satisfying to play. He's simpler to use than Guy, and he also packs more of a wallop. The downside to him is that it's irritating to futz around with his throwable knife—it's just a pain, really. Guy serves his purpose in upping the cool ninja quotient, and does it well.

Finally, this DLC also unlocks two PS3-exclusive fighters, Mega Man and Pac-Man, both of whom are essentially gag characters included for the novelty. I feel confident saying that 360 owners aren't missing out on much, although Pac-Man (riding a modified Mokujin body from Tekken) never fails to bring a nostalgic smile to my face. On the other hand, I can't see Mega Man as anything other than an insult to his creator, Keiji Inafune. Although it's been reported that Inafune helped create this iteration of the character before his widely-publicized split from Capcom, he's just too pathetic and worthless for words. Although players will likely never hear it, I'd be willing to bet that there's a juicy story behind this bloated Mega Man.

Overall, the new fighters are (mostly) great additions. That said, it's hard to ignore the fact that these characters were already on the disc, and $20 is a lot to ask for an unlock. However, the ethics of paywalling content is a discussion for a different article. Putting the issue aside for the moment, it's easy to recommend this add-on to players who already enjoy Street Fighter X Tekken

. Without a doubt, it makes a great game even better… Or maybe it just turns it into the game it was meant to be from the start? Rating: 8.0 out of 10.