I've spent a lot of time with Street Fighter x Tekken lately, and although I never would have guessed it, I've been enjoying it a great deal.

If you pressed me on the matter, I'd say that the game can't stand up to the rigorous requirements of players at the top of the field in competition-type settings, but that's okay by me. Although I think I'm decent enough at fighters, I've never been in the top-tier skill level, and don't really want to be.

These days, I'm way more interested in having fun and enjoying myself, and this is a great game to jump into for someone (like me) whose skills have gotten rusty. It's also newbie-friendly, and my son, who has never played a fighting game before, was able to jump right in and start mashing with some good results.

Some may scoff, but the genre needs titles which are simpler and approachable for people who aren't pros—there's nothing to be gained by going ever-more hardcore, and doing so only brings with it a danger of excluding any future fans who can't make it over steep difficulty curves. I'm not saying that competition-class fighters shouldn't exist, I just think fighting game developers have been leaning a little too far to one side lately, so it's a breath of fresh air to see one that isn't so esoteric and technical.

I had the chance to play both PS3 and 360 versions of the game, and I must say that the 360 version looked a lot nicer to my eye. Maybe it's my particular setup or the way the PS3 handles anti-aliasing, but the difference was pretty shocking. That said, I went with the PS3 version since the Dualshock is far superior to the 360's pad for fisticuffs.

At this point I'm not considering doing a second opinion to the review by @TheMirai that's currently up, but I do recommend it to those of you out there who may want to get into a fighter but don't want to spend months trying to achieve a decent level of mastery.

…Plus, it's got the world's greatest tag team of Poison and Lili, so you should buy it for them on principle alone.

In other games news, I completed Lollipop Chainsaw the other night and my review is nearly complete.

This was a fairly easy writeup for me since I didn't find much to praise… I'm certainly aware that Suda51 has his fans out there, but he's one of the most overrated creators in the games industry these days if you ask me, and this title just reinforces my opinion.

Look for my full evaluation soon, but at the moment, I'm comfortable saying that it's crudely produced, not very much fun to play, and quite offensive to a wide variety of people. Although some may try to make a case that it has meaning or commentary content below the surface, I would say anyone trying to make that case is reaching pretty far for something that's barely there.

I don't recommend this game. 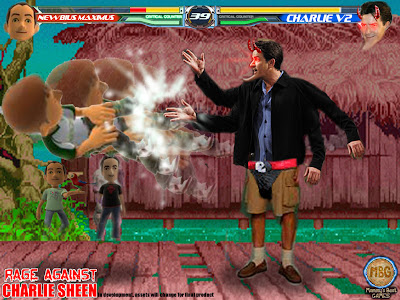 The fine people behind Weapon of Choice, Serious Sam DD and Explosionade are working towards getting a $250,000 grant from Chase Bank and Livingsocial, but in order to be considered, they need at least 250 votes of support.

Although it's annoying and a pain in the ass to log into Facebook for one of these things, please click here and give MBG 30 seconds of your day. I can't think of another studio out there who is more deserving of a cash infusion, and if all it takes is a few clicks to keep them going, then please please please please please do so!

The wife and I had the rare opportunity for a child-free date night, so we went to see Snow White and the Huntsman—big mistake.

To be perfectly honest, the movie felt like it was at least fourteen hours long and it was a struggle to sit through the whole thing. There were a few points at which I felt bored enough to get out of my seat and leave before it was over, but I hung in there and you know what? It never got any better.

I'm not a fan of Kristen Stewart, and she didn't win me over here. Her acting was flat and the numerous close-ups of her face didn't communicate anything to me other than the fact that she's got bags under her eyes and a blank look that she goes to often. She can't take all of the blame, though… nearly all of the performances were lifeless and dull, which leads me to think that the director had no idea how to pull emotions out of his actors. Rather than living, breathing characters, the film felt as though it was full of shallow sketches lacking motivation.

The story was terrible. Coming off as nothing so much as a lite version of The Lord of the Rings with a lot of traditional Snow White elements thrown in, it never came together. There were suggestions of Snow's ability to talk to animals, the poison apple popped up, there were dwarves and such, but it was more like a checklist of things rather than an elaboration of who her character was supposed to be, or why she was so important to the world.

If I had to pick one thing that the movie did well, it was that it attempted to add some motivation and backstory to the evil queen. Although it wasn't as fleshed-out as I would have liked (and I don't think it was done chronologically correct) her character was the one I saw the most potential in… I would have loved if the film gave her more attention, or even made her the actual star. As bizarre as it may seem to have the villain take on the lead role, I think there were plenty of opportunities to do something dramatically different with the Snow White story there. Unfortunately, this bit ended up just as half-baked as the rest. Hopefully someone will fanfic it and do it justice.

I could write another thousand words on the badness of this film, but the bottom line is that it feels like an extended music video with more attention paid to scenic vistas and crazy camera angles than to the plot and relationships of the people on-screen. It's too long, it's too dry, and it was tough to sit through once… I can't imagine ever watching it again.

This has made me excited for your review on Lollipop! I usually agree with you, but I just played through Lollipop Chainsaw over the last week and absolutely adored it. In fact, I described as Magical on no less than two web sites. I’m looking forward to disagreeing with you!

Not going to repeat myself word by word, but I’ll say I hope you elaborate on what you found offensive about Lollipop Chainsaw in your review, as I can’t imagine a game such as this, that begs not to be taken seriously, to be offensive in any tangible way. Also, it’s a must buy for me once its price drops a bit.

I forgot to say that we need more simplistic fighters, kinda like Soul Caliber one or even more simplified IE you have power moves to spam and a basic set of attacks Strong/medium/weak. Modern fighting games go overbaord with 30+ moves per character. I’d rather have a classic SNK fighter in a 3d environment than anything Tekken like tho I have to admit Street Fighter 4 sucks in the fact I feel its going backwards then again this is capcom we are talking about……

I will have to pickup Street Fighter x Tekken and for me Lollipop Chainsaw is such an odd cheasy title its a must buy, its one of the few games I can relax on while I go nuts with it.(kinda like I did with Infernal,Onichanawra,Dark sector,Bayanetta, even if Bayentta was awesome LOL). I tend to get frustrated with serious gaming, you go threw all the trouble to make a semi top tier title then fudge on gameplay or level layouts or balance….